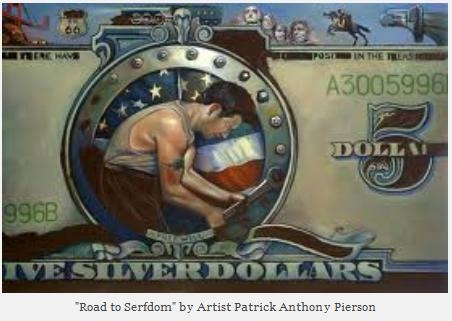 By: Jim Hoft with Andrea Ryan

On cue, America’s credit card is maxed out again.  And, on cue, our pompous Demogogue-in-Chief emerged before America, feigning command over the situation.  Predictably, Obama preemptively scolded Congress for their anticipated reckless and ideological misbehavior and fighting.  Because, they can’t “hold the American and global economy hostage to one party’s ideology”, since it’s their “responsibility to ensure that the U.S. pays its bills and maintains its creditworthiness”.

“During lunch at the White House with top leaders of the House and Senate, Obama called the political deadlock last year “not acceptable” and emphasized that he expects a “serious bipartisan approach” to tackling the budget and the federal deficit this year, White House press secretary Jay Carney said.

Obama stressed the need to “avoid fighting old political fights,” Carney told reporters after the meeting. “It’s simply not acceptable to hold the American and global economy hostage to one party’s political ideology. It’s the responsibility of Congress to ensure that the United States of America pays its bills, maintains its creditworthiness.”

Meanwhile, as Obama was admiring himself before his audience, the Senate Democrats were busy refusing to pass a budget.  Again.  Republicans proposed four fiscal blueprints for responsible spending, and the Democrats rejected all of them.  And, of course, proposed none of their own.  Again.  In complete violation of the law, it has been over 1,100 days since our country has had a budget.  That is obscene on so many levels, but, most importantly, because it creates an unnecessary and imminent threat to the stability of our country, and our national security.

According to The Washington Times,

The Senate on Wednesday rejected every single budget being offered this year, leaving the chamber - and therefore the federal government - without a plan to address Medicare, Social Security and the other major entitlement programs that are driving deficits and debt.

In repeated votes, Democrats who control the chamber defeated four Republican proposals, including a plan that passed the House in March. The entire Senate also unanimously rejected President Obama’s 2013 budget, voting 99-0 against it, following a 414-0 vote against it in the House earlier this year.

Congress is required by law to pass a budget by April 15, then write the annual spending and tax laws to carry out the budget’s targets.

But for the third straight year, Democrats didn’t offer a plan of their own in the Senate. The last time it did pass one was in 2009, when Democrats controlled all the levers and wrote the measure that paved the way for them to pass Mr. Obama’s health care law.

In other words, the Senate Democrats are “holding the American and global economy hostage to their political ideology” and betraying their “responsibility to ensure that the U.S. pays its bills, and maintains its creditworthiness.”  But, to protect the U.S. against a horrific fate would require a budget…something the Democrats refuse to provide.

Not far from here lies Greece, a once proud country built on an ancient foundation of historical greatness.  A country that has declined into complete fiscal, social, and political chaos because of the failure of a grand scheme by its citizens to borrow and spend their way into prosperity.  Their government is in shambles and the citizens are cleaning out the banks in droves.  Who needs Spartans when a country can be reduced to a scene of carnage simply through its debt and governmental incompetence?

In "The Road to Serfdom", Friedrich von Hayek labeled what we are witnessing today.

“Everything which might cause doubt about the wisdom of the government or create discontent will be kept from the people. The basis of unfavorable comparisons with elsewhere, the knowledge of possible alternatives to the course actually taken, information which might suggest failure on the part of the government to live up to its promises or to take advantage of opportunities to improve conditions--all will be suppressed. There is consequently no field where the systematic control of information will not be practiced and uniformity of views not enforced.”

But, concurrent with Washington's spectacular display of insanity and Obama's passionate drive to divert America's greatness, economic freedom, and liberty into serfdom, Mitt Romney was in the Heartland giving a speech about our crisis of debt.  Romney's message, calling Obama's "prairie fire of debt" a "nightmare mortgage for America", was smartly wrapped in the imagery of a prominently displayed national debt clock.

Obama's failed policies of Socialism are taking us down Hayek's road.  If we don't change direction we might as well hold the chains ready for our children.

I would sincerely like to think that our representative and senators would have the guts to stand up and do what is right. This uncontrolled spending is destroy our country, and all that I have seen is the constant kicking the issue down the road for the next group to deal with. One day the road will end, but I will not get my hopes up that we we see some examples of backbone.

Why all this whistling past the barnyard...??? Let's call a spade a spade. Change the doggarn monetary system.

Remove the "legal tender" protection from the Federal Reserve Note given to it by the Coinage Act of 1982. Let private banks again create a redeemable currency.

Thereafter, let's find out which currency the public prefers, whether the redeemable currency or the irredeemable FRN. Restraining spending by Congress doesn't solve anything, except to plunge the present monetary system into the abyss.

Let's reestablish a redeemable currency to put people back in charge of their own money, instead of letting Congress, the Fed and the big banks create and circulate this irredeemable Federal Reserve Note currency. Let's do it while the irredeemable FRN still has some value. That way, the FX markets can sort out the mess.

Talking about cuts in spending is a distraction. It's fostered by the elites, be they Democrat or Republican, to convince us to maintain the central banking system. The average American should reject such notion for his own good. It's time that Americans are allowed to earn a currency again which they can save and invest without having to worry that the government will steal its value.

"There is no practice more dangerous than that of borrowing money."
George Washington