Chart: Federal spending and receipts in one image (FY 2013) 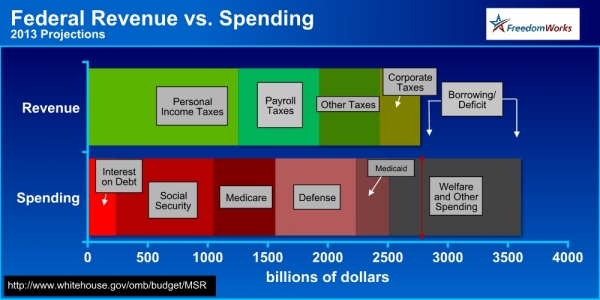 [Source: White House OMB Mid-Session Review, summer 2012. Data does not reflect enactment of H.R.8, the so-called Fiscal Cliff bill, enacted in January 2013. This chart was compiled by FreedomWorks staff Dean Clancy and Hayden Smith, 1/16/2013, based on a suggestion by James Arthur of Tennessee.]

What does this chart tell us? Five things, in my opinion:

1. We are living beyond our means.

2. We are not undertaxed, we overspend.

3. Entitlements are eating us alive. (Washington is becoming a big "insurance" company with an army.)

4. If we ever had to stop borrowing -- if we ever hit our statutory debt ceiling -- there would still be enough money coming in to pay bondholders (principal and interest), retirees, and our troops. We wouldn't "default." But we would have a cash-flow crunch and a temporary, partial government shutdown.

5. This is what happens when you don't pass a budget. The Senate has failed to pass a budget for nearly four years now, despite a statutory requirement that they do so by April 15 of each year.

Remedy: The President should propose, and Congress should pass, a balanced budget. If that's deemed "too hard," then Congress should at least take a first, baby step and simply pass a budget.

The House leadership has announced plans to vote on a budget that not only balances over time, but does so within ten years, and without raising taxes. That would be a huge improvement over our current mess.

The Senate should do the same.

TAKE ACTION. Sign our petition and help us tell the Senate: "DC, Do Your Job!