A Community of Hope

Last week Tea Party groups from across the nation made headlines for being the subject of targeted attacks by the IRS.  They bravely came forward to tell their stories of being victimized by the largest and most powerful US government agency.  They are heroes for refusing to relent under intense scrutiny and pressure.  They would not be silenced and they would not quietly stand aside.  Instead they chose to gather with like minded people in an effort to strengthen and serve their communities and their country by exercising their First Amendment rights.

They're heroes again today, even if they're not in the headlines.

Moments after the news reports started flooding in and spotlighting the devastating results of the tornado that hit Moore, Oklahoma, Tea Party activists kicked into high gear to help those affected. 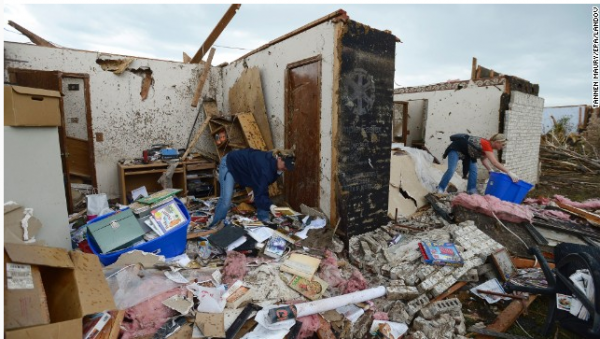 On twitter, I immediately started seeing conservative activists I knew from around the country offer their support. I sent out a few tweets and within no time I had responses from all over the country. People willing to donate time, vehicles to transport supplies, money or whatever was needed. I reached out to the people at Mercury One and asked how I could help and was immediately contacted back with directions on how to coordinate volunteers and supplies.

Dana Loesch inquired in a few tweets about people in the St. Louis area who may be willing to haul supplies to Oklahoma.  Within a matter of hours, she was literally overwhelmed with offers to truck water, supplies, food, generators and anything else. Her convoy of trucks has been added to the relief efforts being spearheaded by Beck's charity. 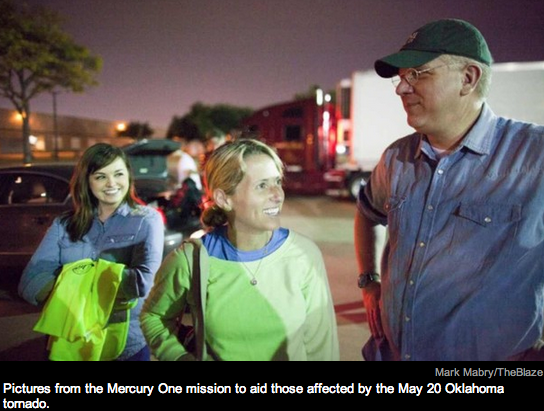 FreedomWorks has focused its efforts over the past several years on empowering people at the local level to make a difference in their communities. Glenn Beck and FreedomWorks have had a great partnership for a while and though it has been more political in nature, it has always centered on the idea that people are most effective when they are empowered to act from the ground up.

What I saw last night was the culmination of this relationship benefitting people in likely the most devastating moment of their lives; regardless of ideology.  Convoys of supplies arriving in Oklahoma to meet the tangible needs of a devastated community; in less than twelve hours.  This is the community that the liberty movement has helped foster.  It is a community built on the knowledge that at times in our lives everyone needs a little help and that there are good people willing to give it.  It is a community that understands America was built on the individual being good, and decent and kind, and often giving more than anyone could imagine.

Support efforts are continuing around the clock.  FreedomWorks is partnering with TheBlaze radio on Thursday, May 23rd for a 24 hour radiothon to raise money for the Mercury One charity.  One hundred percent of proceeds go to the Oklahoma disaster relief effort. People are organizing relief efforts on FreedomConnector now as well.

FTR Radio  along with Smart Girl politics, is also sponsoring a three hour radiothon Thursday Night from 8pm-11pm. All proceeds from this event will also go directly to the disaster relief effort. Guests scheduled to appear so far are SE Cupp, FoxNews' Monica Crowley, Dana Loesch, Erick Erickson of Redstate.com, myself and many, many more.

It is very easy to focus on the loss and the devastation when a tragedy like this occurs.  There is no way to replace what has been lost for so many in Moore, Oklahoma.  It would be easy to sink inside ourselves, but as a nation, that's not who we are.  We help.  We serve.  We sacrifice.  I'm reminded of this quote by Martin Luther King Jr.

Life's most persistent and urgent question is "What are you doing for others?"

It's a good question to ask every day, not just today.