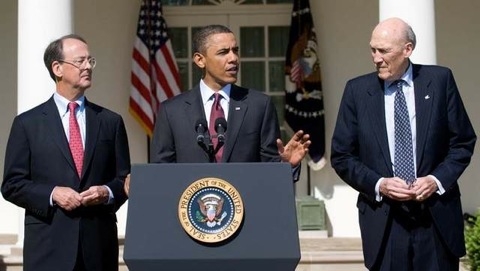 With much of official Washington and the press currently focusing on Bowles-Simpson as a nonideological, "centrist" way for the GOP-led House to strike a deficit-reducing "grand bargain" with President Obama and the Democratic Senate, fiscal conservatives need to keep a close eye on this plan.

The goal of Bowles' and Simpson's effort has been to find a mix of spending cuts and tax hikes that Democrats and Republicans can live with. The biggest difference between this new iteration and the version the two men proposed in late 2010 is the new version would means-test Medicare benefits and raise the Medicare eligibility age.

Here are the published details of the updated Bowles-Simpson Plan, with my comments:

Comment: This amount of deficit reduction would help to slow the growth of our national debt as a share of the economy, but would not stabilize that figure. To stabilize debt as a share of GDP, you must get deficits below 3 percent of GDP. Bowles-Simpson doesn't eliminate enough spending to get us below 3 percent of GDP. The real goal should be to get to 0 percent, that is, to balance the budget. We can do that easily, without significant disruption, within ten years. (We really ought to do it within five years.) To balance within ten, we will need at least twice the level of deficit reduction as Bowles and Simpson propose; that is, we'd need to close the deficit by at least $5,000,000,000,000 over ten years. Evidence from other countries shows that the best way to do that, if you want to promote economic growth and job creation, is to reduce spending and not to raise taxes. And the simplest and gentlest way to cut spending would be to adopt the so-called "penny plan," which would reduce all federal spending by just 1 percent in real terms, every year, until the budget is balanced. If we adopted the penny plan today, the budget would balance in eight or nine years at most.  The plenny plan would be enforced by sequesters (automatic, across-the-board spending cuts), but these sequesters could be set aside whenever Congress enacts specific savings to keep under the caps. One could think of Bowles-Simpson as a "farthing" plan, since it effectively reduces spending by only one-fourth as much as the penny plan.

On Medicare, the plan would save an estimated $600,000,000,000 over ten years, as follows: Reduce provider payments; reform patient cost-sharing; increase premiums for higher-earners; adjust benefits to account for population aging; reduce drug costs; and improve provider and beneficiary incentives.

Comment: Except for increasing patients' health insurance deductibles, a key reform necessary to get health care inflation under control, most of these Medicare proposals aren't true reform, but rather straight benefit cuts and/or bureaucratic meddling in the doctor-patient relationship. They also provide a foretaste of what life will be like for all Americans if we allow the President's health care law to take full effect next year.

On taxes, the plan would produce an estimated $600,000,000,000 in new receipts over ten years, as follows: Eliminate or scale back most tax loopholes, and use resulting savings for deficit reduction and to reduce tax rates and simplify the tax code.

Comment: This is good policy. Ending tax breaks to corporations and private industries is especially needed. But the loophole closures must not be "means-tested," that is, schemes for raising effective tax rates on higher-income individuals. Those rates are already unfairly and damagingly high.

Comment: All of these reforms sound either good or promising; but more details are needed. Note that the spending caps would only apply to the one-third of federal spending that is annually appropriated; the remaining two-thirds, currently on auto-pilot, would not be capped. Also, while chained-CPI is a more accurate measure of inflation than the current CPI, it could be easily politicized, to the taxpayers' detriment. To avoid this, chained CPI should be applied consistently to ALL government spending and tax programs, or not at all.

More details are needed, but so far the updated Bowles-Simpson contains a mix of good, promising, and bad policy proposals.

The plan's bad proposals are mostly found under the heading of Medicare. Except for increasing deductibles, which would be a good reform, these proposals amount to needless benefit cuts and/or more gvernment meddling in the doctor-patient relationship. They provide an ominous foretaste of life for all of us under the President's health care law.

Instead of more government mandates, rationing, and price controls, we need to get the government out of health care financing. The private sector can provide good, safe, high-quality health insurance for all, at affordable rates -- provided patients and not bureaucrats control the dollars and call the shots.

America needs patient-centered reforms like 100% deductibility of medical expenses and broadly available Health Savings Accounts (HSAs). We must also make all health insurance programs truly voluntary. Congress should immediately repeal the mandatatory participation provisions in Medicare and the President's health care law. Only with these kinds of market-oriented reforms can we ever hope to liberate patients and doctors to lower health care costs and prodce better health care for everyone.

Bowles-Simpson has always been hard to take seriously, because it contains a massive omission: It doesn't touch the President's health care law. That law has not yet taken full effect, yet is already driving up health insurance premiums (in anticipation of the law's costly mandates). And it threatens to cause between 7 and 20 million Americans to lose their employer-sponsored health benefits (due to employers "dumping" their workers into the new government-run "exchanges" to save money).

This would be a highly credible deficit-reduction package -- one that would not only stabilize the debt-to-GDP ratio, and thus shore up Uncle Sam's credit (heading off avoidable interest rate hikes), it would also help reduce health care cost growth and increase long-term economic growth.