Chicken, Alaska is a tiny community 30 miles west of the Canadian border and about 300 miles east from Fairbanks. With an official population of 7, Chicken has no electrical service, telephones or central plumbing. 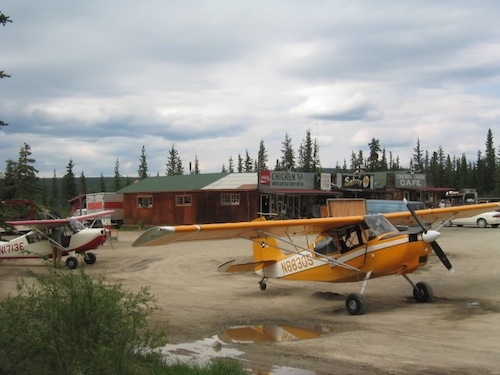 Needless to say, the quiet band of residents was shocked to see a SWAT-style squad pour out of the wilderness wearing full body armor demanding answers. Was it an attempt to break up a terror cell, arrest drug runners, or rescue endangered women, children and puppies?

The greater Chicken metroplex (pop. <100) is home to a few independent gold miners. These old-school prospectors dig up dirt from their claim area, place it in a sluice box and use water to wash away everything that isn’t gold. Not exactly open-pit mining.

“Imagine coming up to your diggings, only to see agents swarming over it like ants, wearing full body armor, with jackets that say POLICE emblazoned on them, and all packing side arms,” said C.R. “Dick” Hammond, a Chicken gold miner who got a visit from the task force.

“How would you have felt?” Hammond asked. “You would be wondering, ‘My God, what have I done now?’”

An isolated miner carrying gold easily could have mistaken the raids as a robbery attempt and reacted accordingly. Local miner David Likins is thankful no one got hurt. “If it were my mine, and I was sitting on some gold, and people came storming out of the woods, I would probably meet them on the porch,” he said, hinting at a Bidenesque confrontation.

The miners understandably felt intimidated by the government’s extreme tactics and successfully requested that their senators and representatives look into the matter. The EPA eventually sent a junior representative to Chicken, but he didn’t offer many answers.

Ken Fisher, the EPA’s Deputy Director for Alaska, claimed the officers were armed because Alaska State Troopers warned of drug and human trafficking. But the Troopers laugh at that claim — there isn’t much demand to smuggle contraband between unpopulated rural Alaska and the unpopulated Yukon Territory.

Fisher later claimed the EPA had evidence of severe water quality violations, and targeted dangerous miners with past violations. But to date, no charges have been filed against any Chicken-area miners and several of those raided had never received so much as a citation.

Alaska Governor Sean Parnell has called for a special counsel to investigate the task force’s tactics, but he worries how the feds will respond. “My next concern is that people might now be facing trumped-up charges because the EPA is trying to justify its actions,” Parnell said. “I don’t believe we are getting all the facts.”