The federal government grows while the private sector withers

As I noted back in March, Americans are more dependent on the federal government than ever before:

For the first time since the Great Depression, Americans are receiving more money in government aid than they are paying in taxes.

Well, according to analysis found in this morning's USA Today, government payouts are rising even further.  After reviewing federal data, USA Today found that taxpayer funded benefits such as Social Security, unemployment insurance, food stamps and other programs have risen to record levels during the first three months of this year:

Those records reflect a long-term trend accelerated by the recession and the federal stimulus program to counteract the downturn. The result is a major shift in the source of personal income from private wages to government programs.

In the first quarter of 2010, individuals received 17.9% of their income from government programs; that is up from 14.2% when the recession began.  Entitlement spending on programs for the elderly, poor and unemployed has grown and the passage of President Obama's healthcare reform bill promises to further this trend.  Moreover, analysis shows that an additional 9.8% of personal income was paid as wages to government employees.

In addition to this growth in government dependency, major shrinkage in the private sector has occurred:

Paychecks from private business shrank to their smallest share of personal income in U.S. history during the first quarter of this year...

A record-low 41.9% of the nation's personal income came from private wages and salaries in the first quarter, down from 44.6% when the recession began in December 2007.

This shift represents a serious problem because federal programs are paid for--in part-- with tax dollars collected from those working in the private sector:

The federal government depends on private wages to generate income taxes to pay for its ever-more-expensive programs.  Government-generated income is taxed at lower rates or not at all...

But, with unemployment high at 9.9 percent and the Obama Administration’s 2011 budget forecasting that it will remain close to double-digits for the next two years, there is little indication that this movement away from the private sector and toward the government dole will reverse itself any time soon.

When our founding fathers formed America, they envisioned a nation full of individuals who are independent from the shackles of government.  They did not foresee a country full of citizens depending upon government payouts for their livelihood.  Now is the time for the federal government to take steps to reverse this trend.  It must work to restore the independence of its citizenry by removing the burdensome regulations and job-killing taxes that force many Americans to turn to government aid in the first place. 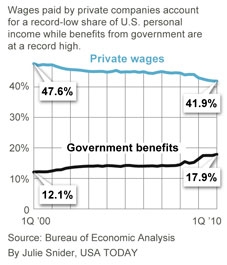