The Foxiness of Property Rights 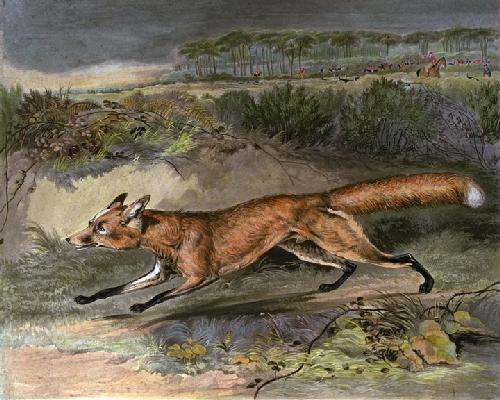 Pierson v. Post, one of the first cases studied in law classes, is a story about a couple of New York hunters, a fox, and a lucky catch back in 1805. And yet, 200 years after the decision was made, this case is viewed as a cornerstone of how America views private property rights.

On a fine winter morning, Post, an avid fox hunter, woke up early and caught onto a fox trail, following his dogs in a miles-long pursuit of the fox through the afternoon. Right when he was gaining ground and about to overcome the fox, Pierson, another hunter, came into his path and shot the fox. The two men argued adamantly about whose property the fox was. Post claimed ownership because he had invested so much time but Pierson stated that since he was the one who physically caught the fox, it belonged to him. Filing a claim in the New York State Supreme Court, Post sued Pierson for stealing his fox.

So, why is this important and still studied today? Because, when it’s all boiled down, this is about more than just a fox. It’s about whether an individual’s right to an object originates from physical ownership or from invested resources, such as time, labor, and capital. The Court ruled in favor of Pierson, determining that obvious, physical possession of an object is the clearest way to establish whose property it is, thus creating the correct precedent to establish clear property incentives in the future.

After all, imagine a world where property rights were based on effort rather than physical possession? Wait… would there even be that big of a difference? In hunting, the answer is obvious. If you aren’t the one taking the shot, you don’t get the pelt, the meat, or the cool wall hanging. However, you can’t help but feel like Post got the short end of the stick – after all, the poor man was in it for the sport of the chase and had spent all morning out in the woods. Yet, when you apply the court’s decision to a different industry, the Court’s method of madness comes to light.

Take the industry of invention, for example. Let’s say that Suzie has a great idea for the next vegetable chopper and tries time and time again to design and market it correctly but after years, still hasn’t found success. Sam then enters the scene with a late-night dorm room creation, the vegetable chopper to outsell all others, and becomes a millionaire instantaneously. Should Suzie, who put so much effort into the industry, get some kickback for her time and effort even though she didn’t succeed? Of course not. That’s not the way the market works. She didn’t take the shot that killed the fox.

Ah, so *Pierson v. Post *is about more than just a fox. Its constant study by students never fails to start a debate of fairness versus the real world reality of winner takes all. When it comes to property rights, Pierson v. Post established the right precedent for American law in relation to private property rights. If you kill the fox, you get the reward, even if it was a lucky shot. As for the chasers, the lessons they learn, the trials and errors they experience, and capital they invest get cycled into the market system and benefit society in one form or another. All industrial or private investment, especially intellectually natured, keeps our economy turning and society moving forward… even if we do harken back every now and then to learn about two fighting fox hunters in the 1800s.

Wow, I really like the post. I do think that the property law in our country should be changed a little bit. The changes would not only help the government but also the people. I think the private property right should undergo some major changes. Learn more about property related issues here. http://www.mwfloridalaw.com/real-estate-selling-contract-101/