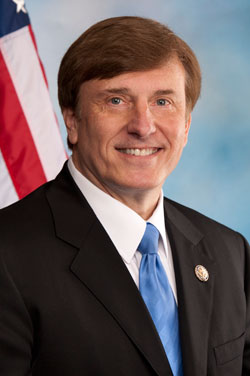 Rep. Fleming represents Louisiana's 4th District and is our Congressman of the Month for August.

Each month, FreedomWorks will spotlight a Member of Congress who embodies our key principles of less government, lower taxes, and more freedom. For the inaugural edition of FreedomWorks’ Congressman of the Month program, we’re highlighting Rep. John Fleming of Louisiana. Fleming was one of the first to join the House Freedom Caucus, and has been a consistent voice for liberty in Congress, since he was first elected in 2008.

A physician by trade, Fleming has demonstrated a willingness to lead on the health care debate that many of his colleagues lack. In 2013, he worked with the Republican Study Committee to introduce the American Health Care Reform Act, one of the most conservative alternatives to ObamaCare to b seriously proposed. Fleming was also a key player in the 2013 fight to defund ObamaCare.

Fleming’s opposition to ObamaCare has not weakened. Last month, he introduced the Helping Save Americans’ Health Care Choices Act, to promote and expand the use of health savings accounts. Health savings accounts are a better alternative to third party payer systems, because they promote price transparency and competition among health care providers. When patients see where their money is going, they act to spend it more wisely, encouraging lower prices and better services across the sector.

Fleming’s bill raises the current contribution limits on Health Savings Accounts, allows spouses access to the accounts, expands the number of services covered by the accounts, and expands eligibility for the accounts. These type of reforms are essential to reduce the cost of actual health care, as distinct from tinkering with insurance markets as the Affordable Care Act and many competing proposals have tried to do.

Fleming has proved to be an uncompromising defender of freedom in other policy areas as well. Where many were tempted to accept minor reforms in large legislative packages this year, Fleming rejected the argument that we have to give up a lot to get a little. He opposed the USA Freedom Act, arguing that it did not go far enough in protecting Americans from domestic spying, despite heavy pressure from inside his own party.

Fleming took a similar stand on the Student Success Act, a reauthorization of No Child Left Behind that admittedly would make a number of positive reforms. But Fleming’s dedication to the Constitution, which provides no role for the federal government in education, led him to oppose the bill on principle, especially impressive given the Majority Whip’s personal commitment to the bill.

Fleming has also proved that he is not afraid to stand up to House leadership, being one of the Members who opposed the rule to advance trade legislation, earning the vocal ire of Speaker John Boehner. This was the same vote that almost cost Rep. Mark Meadows his subcommittee gavel.

For being a principled leader who continues to work tirelessly to reform the health care system and bring back constitutionalism to Congress, we’re proud to name John Fleming our Congressman of the Month!

Congressman of the Month for October 2016: Rep. Warren Davidson

Rep. Warren Davidson (R-Ohio) is FreedomWorks’ Congressman of the Month for October 2016 for his continued work on behalf of taxpayers and our veterans.

FreedomWorks is pleased to name Rep. Jeff Duncan (R-S.C.) as our Congressman of the Month for August 2016 for his continued fight to uphold the Constitution and promote free market principles and limited government. Just last month, Rep. Duncan was presented with the FreedomWorks FreedomFighter award for his votes and legislation in the 2015 congressional year. With a FreedomWorks lifetime scorecard rating of 96% and a score of 100% in 2015, Rep. Duncan is a consistent and principled warrior for the taxpayers, fiscal common sense, and the Constitution.

FreedomWorks is pleased to name Rep. David Schweikert (R-Ariz.) as our Congressman of the Month for July 2016 for his continued fight to reign in government waste and spending. As a testament to his unwavering commitment to free market principles and the Constitution, Rep. Schweikert was presented last week with the 2015 FreedomWorks FreedomFighter Award. With a FreedomWorks lifetime scorecard rating of 96% and a score of 100% in 2015, Rep. Schweikert has earned the trust and the respect of taxpayers across the nation.

FreedomWorks is pleased to name Rep. Mark Sanford (R-S.C.) our Congressman of the Month of May 2016 for his steadfast commitment to conservative principles. Just last month, Rep. Sanford took on Washington’s corporate interests on behalf of the taxpayers.