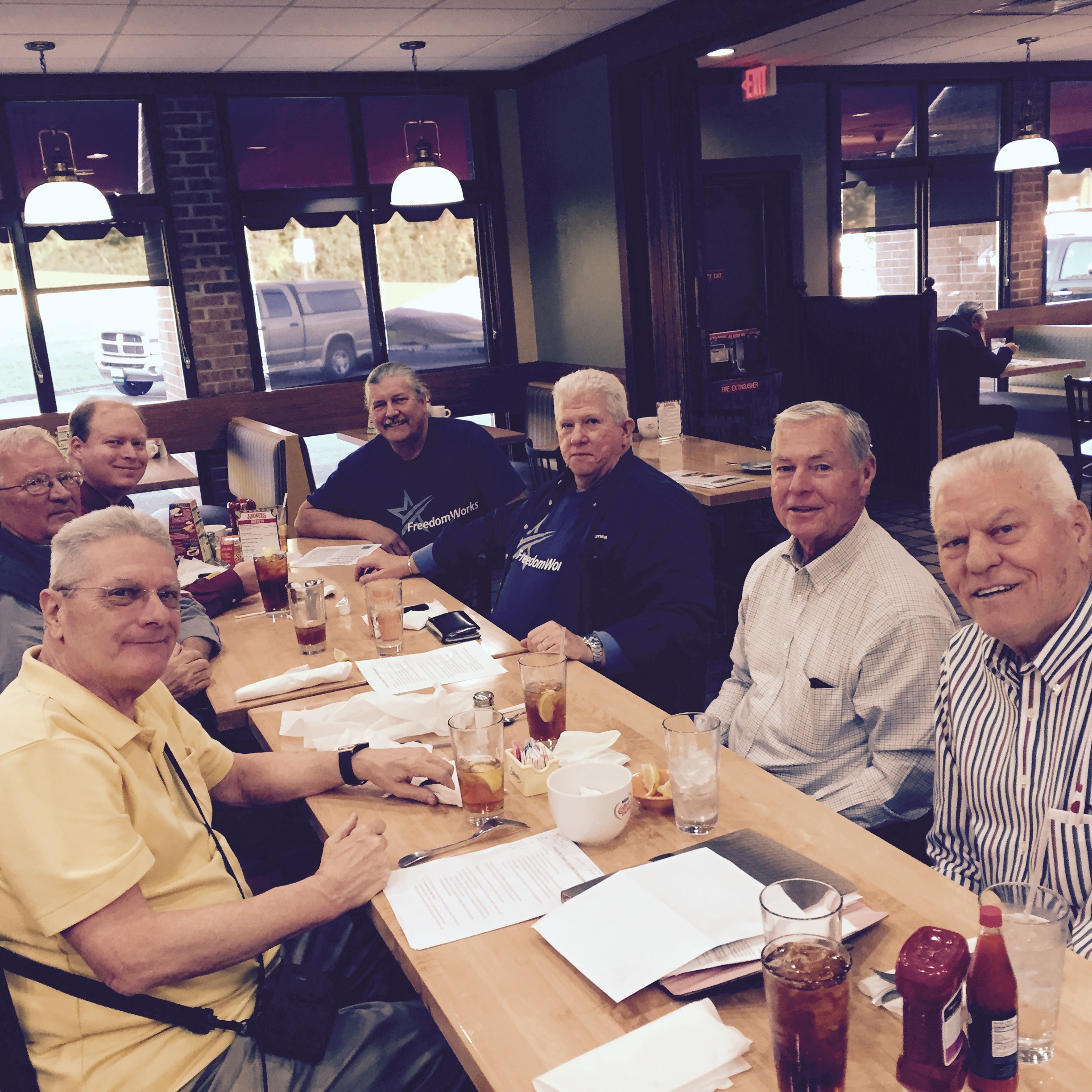 Monday, October 19 was an interesting day for justice reform in Virginia! I was pleased to gather with activists from the Southwest Virginia Tea Party at the Shoney's in Bristol, Virginia to talk about justice reform. We then traveled to the county courthouse for a GOP meeting where their state senator, Bill Carrico was going to address questions asked in the letters he has been receiving about civil asset forfeiture. On October 8, we had gathered to write letters to Senator Carrico.

Doug Fleenor: Senator Carrico explained the need for asset forfeiture by saying that "we are dealing with major drug dealers, terrorists, and al-Qaeda." Doug Fleenor responded, "We can't beat down every bad person in the world. We have got to stand for liberty! They [the police] are encouraged to [abuse civil asset forfeiture] because it feeds the beast [brings in money]! Is getting one out of ten bad guys worth trampling on the rights of individuals?"

Joe Ferrell: "Will you push it? When will [a reform bill] come up again ?"

Don Waterman: Senator Carrico had stated that he could not find even one example of civil asset forfeiture having been used in the state of Virginia! Don Waterman asked the Senator if he had not heard of Mandrel Stuart. There are numerous examples of asset forfeiture abuse in Virginia. The Mandrel Stuart story was widely publicized. Mr. Stuart was stopped by Fairfax County Police. The owner of a small barbecue restaurant in Staunton, Stuart had nearly $18,000.00 in cash that he planned to use to purchase equipment for his restaurant. The police seized the cash, alleging that the money was connected to drugs.

Stuart was never charged with a crime. After a lengthy legal fight, Stuart was able to get his money back but lost his business in the process. Senator Carrico responded that he had not heard of Mandrel Stuart and wrote down information provided by Don.

Precious. Next up, there will be a very, very important meeting at the local Waffle Barn.

On behalf of the FreedomWorks activist community in Pennsylvania, I urge you to support the amended version of Senate Bill 869, sponsored by state Sen. Mike Folmer (R-Lebanon). The bill reforms the Commonwealth’s civil asset forfeiture laws to provide more protections for innocent property owners.

Ahead of a scheduled vote in the House of Representatives on the Clyde-Hirsch-Sowers RESPECT Act (H.R. 5523), which addresses the Internal Revenue Service’s abuse of federal civil asset forfeiture laws, FreedomWorks CEO Adam Brandon commented:

Join Us This July for Our Justice Reform Campaign on Twitter!

The United States is THE world leader in incarceration. Over the last 10 years, however, the justice reform community has pushed in the direction of smart, evidence-based methods to reduce crime and improve public safety. States like Texas and Georgia, and more recently Alaska, Kansas, and Maryland, have discovered value in moving away from the “Tough on Crime” stance of the 80s and seeking reforms that reduce monetary costs and bring about significant savings for taxpayers. Champions of the cause like Senator Rand Paul, Senator Mike Lee, and Representative Justin Amash, are leaders of strong conservative and constitutional values, all scoring lifetime ratings of 99 percent or 100 percent on the FreedomWorks’ Congressional scorecard.

FreedomWorks and the U.S. Justice Action Network today urged the Ohio Senate to take action on civil asset forfeiture reform legislation, HB 347. This bill would restore due process rights in forfeiture cases and protect the private property of innocent owners. Since June 13, FreedomWorks has driven more than 10,600 emails to Ohio Senate Democratic and Republican leadership urging them to quickly move HB 347 through the upper chamber.