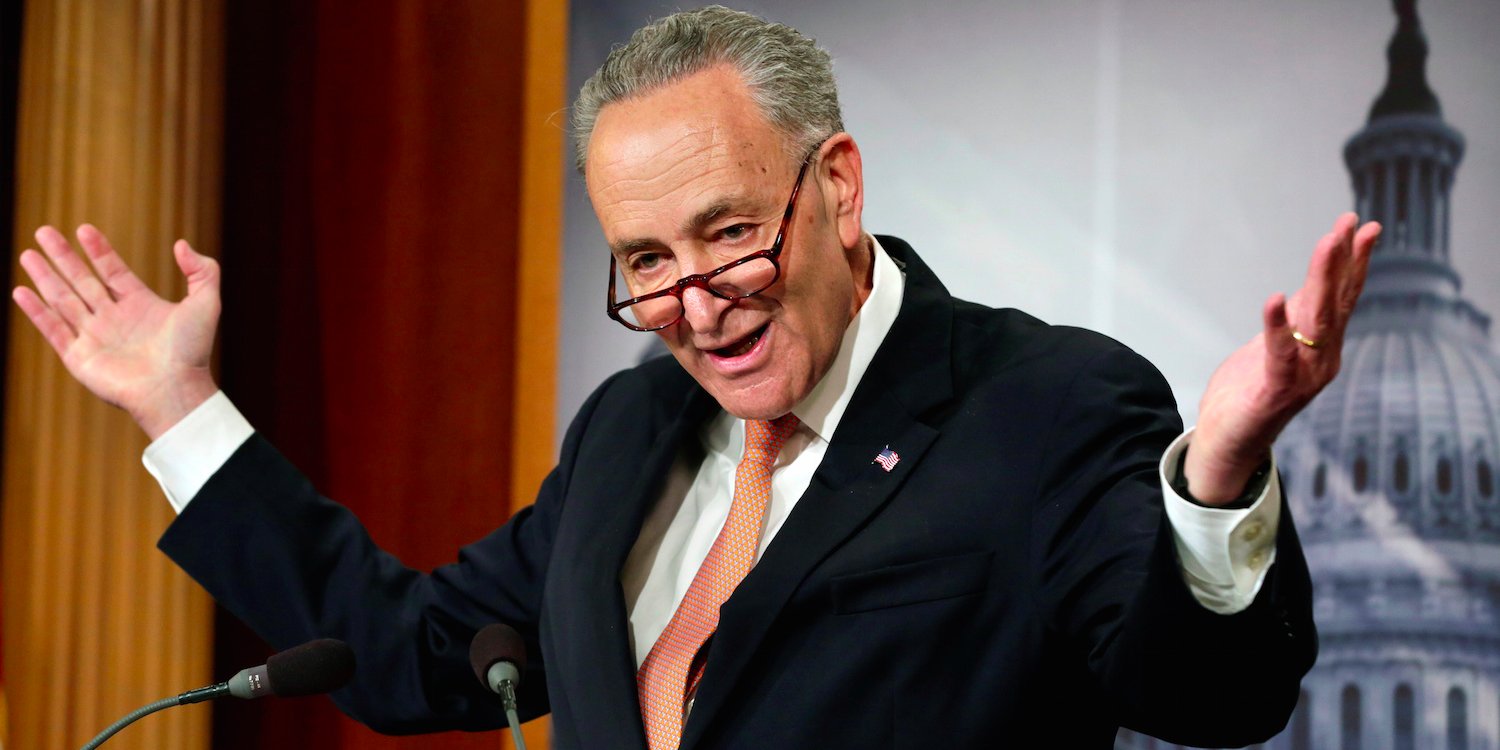 There could be a resolution relatively soon. The Senate is expected to vote at 1:00 am Monday morning on a modified continuing resolution, which could get enough support to break the Democratic filibuster. Any changes would have to go back to the House for approval before going to the White House for President Trump's signature.

FreedomWorks hasn't engaged much on this continuing resolution. We neither supported nor opposed the bill. We're aware that congressional leaders are negotiating a deal for the next government spending bill that would bust the spending caps, and we do plan to oppose that bill should it come up for a vote in either chamber. Additionally, we don't engage on immigration policy in Congress. But in this post, we'll go over some of the causes of the shutdown, when it could end, and set the record straight on some of the other issues involved.

Democrats are using the filibuster to block the spending bill.

There has been a lot of misleading statements over the course of the past few days about this being a Republican filibuster or that this is the first government shutdown under one-party control of the White House and Congress. The fact is that it takes 60 votes to get most things done in the Senate, including appropriations bills or continuing resolutions, and, as of January 3, Republicans control only 51 seats in the Senate.

Unless there is universal agreement and no senators objections to motions by the majority leader, there are three votes on any piece of legislation that comes before the Senate. The first is the motion to proceed, which ordinarily takes 60 votes to approve but can require only 51. The second is on cloture. This vote limits debate to 30 hours and requires 60 votes to approve. The final vote is on final passage, a 51-vote threshold.

The Senate received the House message to the continuing resolution, H.R. 195, after it passed the lower chamber. This was a procedural move by Majority Leader Mitch McConnell (R-Ky.). A motion to proceed to the message requires only 51 votes, preventing a filibuster. The tactic wasn't needed, as the Senate approved the motion to proceed Friday afternoon by a vote of 97 to 2. Sens. Mike Lee (R-Utah) and Rand Paul (R-Ky.) were the two votes against the motion. Both senators oppose short-term spending bills, and they also dislike these bills are used to further busting the spending caps.

Shortly before midnight on Friday, Leader McConnell attempted to invoke cloture, which requires 60 votes. The vote failed by a vote of 50 to 49. Now, five Republicans voted against cloture, but for different reasons. Sen. Jeff Flake (R-Ariz.) wants something done on deferred action for childhood arrivals (DACA) and voiced his displeasure with the lack of action by voting against cloture. Like Sen. Flake, Sen. Lindsey Graham (R-S.C.) voted against cloture because of the lack of action on DACA. He's also a defense hawk and believes short-term spending bills hurt the military. Sens. Lee and Paul also voted no for the same reasons they voted against the motion to proceed. Leader McConnell originally voted yes, but he switched his vote to reserve the right to bring H.R. 195 back to the floor later.

In June 2012, frustrated by Congress not passing the Development, Relief, and Education for Alien Minors (DREAM) Act, President Barack Obama announced that his administration would defer deportation action on illegal immigrants who entered the United States as minors. As of 2017, some 800,000 people who illegally entered the United States as minors were shielded by the policy. Most Republicans blasted the policy change because it was another example of President Obama unconstitutionally subverting Congress.

President Trump rescinded the deferred action for childhood arrivals (DACA) policy in September, although delayed until March to give Congress enough time to come to a legislative agreement on the issue. The White House had been negotiating with a bipartisan group of senators -- including Dick Durbin (D-Ill.) and Lindsey Graham (R-S.C.) -- but no agreement had been reached.

President Trump has indicated that he would sign a resolves DACA, but he also has his own immigration policy priorities like the border wall with Mexico. Although Minority Leader Chuck Schumer (D-N.Y.) offered to discuss the border wall in a meeting with President Trump. Such a discussion, in which there were no guarantees, was reportedly declined. The White House denies that the border wall was discussed and has said that President Trump will not negotiate on DACA or anything related to it until Congress passes a CR and reopens the government.

Democrats object to the length of the spending bill.

As passed by the House, H.R. 195 would fund the federal government through February 16. Senate Democrats rejected this. Republicans are have countered with an offer of February 8, and Democrats have said that they wouldn't agree to a spending bill that went past the end of January. Of course, this timing of Democrats' demand fits with President Trump's State of the Union address, which is scheduled for January 30. It's a political play, for sure, because another shut down could loom over an important speech during which the president will lay out his agenda.

Spending caps are also an issue.

Yes, the Children's Health Insurance Program expired on September 30, but states had adequate funding through January 19.

It's true that the authorization for the Children's Health Insurance Program (CHIP), which provides health insurance coverage for close to 9 million children who may otherwise lack coverage, lapsed at the end of September. A July 2017 report from the Medicaid and CHIP Payment and Access Commission (MACPAC) indicated that only three states -- Arizona, Minnesota, and North Carolina -- and the District of Columbia would exhaust funds for the program by the end of 2017. Several other states would exhaust funds in January.

Although fiscal conservatives and libertarians have plenty of issues with the program, reauthorization of CHIP wasn't ever really a question. There is more than enough support for the program in Congress to do so. In fact, the House passed its vision for reauthorization -- the CHAMPIONING HEALTHY KIDS Act, H.R. 3922 -- on November 3. Although the Senate Finance Committee marked up and approved a reauthorization bill, it wasn't brought to the floor for a vote.

Part of the most recent continuing resolution included additional funding for CHIP, ensuring that there wouldn't be any lapses. The spending bill currently being filibustered by Democrats in the Senate would reauthorize the program for six years.

The federal government is really only partially shut down.

Virtually none the more than 2.8 million federal employees will receive a paycheck while the government is shut down. Active duty military personnel also won't be paid. But generally speaking, most federal agencies are up and running, although many workers may be furloughed. Members of Congress will still be paid. Some members have requested to have their pay withheld until the shutdown is over.

During the 2013 government shutdown, only 17 percent of the government was actually shut down. Some Americans did see the shutdown because the Obama administration weaponized it. National parks, for example, were closed to the public. This time around, most national parks are open.

The House did its job. Senate is the real problem.