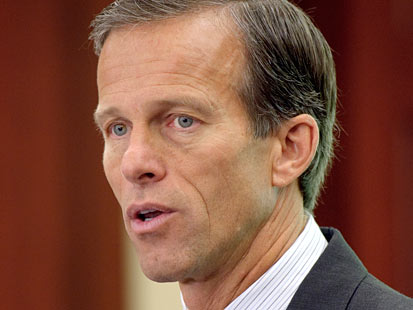 John Thune is leading the fight for a legislative stop to Net Neutrality regulations.

The problem with regulatory agencies is that the way they are structured in such as way as to minimize the importance of public pressure. Whereas Members of Congress have to worry about getting reelected, the modern regulatory czar is appointed by the president, and therefore has no concern other than to faithfully execute the will of the man who gave him his job.

This is a real danger for the country. The responsibility of making laws is constitutionally vested in Congress, but modern precedent has allowed appointed officials the ability to make de facto rules that function in pretty much the same way as legal statutes. All the public can really do is drive comments to the agency’s website and hope that someone pays attention. Sometimes, this works, as when FreedomWorks activists drove a record number of comments to the IRS in protest of proposed new rules that would effectively neuter political non-profit organizations. In other rare instances, the courts will rein in agencies that attempt to exceed their authority, as when an FCC rule on Net Neutrality was overturned earlier this year by a federal appeals court. Other times, we are not so lucky.

Yet, the public is not entirely helpless, as Congress still has the ability to trump regulations using legislative measures, if only they have the spine to use them. Fortunately, the newly emboldened majority in Congress seems, at least provisionally, to have grown such a spine. A number of Republican lawmakers are now talking openly about taking preemptive action to limit the FCC’s authority to implement Net Neutrality. At the behest of the president, the agency has indicated intentions to draft regulations early next year that would reclassify internet services providers as “common carriers” (read: utilities) under Title II of the Telecommunications Act, first drafted in 1934 and revised substantially in 1996.

It should come as no surprise that the details of a nearly 20-year-old law do not perfectly apply to an internet that was still in its infancy at the time, and has since become an indispensable part of worldwide commerce and communication the likes of which could have barely been imagined by legislators in the mid-90s. An update is in order, and Republicans, led by Sen. John Thune, Rep. Bob Goodlatte, and others want to take the opportunity to specifically protect the internet from government regulation.

This is good news for proponents of internet freedom. While the FCC can craft regulations interpreting or filling in gaps between existing laws, they cannot enact rules that directly contradict existing law. For example, the King v. Burwell lawsuit to be heard by the Supreme Court in March alleges that the IRS did just that in ignoring the literal text of the Affordable Care Act. If Republicans follow through on their intentions, a legislative fix could close the door on Net Neutrality for years to come.

The problem, of course, is that President Obama still has a veto pen, and has signaled a willingness - almost an eagerness - to use it. Assuming Republicans are unable to secure a veto-proof majority, the FCC could still find itself at liberty to adopt stricter controls on internet service providers next year. Nevertheless, a presidential veto would put Obama and his regulators firmly on the opposite side of the voters and the people they put in office this November, which is never a comfortable position to be in the run up to a major presidential election. In any case, early in 2015, the battle lines are going to be plainly drawn for the fight for internet freedom. We need to be ready.