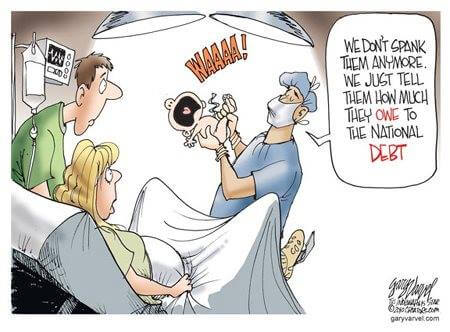 Lello, age 10; Hartley, age 8; and Emilia, age 5, have had a couple of bad weeks and they don’t know it! Obama, Boehner, McConnell, Pelosi, Reid and other pols - Republicans and Democrats – just added more money to our national debt. My grandchildren and millions of other children and grandchildren will be forced to pay this debt.

Long ago, Hans F. Sennholz, a great German/American economist, explained: A government debt is a government claim against personal income and private property – an unpaid tax bill. Hence, this is taxation without representation, which is very un-American. Correction...coercing debt upon our children and grandchildren has become politics as usual.

In his 2008 Presidential campaign, Mr. Obama said in Fargo, N.D. that Bush was hurting our children by increasing the debt.

“The problem is, is that the way Bush has done it over the last eight years is to take out a credit card from the Bank of China in the name of our children, driving up our national debt from $5 trillion dollars…added $4 trillion dollars by his lonesome, so that we now have over $9 trillion dollars of debt that we are going to have to pay back -- $30,000 for every man, woman and child,”

What is more depressing is that four years ago President Obama signed the Budget Control Act which limited Federal spending. He also pledged to veto any attempt to undermine our spending caps. Again, Mr. Obama, Republicans and Democrats just broke the Budget Control Act, and, dishonorably, America’s politicians cannot be trusted.

We the People must support a constitutional limit on spending in relation to our Gross Domestic Product. Poland has a debt limit, which imposes enforceable spending limits that begins when the debt is 50% of GDP. As a result, Poland’s economy is robust and continues to grow.

In America, many responsible organizations have proposals to limit our national debt. Probably the closest to becoming a reality is the Compact for America, which is having success in several states.

We the Adults cannot trust the pols – Democrats and Republicans. We must limit spending to a percentage of GDP.