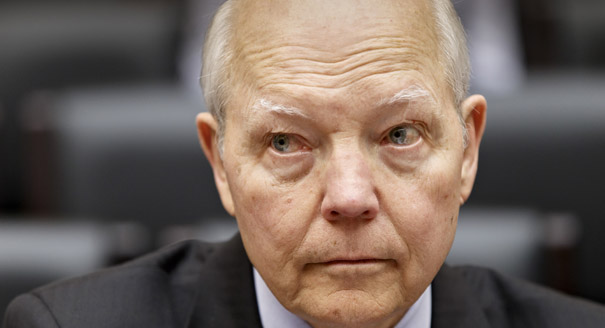 Hey hey, ho ho, Koskinen has got to go!

Modern Americans view impeachment with a sort of awe and reverence. To most, it seems like an inconceivably drastic thing to do. But it was not always this way, nor was it the intention of the founders. Impeachment has always been a practical tool for getting rid of bad actors in government and, given the amount of government corruption we see today, a tool that should be used with much greater frequency.

If there is any doubt that Koskinen is a worthy target for impeachment, let’s run down a few of his misdeeds since he assumed the office in 2013.

First, the IRS targeting scandal. In 2013, it emerged that the IRS had been targeting conservative non-profit groups, delaying their applications, demanding ridiculous amounts of paperwork including highly invasive personal questions, and general obstructing conservative grassroots activities. The American Enterprise Institute estimated that this depressed Republican voter turnout in the 2012 elections, and could have even made the difference between Barack Obama winning or losing.

Of course, this was all before Koskinen became commissioner, so what does it have to do with him? Koskinen assumed office in December 2013, during the ongoing investigation into the scandal. Any serious public servant would have done everything possible to clean up the agency and get to the bottom of the wrongdoing. Koskinen instead chose to obstruct. Koskinen responded to subpoenas for emails regarding the scandal with the unbelievable claim that all the emails from the specified time period had suddenly gone missing.

After Lois Lerner, the public face of the targeting scandal,resigned without facing criminal charges, Koskinen seemed to be content, feeling no need to investigate further or cooperate with independent investigations. Worse still, a recent GAO report has revealed that Koskinen failed to implement recommended reforms to keep this sort of thing from happening again.

This callous disregard for the civil liberties of American citizens, and a complete indifference to running a just and transparent agency are alone sufficient cause to call for Koskinen’s impeachment. But wait, there’s more!

Koskinen was also in office when the IRS dropped a proposed rule that would have all but destroyed the ability of non-profits to engage in political activity. Dropping the proposed rule on the day before Thanksgiving, to escape public scrutiny, the IRS wanted to require that all tax exempt groups engage in “social welfare,” an undefined term that meant whatever they wanted it to mean. You can bet it wouldn’t include advocating for lower taxes, less government, and more freedom, though.

This was an outrageous attempt to abridge the freedom of speech of all Americans who disagreed with the president’s agenda. Thankfully, the agency was forced to withdraw the rule after receiving a record number of angry comments.

All these actions reveal John Koskinen as an obstructive, partisan bureaucrat who has abused his office and failed in his responsibilities. He should be removed from office or, failing that, impeached.

Take action at the button below.

John Koskinen's endorsement of civil forfeiture is grounds for his removal. This perversion of RICO statutes is a direct violation of the 4th and 5th amendments. Over 200,000 citizens have had their property confiscated without ever being charged, much less convicted, of a crime. He needs to be removed.

If a person is guilty of robbery, embezzlement, counterfeiting, or swindling, he or she generally ends up in prison. On the other hand, if a party fails to make a promised payment or defaults on a contractual obligation in some way, the matter is usually handled with civil remedies.

To treat defaulting taxpayers as criminals while treating tax collectors who take what they aren't entitled to with a slap on the wrist at most, is not only a classic example of imprudent stupidity in dealing with the area of taxes, but it betrays the basic attitude of people in Washington. They would jail dishonest tax collectors as felons, and pursue delinquent taxpayers with civil penalties, if they truly believed the money belonged to the citizens until they authorized taxation for necessary government operations, rather than the reverse (all money belongs to the state and citizens are only allowed to keep any on sufferance of the government). That's how patriots like Joe Louis and Sgt. York can be impoverished and branded as criminals.

Impeach him, but Jail, Trial, Conviction and EXECUTION for Assbama, the EVIL ONE, the Muslim PUNK ASS NEGRO THUG BITCH. HANG HIM.

The fact that IRS Commissioner John Koskinen, Lois Lerner and the many others responsible for specifically targeting and violating the rights of American citizens are not in jail and all of their assets liquidated to compensate the individuals who were affected is beyond my compensation. These Progressive politicians think they are above the law. No one is above the law.

"Apologists for activist government never tire of telling us that the benevolent state is our protector and that without it we'd be at the mercy of monsters. It is about time that we understood that the U.S. government does more to endanger the American people than any imagined monsters around the world…by pursuing its Grand Foreign Policy of meddling anywhere and everywhere." Sheldon Richman

Proud Texan, God bless you and your families and may God continue to bless The United States of America the best hope for FREEDOM in this world.

"Life is a gift, FREEDOM is a responsibility"

This is but one of thousands or millions of reasons Congress should have begun proceedings to impeach Obama long ago. In fact, impeachment is miniscule in comparison to what he should be facing for the many crimes he has committed against America and the American people. This is simply one example of how corrupt our government under Barack Obama is and has been now for almost seven years. It is corrupt from the ground up and the only way you can tell who the decent, honest, ethical, courageous and patriotic Americans in government are.....look to those who are being targeted and maligned on a daily basis. Those are the Patriots that are fighting for our country....The Good Guys. There are just a few of them but being from the State of Texas, I will remind you that less than 200 Texians and Tejanos held off the Mexican Army of General Santa Ana which numbered over 5000 for 13 days in 1836 before they all perished for the cause of Texas Freedom. There were men from several other states who joined us in the effort, including the most famous, Davy Crockett, a legislator from Tennessee. Five days later, The Texas Army, under General Sam Houston surprised and defeated Santa Ana at the Battle of San Jacinto and the casualties on the Mexican side were said to be anywhere from 1500 to 5000 in both battles. General Houston had an army of about 800. Shortly after the Battle of San Jacinto in 1836, Texans declared Texas a Republic and in 1845 the United States annexed Texas as the 28th State in the Union. The odds are in favor of the Patriots of this country to take our country back and return it to the position we once held.....a long journey ahead of us. Obama needed to be impeached before he ever did the damage he has done to us and this nation. It's time to remove this crook and make him #1 on the long list to follow and Obama needs to be impeached if he fails to remove this man. He is obviously no better than his predecessor but then it is not expected that Obama would appoint any other than what he himself is.

I'm afraid such unreasoned calls for impeachment like this has been a major factor in Obama continuing to stay in office and continue to wreak havoc. Logan Albright finally grasped the direction that Congress needs to move in to bring the lawlessness and tyranny to an end.

Obama is helpless without his henchmen and minions to do his bidding. Impeachment was devised by the British in the first place as a means of an unhappy electorate to fire a warning shot across the king's bow by impeaching his ministers. If my advice on this (https://disqus.com/home/discussion/washtimes/judge_threatens_to_hold_oba...) on this had been heeded years ago, Obama likely would be on the verge of being on his way to prison for his many crimes. If the few honest people in Congress had continually introduced impeachment resolutions against low-level bureaucrats on behalf of very sympathetic average Joes who were being tormented by them, it would start to sink in what it means for anyone to be totally at the mercy of folk appointed by Obama that would not be "other than what he himself is." LIke I've argued over and over, if the victims of Obama's lawlessness were cannily chosen, those doing the targeting and maligning (particularly the RINOs) would only expose their corruption to the nation at large, if the populace identified with the people being tyrannized. The only things I would take issue with Albright is that whether Koskinen is removed or not should be no factor at all on the institution of starting impeachment proceedings now, and Koskinen should be merely the first domino in his agency to fall, and the IRS should merely being the first in line for impeachments, to bring out in the full light of day all the tinpot Fuhrers Congressmen can find who have been illegally and outrageously abusing American citizens. That's the only way to effectively throw Obama/McConnell/media cabal on the defensive.

The IRS:  Obama’s Powerful Army of Punishment and FearBy: Jim Hoft and Andrea RyanEvery empire needs its army.  The Romans had their Legions.  Obama has his IRS.

Food for Thought- The Dangerous IRS

Perhaps the most hated agency in the entire United States government is the Internal Revenue Service, which was the child of the Sixteenth Amendment of the US Constitution. As of 2008, there were 101,054 people with the agency along with over 1.2 million accountants, lawyers, and preparers in the private sector.  Here at FreedomWorks, we argue that high taxation is harmful for a variety of reasons.