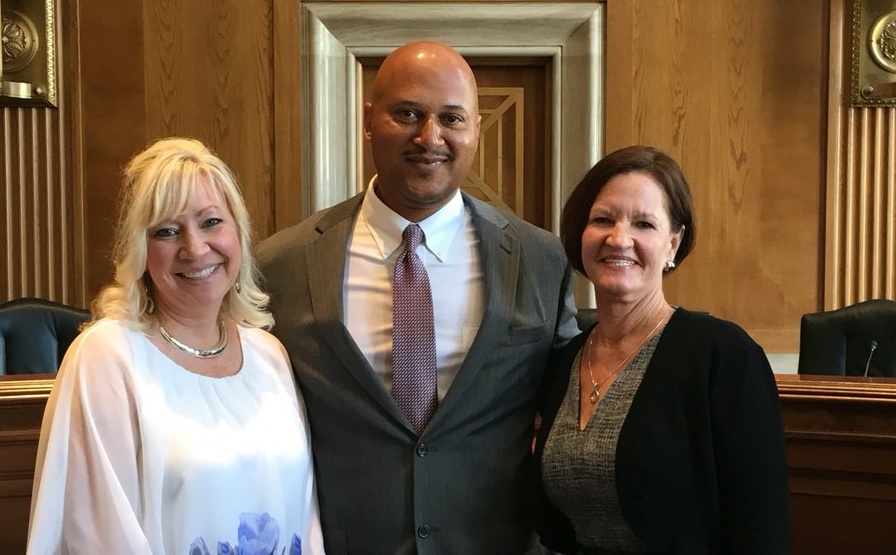 Ms. Campbell sold some methamphetamine and spent 16 years in prison for the crime. She has four daughters, is a grandmother, and “has been drug-free for more than 20 years.” Ms. Thompson was not an offender, but she was a cousin of one and spoke on her cousin’s behalf. Ms. Thompson “maintained a deep relationship with [her cousin], Mandy, during her incarceration.”

The third speaker, Sherman Chester had a significantly impactful story, and he was able to tell it in such a sincere way. He described his life coming out of prison, as did the other panelists, and he even learned how to be an electrician while in prison. He received a “mandatory life without parole sentence for cocaine and heroin offenses,” and the judge in this case stated that “this man doesn’t deserve a life sentence, and there is no way that I can legally keep from giving it to him.” He talked about how drug sentencing laws have impacted his life and his testimony, as well as the testimonies of the other panelists, showed how these laws have impacted the lives of so many people in this country.

During the second half of the lecture, the panelists were asked about possible solutions to be implemented. They heavily criticized the mandatory minimum laws saying that thousands of others in society have been incarcerated by such laws. Mr. Chester even stated “there’s been a lot of money that’s been wasted on mandatory laws.” He is right. The saddest part about this is that this practice is makes use of tax-payer money - money taken from the taxpayer to lock up people for drug offenses; not murder, not rape, not assault, but drug offenses. With a debt of $19 trillion, we cannot afford to keep spending on programs that are effectively doing more harm than good.

Ms. Campbell stated that “something has to be changed within the laws,” which was in response to being asked about whether or not changing laws would be necessary since the president can grant clemency to those convicted of drug crimes. In Ron Paul’s book Liberty Defined, Dr. Paul gives Franklin Delano Roosevelt credit where credit is due in regards to President Roosevelt repealing prohibition. The same principle can be applied here. President Obama has in fact helped some individuals impacted by the criminal justice system. In July 2015, President Obama became the first sitting president to visit a correctional institute and talk to actual prisoners. He commuted Mr. Chester’s sentence and the sentences of other drug offenders.

These mandatory minimum laws must be repealed. They are unjust and unfair and they lead to the detriment of so many young lives. Some examples of the changes within the laws that Ms. Campbell suggested are time cuts and shorter but appropriate sentences. She went to say that society “[should] not put people in prison for decades because it not only ruins their lives, [but also] their children and their families and their grandchildren. It’s just such a huge waste of time”. In regards to young people, Mr. Chester stated that, “Some ages 18-25-... Locking them up 10, 15 years of life is not going to help them. It’s going to hinder the situation. It’s gonna make it worse - especially if this guy has kids.”

Mandatory sentencing laws have a serious impact on the people who have been affected by them as well as their families. This lecture showed that those convicted of non-violent drug crimes should benefit from evidence based-reform programs. They should not be treated the same way that society deals with murderers and rapists. These sentences even keep judges from giving just punishments as the judges cannot hand a punishment deviating from the “minimum”. A society cannot truly call itself free with laws such as these.