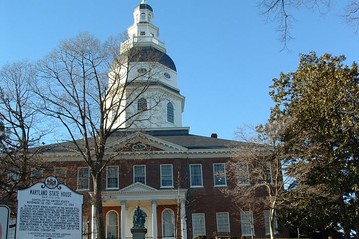 Maryland is one of several states working to reform civil asset forfeiture.

Maryland is just one of several states already taking up forfeiture reform. This week, the state Senate will vote to override the governor’s veto of a civil asset forfeiture bill passed last year. This bill was somewhat modest in its scope, but still an important step forward. It would shift the burden of proof from the property owner onto the government, who would have to provide “clear and convincing” evidence that property was used in a crime before being able to seize it.

Since legislators of both parties believe they have the votes to override the governor’s veto, this year they intend to press their advantage, introducing new legislation Friday that goes even further. The new bill requires a criminal conviction before assets can be seized, essentially replacing civil forfeiture with the less controversial criminal forfeiture.

The new bill also increases accountability on what happens to the funds seized. Traditionally, law enforcement is able to keep most or all of this money and use it for departmental expenses. It’s clear that this creates a perverse incentive where police are effectively able to profit off property seizures. New reporting requirements would make the process more transparent, thereby making abuse more difficult.

The Maryland State’s Sheriffs’ Association and Maryland Attorneys’ Association oppose civil asset forfeiture reform, claiming that police need all available tools to go after drug dealers and other criminals. But the constitutional guarantee of due process applies to all Americans, and you can’t just circumvent it because it’s convenient or makes your job easier. We have to resist the temptation to surrender our freedoms for sake of security.

The sheriffs and attorneys would have you believe that civil forfeiture only happens to bad people who have broken the law, but without a high burden of proof on the government, there’s no way of knowing that. In fact, forfeiture could happen to any one of us, leaving us with little recourse to retrieve our stolen property.

It’s gratifying to see states like Maryland acting so aggressively to reform this unjust process, and evident that some of the hard work groups on both sides of the aisle have been doing to highlight this problem has been paying off.