With President Obama's umpteenth (twentieth, if you're counting) pivot back to jobs and the economy, there has been a lot of trotting out of the concept that meaninful economic recovery must begin with the "middle class". Politicians, economists, and pundits alike have all revived the meme, but almost none are directly addressing that fact the "middle class" has reached the mythical status of unicorns or free health care for all.

By current economic definitions, it would seem that "middle class" means nothing more than being employed while drowning in debt.  The facts about today's US economy are grim. Income has been stagnant for a generation, the average American family owes more in student loan, and mortgage debt than before the recession, and the masters of our money know that there is no meaningful recovery as of yet.  Those economic realities all but define the death of the traditional "middle class" family, and make a traditional recovery very unlikely.  These, along with remakably invasive new banking and lending regulations facing scrutiny and implentation difficulties, have been the Fed's incentive for unprecedented intervention for the last few years. 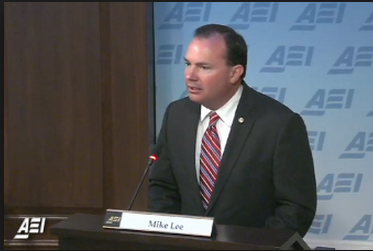 Senator Mike Lee recently revealed his plan to lessen the tax burden on families, hoping to free them from some of the financial burdens that have continued to mount during the recession.

Quoting both James Madison and Abraham Lincoln on the object and role of government,  Senator Lee plainly speaks to the advantages granted to big business by government today, the effects of cronyism on competition and entrepreneurs, and the crisis of opportunity facing Americans.  It is refreshing to see someone in Congress offer a solution, and one that simplifies, for a change.

The details of the Senator's reform plan will be revealed soon, but he has so far outlined a three-tiered tax rate system for individual income, reforms to charity and mortgage deductions, and additional tax credits for parents. Even more anticipated than his tax reform proposal, are Lee's intentions to address welfare reform, corporate taxes, and additonal reforms to benefit those who fall into the historical definition of "middle class".

Without doubt, the Senator's proposals will be met with opposition, but it would be irresponsible to ignore the impact of our tax code on everything from consumer confidence to the marked lack of business expansion during the ongoing recession. Amid calls from TEA Party conservatives for less spending, and Progressive calls for more assistance to the low income brackets of our economy, Senator Lee has been the only member of Congress to seriously address the obvious lack of opportunity, and the GOP's lack of leadership in what has traditionally been a large plank in their platform: economic opportunty as an alternative to government assistance.

Can tax reform ressurect a prosperity-creating, and upwardly mobile mythical middle class? Not until someone proposes and pursues bold reforms as more than a campaign talking point.  Thank you, Senator Lee.