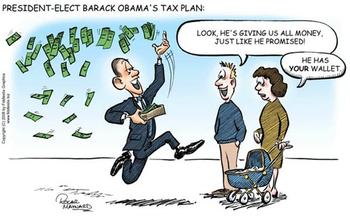 With another year comes another federal budget season, kicked off by President Obama’s budget proposal. Although his plan was shockingly delivered by the date required by law (for only the second time under Obama), perhaps the president and his team should have taken a few extra days to think it through. The proposal they released today is so shockingly tone-deaf and immune to fiscal realities that it would be comic if we weren’t talking about the actual future solvency of the United States government.

To start with, the base spending numbers under Obama’s budget once again blow past the spending caps signed into law by President Obama under the Budget Control Act of 2011. The White House plan calls for nearly $4 trillion in spending next year ($3.999 trillion, but who’s counting?). Of course, a spending plan this bloated requires revenue in the form of a massive, $2.1 trillion tax hike over ten years.

While the White House insists that this tax-and spend scheme somehow shrinks the deficits, their own numbers show the deficits beginning to increase again by 2018 and never looking back. In spite of an electoral stomping in 2014 that clearly showed the public anger at Obama’s big government policies, the president has yet again proposed a budget that literally never balances. These perpetual deficits would leave our future selves with a gross federal debt of $26 trillion just ten years from now.

And what is all this new revenue and spending going towards? A bevy of brand new spending programs, of course. It contains everything from free community college, to subsidized universal pre-school, to a new stimulus program for infrastructure that brings up stimulus flashbacks (shovel-ready jobs, anyone?). Even assuming that the federal government ought to have a role in these programs at all, how are we supposed to pay for them?

Obviously, the president doesn’t care. His vision as laid out in this latest plan is an ever-increasing government where the solution to every ill is to create another government program, funded by more taxes. Fortunately, this budget plan is dead on arrival in Congress, where each year even Democrats have been unwilling to vote for Obama’s increasingly unrealistic proposals.