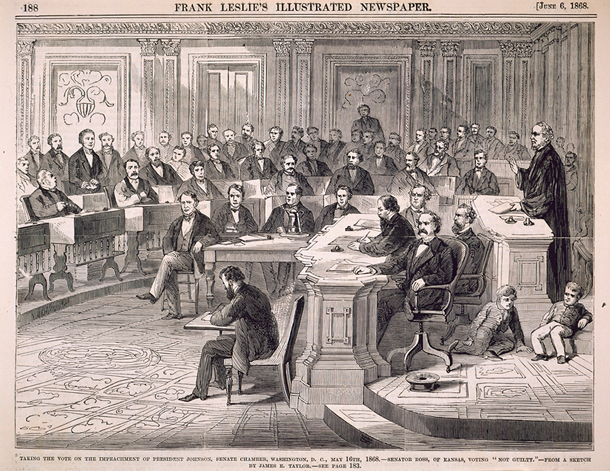 With the recent switch from “quid pro quo” to “bribery,” the Democrats are attempting to make their - so far insufficient - evidence fit the words of the Constitution. Of course, what appalls Piereson and Dershowitz and should greatly concern every American is that the process is blatantly a partisan attempt to remove a president that the Democrats intensely dislike. Impeachment was never intended to remove a president for irritability. In essence, the Democrats are attempting to remove a president they dislike, similar to a vote of no confidence in a parliamentary system. The Framers particularly rejected a parliamentary system, because they did not want the president to be subservient to Congress. Our Constitution is all about power checking power.

In addition to violating the intent and purpose of impeachment, Piereson recognizes serious problems that will adversely impact governance in America. The highly partisan congressional conflicts and uncivil attacks have hurt or destroyed many important governing norms and purposes.

Piereson begins with the future appointments to federal courts. “First: It now appears that a president will never again be able to appoint a justice to the Supreme Court or judges to lower level federal courts, unless he or she has a partisan majority in the Senate. That is a new development, brought into being by no-holds-barred campaigns against Robert Bork, Clarence Thomas, Brett Kavanaugh, and many nominees for judgeships on lower federal courts.”

Gone are the times when Scalia and Ginsberg – with highly different interpretations of the Constitution - were selected by nearly unanimous votes.

Also, Piereson expects difficulty in confirming cabinet members. “Second, it further appears that a president cannot even confirm a cabinet unless he or she has a partisan majority in the Senate. Democrats established this precedent by voting in unison against President Trump’s cabinet nominees, with the exception of Secretary of Defense Mattis, who won a near-unanimous vote. Democrats in the Senate voted almost unanimously against Jeff Sessions (Attorney General), Mike Pompeo (Director of Central Intelligence), Rex Tillerson (Secretary of State), Betsy DeVos (Education), Steven Mnuchin (Treasury), Mike Mulvaney (Office of Management and Budget), and Scott Pruitt (Environmental Protection Agency).”

Recently, Attorney General Barr in a speech to the Federalist Society states that President Trump’s appointments to other important federal posts have been harmfully delayed. “As of September of this year, the Senate had been forced to invoke cloture on 236 Trump nominees — each of those representing its own massive consumption of legislative time meant only to delay an inevitable confirmation. How many times was cloture invoked on nominees during President Obama’s first term? 17 times. The Second President Bush’s first term? Four times. It is reasonable to wonder whether a future President will actually be able to form a functioning administration if his or her party does not hold the Senate.”

Piereson fears that excessive federal spending and debt (which everyone should know is dangerously rising) will continue because of the congressional internecine hostilities. “Third, it also appears that there is no longer any realistic way to curb government spending without risking a government shutdown, which neither party wishes to face, especially Republicans, who have been routinely blamed for shutdowns by Democrats and the mainstream media. It may be possible to constrain federal spending with a unified government, but that would require sixty votes in the Senate, which neither party is likely to win anytime soon. Thus, as a consequence of party warfare, the spending will continue, the debt and deficits will accumulate, until there is a crisis of some kind involving inflation, interest rates, the depreciation of the dollar,…”

Candidly, if there were grounds for impeachment it would be against Congress for having abdicated their constitutional and legal duties to pass budgets and utilize “the power of the purse.”

Extremely alarming, Piereson foresees a very difficult future for our unique Republic. “The U.S. political system is heading at breakneck speed toward some kind of crisis in which partisan warfare overwhelms the capacity of the president and congress to address national problems, as they once used to do in an era of greater national consensus.”

These are very dangerous times for our Constitution, freedom and safety. It is time to call off this impeachment sham. Time for Congress to pass budgets and reduce the federal debt. Time to reduce the power of the federal government and to restore local communities and the American family.

A Primer on the Presidential Impeachment Trial in the Senate