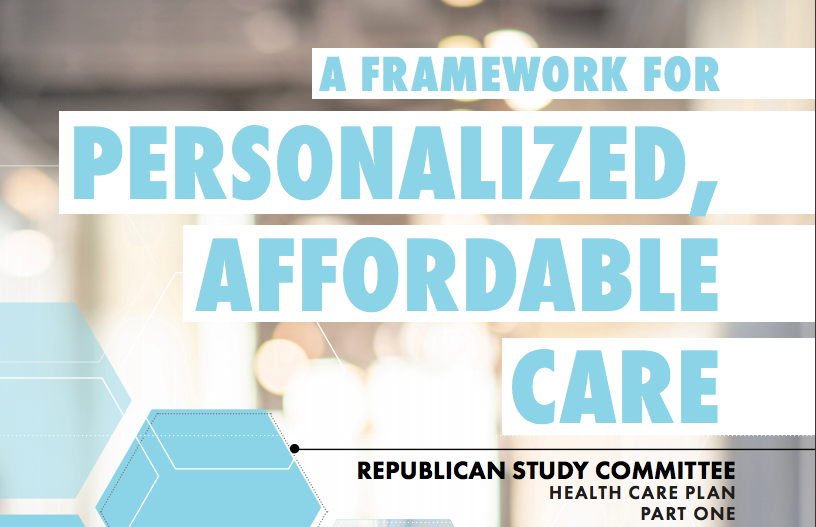 The United States is at a crossroads on healthcare. The so-called “Affordable Care Act” (ACA), also known as “Obamacare,” has driven up health insurance premiums and reduced the quality of health care through narrow provider networks. Many congressional Democrats and Democratic presidential candidates have gotten behind a costly single-payer health care proposal like Medicare for All that would result in the virtual elimination of private health insurance.

A Framework for Personalized, Affordable Care moves away from the one-size-fits-all approach taken by the ACA to make health insurance more individualized by giving patients more options for coverage, reconnecting patients with their doctors, and ensuring that the most vulnerable among us have access to high-quality coverage.

The core of the RSC’s plan is freedom of choice, by greatly expanding health savings accounts (HSAs). The limit on annual contributions to an HSA would be greatly increased, to $9,000 for an individual and $18,000 for a family. Employers, too, would be able to deposit up to these amounts tax-free into an HSA their employees own. This effectively puts individuals back on an equal playing field as employers in the purchasing of health insurance. Unlike employer-sponsored group plans, and other employer-dependent arrangements like Flex Spending Accounts (FSAs) and health reimbursement arrangements (HRAs), the money that is placed into an HSA is fully owned by the recipient, eliminating the problem of “job lock,” where employees fear changing jobs because of their health benefits.

Beyond purchasing an ordinary insurance plan, HSA enrollees would also be allowed to spend their tax-free funds on a far wider variety of health care services than was previously the case. This includes alternatives to standard insurance, such as health sharing ministries, direct primary care, short-term limited-duration plans, and health status insurance. People on existing single-payer government health care assistance, such as Medicare, Tricare, veterans’ assistance, or the Indian Health Services, would also be able to contribute tax-free to health savings accounts to supplement the often-inadequate care they receive from those programs.

Several of the positive changes the Trump Administration has made in health care via regulation would be codified as law. This includes the ability of small businesses and trade associations to group together and form Association Health Plans or faith-based Health Sharing Ministries and extending the maximum length of short-term, limited-duration insurance plans.

In all, these changes would vastly expand the range of options Americans have to choose from in how best to obtain quality, affordable health care. Giving people more control over how their health care dollars are spent should also unlock further innovation, something which has been increasingly lacking as more and more of the population has been locked into narrow, government-defined avenues of obtaining health coverage and care.

The Hole in the Market: Covering Pre-Existing Conditions

Obamacare was in truth an attempt to systematically consolidate health care delivery options so that they could be more easily controlled and subsidized via government. The way it was sold, however, was that it would provide for those who struggle most to afford their care - people with chronic, expensive-to-treat health conditions.

Real health insurance is supposed to be a safety net for people so that a sudden, high-cost health issue doesn’t cause them financial ruin. People who have chronic, high-cost health conditions upset this model because the cost of their care over time is magnitudes higher than that of a typical, relatively healthy member of their insurance pool. Obamacare’s approach to solving this problem was to force everyone into the same category of insurance while capping how much any one person could be charged in premiums, meaning that nearly everyone’s health care costs went up massively.

In order to make sure people with pre-existing, high-cost conditions have access to the same quality of care without also inflating the cost of health care for the vast majority, the RSC’s plan would federally fund states which create their own “Guaranteed Coverage Pools.”

The RSC plan addresses pre-existing conditions in a unique and thoughtful way. It does this by expanding the continuous coverage protections in the Health Insurance Portability and Accountability Act (HIPAA). A person who received coverage through his or her employer could change jobs and switch to the individual market or switch plans on the individual market would not be denied coverage based on a pre-existing condition or health status. Of course, a person would have to maintain continuous coverage for 12 months, although there is a 63-day grace period.

Now, Maine only provides an example of an innovative approach that a state could take. Other states could emulate Maine’s experiment or it could try another approach such as a traditional high-risk pool.

Restoring Medicaid to Its Original Purpose

One of the main ways that Obamacare reduced the number of uninsured Americans was by massively expanding Medicaid, with 14.7 million new enrollments since 2013, a 26 percent increase. A large portion of these were able-bodied adults, not the target recipients for Medicaid originally, and the influx of new enrollees has strained an already poorly functioning program.

Medicaid reimbursement rates are so low that many doctors won’t even take new Medicaid patients, and the fact that there is no cost-sharing by patients encourages overuse. The result is massive waiting lists and a generally poor quality of care for many Medicaid recipients.

As a way to entice the states to expand their Medicaid programs, the federal government also agreed to initially bear 100 percent of the cost of care for enrollees under the expansion for a period of time, and at a greatly higher rate than ordinary Medicaid enrollees indefinitely. This has resulted in a massive expansion of the federal cost of Medicaid, to over $389 billion as of FY 2018, in addition to the program looming as an albatross weighing down state budgets. 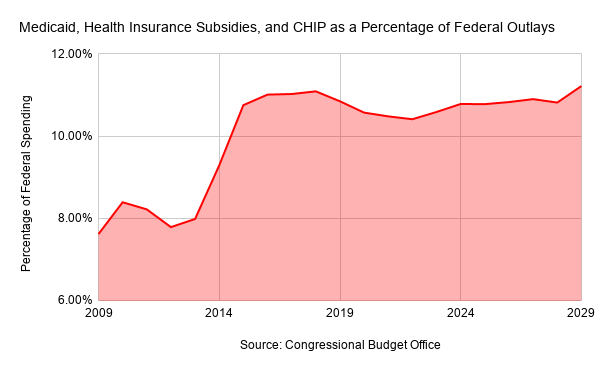 The RSC plan proposes to restructure Medicaid by distributing its funding to the states in two different grants - one to provide care for original, base Medicaid recipients, and another more flexible amount to be used to support low-income access to health care as states see best. Half of the latter, “flex” grants would have to be used to support premium costs for low-income consumers, which could help able-bodied, dependentless adults (who originally never would have been eligible for Medicaid anyway) afford the transition from Medicaid back to the private insurance market. This transition will be further incentivized by the fact that the inflated federal matching rate for ACA Medicaid expansion patients will be reduced to the standard Medicaid level over time.

How these block grants are administered (which is not specified in the RSC memo) is very crucial to their outcomes - a grant that is overly entangled in top-down Federal restrictions would be little better than existing Medicaid. When granted the latitude to customize their Medicaid programs, as was allowed via waivers during the Bush administration, states such as Indiana and Florida have proven able to greatly improve health care outcomes for Medicaid patients without increasing spending. The spirit of the RSC’s proposal trends in the direction of maximizing states’ ability to serve their own populations well, and hopefully the eventual legislative text would reflect that.

Overall, the RSC’s plan to reform health coverage is among the boldest major proposals of its kind we’ve seen introduced since the implementation of ObamaCare. It does leave some pieces of Title I of ObamaCare in place that we’d rather see repealed (the under-26 mandate, for one), and the devil would be in the details in terms of how the Guaranteed Coverage Pool funding and Medicaid grants to the states are administered. Overall, however, the way the plan expands individual choice and control over health coverage would be an enormous improvement in our nation’s health care system that addresses fundamental problems well predating the existence of ObamaCare.