It has been 1,126 days since the Democrat-led Senate passed a budget. Despite this embarrassing dereliction of duty, on May 16th Senate Democrats forced votes on four budget proposals authored by Republicans. The Republicans countered by forcing a vote on President Obama’s unfeasible plan that would drastically raise government spending and taxes (it was defeated unanimously). Democrats voted against every single Republican budget, despite having failed to offer one of their own.

Prior to the vote, FreedomWorks issued a Key Vote notice  in favor of separate budget plans offered by tea-party-aligned Senators Pat Toomey (PA), Mike Lee (UT), and Rand Paul (KY).  Although Senator Paul's budget is the most effective proposal for solving our country's spending crisis, all three offer bold solutions and would be a dramatic improvement on the current unsustainable spending.

In order to help our grassroots members hold Senate Republicans accountable to their promises, we’ve created this chart to show which Senators are most firmly dedicated to solving our country’s economic crisis. 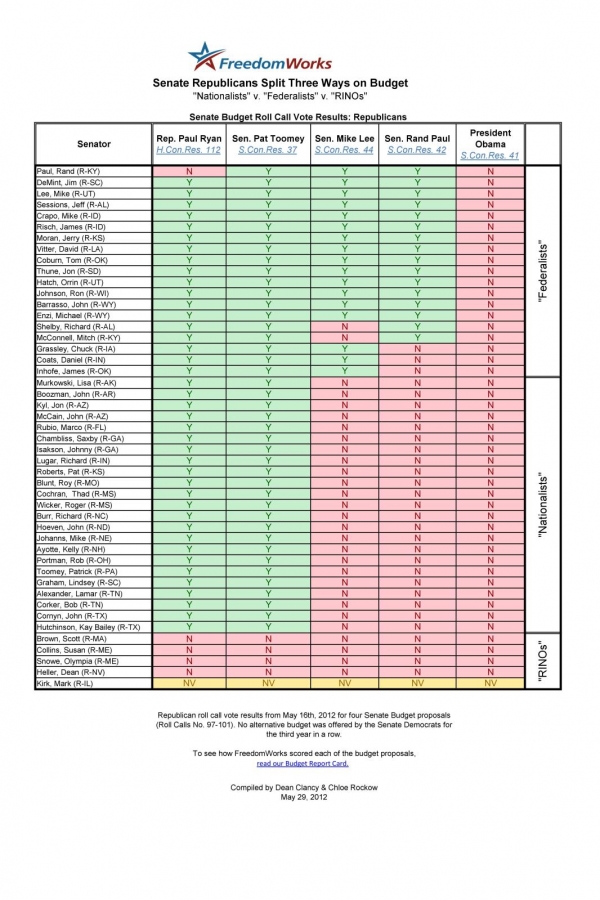 Notice how the voting breaks down:

The above two groups we describe as “federalists.”

This group we describe as “nationalists."

This last group, we dub “RINOs.” Like the Senate Democrats, they earn a dishonorable mention.

For more information on these budget plans, see our handy Budget Report Card.

To label the Republican voting blocks as "Federalists", Nationalists" or "RINOs" is meaningless. Everyone of those U.S. Senators voted in support of a monetary system based on the theories of Keynes and Friedman. Their theories put a government central bank in charge of creating a currency based on monetizing government deficits.

Central bank currency has negative value. It simply is not viable in the long run. We have come to the end of the reign of irredeemable currency systems. Voting to reduce debt will not change a thing for the irredeemable Federal Reserve bank currencyat this point in time.

Only a return to the currency system based on the Real Bills Doctrine by Adam Smith and employed by George Clymer and Benjamin Franklin with The Philadelphia Bank, a system which was continued in the United States as a redeemable currency system until 1933, can we get us out of the monetary mess.

Congress should stop the talk about reducing spending. Instead, Congress should remove the "legal tender" protection from the Federal Reserve Note by removing the provision from the 1982 Coinage Act. It will give rise to a parallel redeemable currency system competing with the FRN.

A redeemable world currency system is going to return shortly. The question is whether China and Japan will lead it, or whether the USA can return to lead the world under a redeemable currency regime.

Forget the talk about deficit spending. Trying to count on productivty to pay off the debt is entirely unrealistic. It's much too late for that.