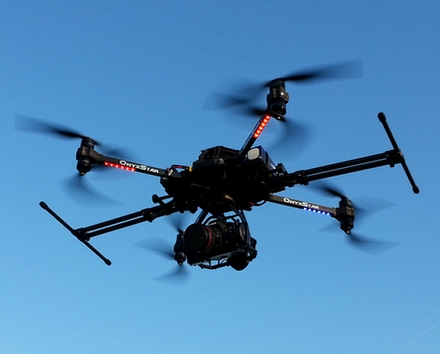 Drones have promising possibility if used appropriately; however, there are significant concerns regarding safety and privacy. Possible commercial uses of drones include faster shipping, efficient inspection of infrastructure, and searching for missing persons. While such potential is exciting, enthusiasm is mediated by risks of privacy violations if law enforcement starts using drones for surveillance or if private drones begin whizzing through backyards.

Representative Thomas Massie (R-KY) voiced his concern for the privacy of American citizens, a concern that FreedomWorks deeply shares. Massie brought up the uncertainty of property rights as they apply to the sky. Do we own the space above our yards? To what height can we claim ownership? Most would probably agree that a drone hovering a foot off the ground would be a problem, but what about beyond the height of our homes? We do not have laws for these issues because they have never before been argued in court; we will have to wait to find out how far our right to privacy extends when these questions are explored in the common law system. No doubt, waiting for people’s privacy to be invaded in order to determine the legality of these questions is a risk.

Further concern is garnered for engineering obstacles inherent in Unmanned Aerial Vehicles (UAS, or drones); they must be integrated into an already complex airspace system, they must be able to detect and avoid other objects, and people on the ground must be able to communicate with them in route.

However, hurdles should not hinder progress. The engineers designing ever-evolving drone technology are smart and good at their jobs. Looking back at the incredible technological advances made in the past decade, there is no reason to question the very achievable, safe reality of common drone use. Done right, with protections in place for the privacy of individuals, drones will be great. The inability for government officials to understand the science behind new technology is not a reason to prevent companies from testing drones.

Unfortunately, that is exactly what is happening. Chairman Chaffetz opened the hearing by celebrating America’s historic leadership and creativity, and expressing his frustration at the currently bogged-down system which is hindering progress.

The Federal Aviation Administration (FAA) has been very slow responding to developments in drone technology and integrating drones into the National Airspace System. Amazon and Google have been unable to test their drone in the United States, and thus have begun to test drone package delivery overseas. Amazon started testing in Canada and the United Kingdom after waiting for months to get approval in the United States. That’s right… Canada and the United Kingdom have fewer regulations on this new technology than we do.

The Vice President for Global Public Policy at Amazon, Paul Misener, expressed his frustration at the FAA during his testimony at the hearing. According to Misener, “categorical prohibitions, for example no nighttime operations or no operations beyond line of sight, make no sense.”

Regulations defined by government agencies should “take advantage of a core capability of UAS technology: to fly with minimal human involvement, beyond the visual line of sight of a human operator.”

The government should make sure that proliferation of drone use does not infringe on individual liberty and privacy, but then officials need to back down and let innovation take off. No more meddling or over-regulating invention just because government bureaucrats are uncomfortable and unfamiliar with new terrain (or horizons).