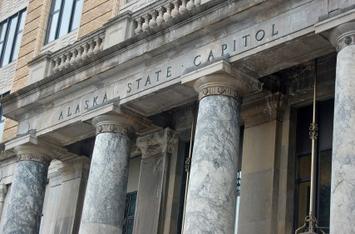 A civil asset forfeiture reform bill currently working its way through the Alaska House of Representatives has gotten a boost from the state chapter of the National Federation of Independent Business. The organization, which promotes small businesses, see the threat posed by business owners through Alaska's terrible civil asset forfeiture laws.

According to a recent report from the Institute for Justice, state and local law enforcement in Alaska can seize property based on probable cause and, in a perversion of justice, property owners in Alaska must prove by a preponderance of the evidence that their property is not connected to a crime to get it back.

Under Alaska's current forfeiture laws, the property owner does not have to be charged with or convicted of a crime. This standard throws the presumption of innocence, a core principle of the American legal system, out of the window. Law enforcement can also keep up to 75 percent of the proceeds from forfeitures, providing them with an incentive to seize property.

Introduced by state Rep. Tammie Wilson (R-North Pole), HB 317 would eliminate civil asset forfeiture and require the government to secure a criminal conviction -- or proof beyond a reasonable doubt -- before property connected to an illicit activity can be forfeited to the state. The bill would restore the due process rights guaranteed under Article I of the Alaska Constitution and Fifth Amendment to the United States Constitution. It would also serve as a crucial private property rights protection from this form government overreach.

Writing in the Fairbanks-based Daily News-Miner, Mike Miller, northern region vice chair of the Alaska chapter of the National Federation of Independent Business, explained why the reforms in HB 317 are so important for small businesses. "As the state deals with a historic budget shortfall and the prospect of significant belt-tightening across state and local agencies and departments, leaving these laws on the books is a recipe for disaster," Miller wrote. "Rep. Wilson’s proposed legislation contains provisions that will allow law enforcement the ability to pursue criminal activity while providing safeguards for individuals and a process for recovering seized property that should not have been seized."

The right to private property is the cornerstone of free enterprise. Alaska lawmakers should seek to protect all of their constituents, including small business owners, from any threat their constitutionally protected liberties. HB 317 is still awaiting action in the Alaska House of Representatives. Though there is no crossover deadline, time is, unfortunately, running out for the bill to move, as the legislature is expected to adjourn for the year in mid-April.