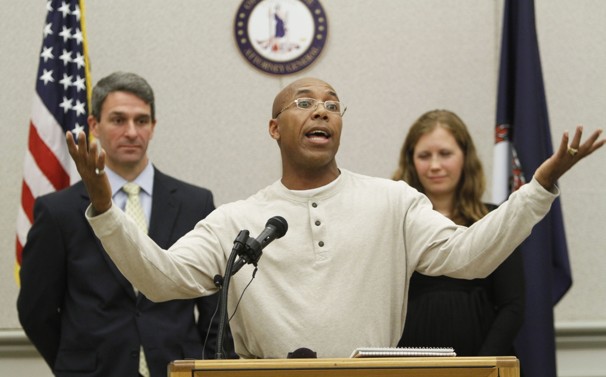 The criminal justice system is not perfect. Mistakes can be made during trials that sometimes result in innocent people being sent to prison. Advancements in forensic science have made it possible to right some of these wrongs. Thomas Haynesworth, for example, served 27 years in prison for a rape he did not commit.

The Innocence Project and then-Virginia Attorney General Ken Cuccinelli fought to help win Haynesworth's freedom after DNA evidence concluded that another person, Leon Davis, was responsible for the crime. Haynesworth was released in 2011, and the Commonwealth of Virginia subsequently paid him more than $1 million in restitution.

The Wrongful Convictions Tax Relief Act continues to right these injustices by exempting those wrongfully incarcerated from owing any taxes on awards for damages or restitution. It law also is retroactive, requiring the Internal Revenue Service to return taxes paid on awards and restitution. At a press conference on Wednesday, Johnson recounted his seven years as a prisoner of war in Vietnam to relate those who have been wrongfully incarcerated.

“When I learned that folks who had been wrongfully imprisoned were suffering the additional injustice of having to pay the IRS taxes on their restitution, I wanted to do something about it. What’s so great about the Wrongful Convictions Tax Relief Act is that it is also retroactive – which is a pretty rare thing in the tax world," Johnson said. "But that’s where today’s event comes into play."

Joined by Rep. John Larson (D-Conn.), Johnson sent a letter to IRS Commission John Koskinen urging the tax agency implement the Wrongful Convictions Tax Relief Act as quickly as possible. Retroactive payments are available for only one year, which is why Johnson and Larson are pressing the IRS for quick action.

"You see, folks only have until December of this year to get their money back from the IRS. That’s why we MUST hold the IRS’s feet to the fire," Johnson explained. "Our letter to the Commissioner today seeks details about how this agency is going to go about implementing this law. We are also asking for details about the Commissioner’s plans to make sure that wrongfully convicted individuals are aware of the deadline for retroactive relief as soon as possible. His deadline is February 1st, and you can rest assured I’ll be holding him to it.”

The Wrongful Convictions Tax Relief Act will not give innocent people the years of their lives that were taken away. But the bill does continue to help make things right by providing those wrongfully incarcerated with the chance to keep the money intended to make them whole and move on with their lives.