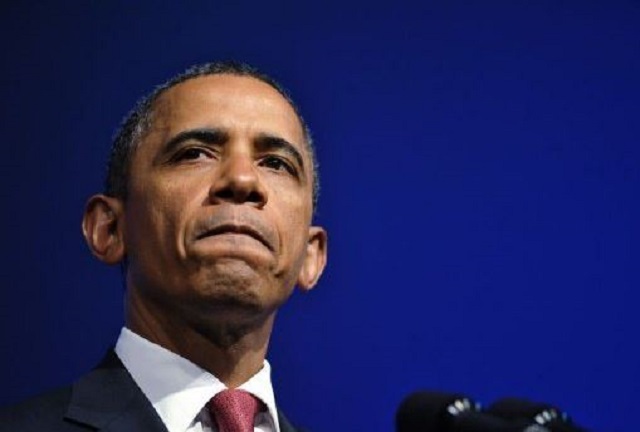 A headline at Organizing For Action proclaims - By 2014, The Health Care Law Will Help Nearly All Uninsured Americans Get Coverage. During remarks in the Rose Garden last year, President Obama lauded a study that indicated "through new options created by the Affordable Care Act, nearly 6 in 10 uninsured Americans will find that they can get covered." So it stands to reason that tracking the uninsured who have been helped by ObamaCare would be an important task, especially for Democrats who supported the legislation.

Not so, according to Gary Cohen, Director at the Centers for Medicare & Medicaid Services (CMS), administration official, and proponent of the ACA.

A health care reporter for the National Journal tweeted this message yesterday:

CMS' Cohen, asked how many uninsured signing up for ACA: “That's not a data point we are really collecting in any sort of systematic way”

The entire point of passing Obamacare was to alleviate the problem of 'folks' without insurance. So is the administration to be believed when they say they're not tracking this particular data point, or are they simply trying to sweep the results under the rug?

The Washington Post almost immediately provided the answer, running an article explaining that two separate surveys show what the White House and Democrats don't want the public to know - health insurance marketplaces are simply not signing up the uninsured.

The new health insurance marketplaces appear to be making little headway in signing up Americans who lack insurance, the Affordable Care Act’s central goal, according to a pair of new surveys.

Only one in 10 uninsured people who qualify for private plans through the new marketplaces enrolled as of last month, one of the surveys shows. The other found that about half of uninsured adults have looked for information on the online exchanges or planned to look.

One of those surveys by the McKinsey Center for U.S. Health System Reform shows that nearly half of the previously uninsured have not paid their premiums and thus have not purchased insurance.

Another chart indicates why a majority of the uninsured did not commit to purchasing a plan - affordability. 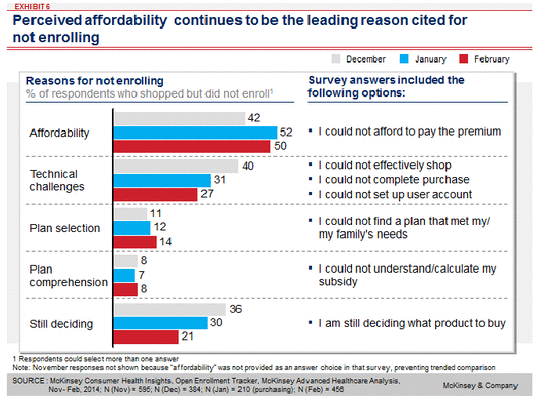 Let that sink in for a minute. A health care policy that has the word "affordable" in the title, has been deemed unaffordable by a vast majority of those who remain uninsured. Not technical glitches, not indecision, and not lack of information. Affordability.

American Commitment's Phil Kerpen explains that as bad as these numbers seem, they're actually much worse.

Bob Laszewski reports that another two to five percent of enrollees who paid their January premiums failed to pay in February. That group is also likely skewed toward the previously uninsured.

This new information is devastating to a White House already on edge as the end-of-March deadline to enroll draws near. A deadline that, if delayed, would cause insurance costs to soar even higher.