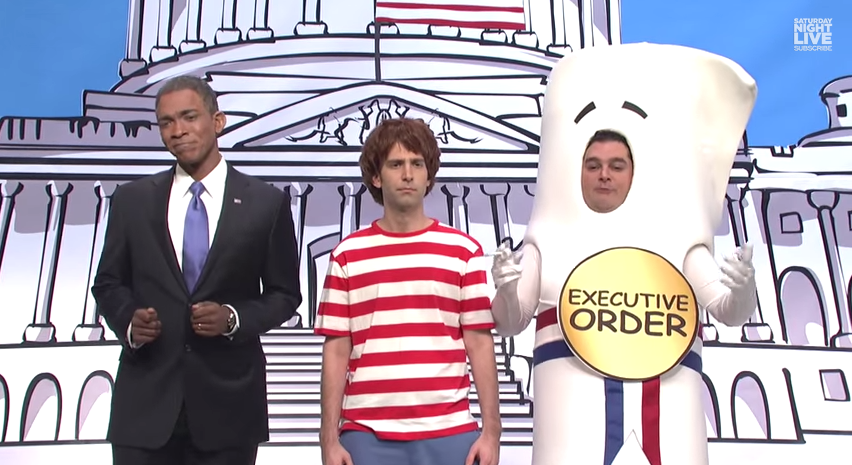 The skit uses Schoolhouse Rocks! "I'm Just a Bill," an educational short which explains how a bill becomes a law, to explain how the executive actions and orders have undermined this constitutional process. In the skit, the bill (Kenan Thompson) sings about how he must first be passed by Congress before he winds up on President Obama's (Jay Pharoah) desk. Obama, however, pushes the bill the bill out of the way, sending him tumbling down the steps.

"[T]here's actually an even easier way to get things done around here," says Obama. "It's called an executive order." The executive order (Bobby Moynihan) comes on screen, singing to the tune of the Schoolhouse Rock! song, "I'm an executive order, and I pretty much just happen." When asked about the role Congress is required to play in the process, the executive order responds, "Aw. That's adorable. You still think that's how government works."

The bill keeps trying to come back up the steps, only to be pushed back down by Obama, who argues that presidents "issue executive orders on the time." The executive order chimes in with the melody, "That's right. I can do lots of things. I'll create a national park or a new holiday."

Though parody, the skit offers a peak down the perilous path President Obama has taken. While immigration may be the policy subject, ultimately, the real issue here is the continuing expansion of executive power under this administration. President Obama's friends will argue that he's issued fewer executive orders or actions than his predecessors, but the substance of his rule by decree has further blurred the constitutional lines between the executive and legislative branches.

In 2008, then-candidate Obama blasted the power grabs of his predecessor. “I taught constitutional law for ten years. I take the Constitution very seriously," Obama told a crowd of supporters. "The biggest problems that we’re facing right now have to do with George Bush trying to bring more and more power into the executive branch and not go through Congress at all, and that’s what I intend to reverse when I’m president of the United States of America."

But, in the Oval Office, President Obama has tossed his academic views aside. Instead, he's further expanded the powers of executive in a way that would make his predecessors blush by completely rewriting statutes in ObamaCare, waging war without congressional authorization, ignoring due process rights of American citizens, and, now, bypassing Congress on immigration.

The problem with this expansion of executive power and lawlessness, outside of the obvious constitutional implications, is the very real likelihood that President Obama's successors, both Democratic and Republican, will use it as precedent to push policy without the consent of Congress. This is an ominous situation for the American people, whose rights and liberties are almost an afterthought in the current debate over executive power.

Lets introduce some facts here as this article makes a number of incorrect assertions. First of all the use of the word... "Lawlessness". For starters you will need to specify exactly what the President did that was against the law. The actions he took were in fact well within the lawful and constitutional powers vested within the President's position. So strike one. That would also make the title of this story null and void: The President's actions were also not "unconstitutional". In fact, the title makes no sense " Unconstitutional executive action" Please explain how something that is constitutional can be UN-constitutional.

I'll conclude by stating the obvious facts and these are very easily available to anyone with a search engine. President Obama has issued less executive orders than any other US President- both Democrat and Republican- in over 100 years. In those past 100 years never has there been an instance where an executive action was deemed unconstitutional- again because it is a legislative right held within the office of the President.

The talking points I provided were from unbiased sources and its fairly easy for you or anyone else to look up the facts: The President has in fact issued fewer executive orders than any other in over 100 years. But even if he had issued more it would still be well within his constitutional authority. Hence no laws broken. Hence why this article is bogus.

Do you even read the articles before posting your DNC provided talking points?

Right there in the first paragraph, the article says, "President Obama's friends will argue that he's issued fewer executive orders or actions than his predecessors, but the substance of his rule by decree has further blurred the constitutional lines between the executive and legislative branches."

Even Obama himself has previously said that he does not have the legal authority to unilaterally change the law. Congress makes law and the President is supposed to "faithfully" enforce it.

So, what happens when a Republican president decides to apply Obama's precedent of prosecutorial discretion to waive the individual mandate in the PPACA? Or instructs the IRS not to enforce collection of capital gains taxes? I imagine your tune will change then...

Key Vote NO on Amending the First Amendment

As one of our over 6.6 million FreedomWorks activists nationwide, I urge you to contact your senators and ask them to vote NO on S.J. Res. 19, a proposed Constitutional amendment that would enshrine into law the government’s ability to restrict political free speech. Sponsored by Senator Tom Udall (D-NM) and co-sponsored by 48 of his colleagues, this amendment would take the unprecedented step of amending Americans’ First Amendment rights.

Personal Freedom and Prosperity 110: The Rule of Law Constitution: The Congress shall have Power … to declare war

A Case You Should Know About From Each Circuit Court: Part 2

Covering one decision from Circuits 6 through 11, this article is Part 2 of a collection of court cases that you should know about. Court activism throughout the country affects you and your rights so take a glance at the cases below to see the precedents being established that are threatening your civil liberties.

After a report last week that rising insurance premiums would drive employers to dump 90 percent of workers’ health care plans by 2020, the IRS went into damage control mode using its preferred course of action: executive fiat.

Personal Freedom and Prosperity 110: The Rule of Law In drawing up the Massachusetts Constitution, John Adams described the Rule of Law as “to the end it may be a government of laws, not of men.”