Where Do Democrats Stand On Justice Reform? 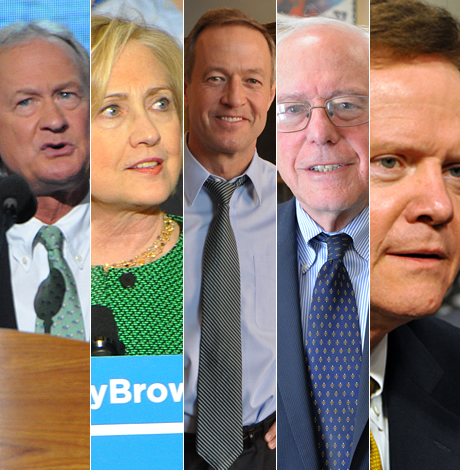 While Republicans have led the charge on bipartisan justice and judicial reform in the congress and on the campaign trail, the 2016 candidates for the Democratic Party's nomination have seemed to have been silent on the matter publicly. Here is a breakdown of the current Democrat candidates and their stance on justice reform, based off the FreedomWorks issue set, going into the upcoming DNC primary debates.

Mandatory Minimum Sentencing: Clinton recently began to touch the topic of justice reform in the past several months. In a May speech to supporters, The New York Times stated Clinton gave "an impassioned plea to mend the nation's racial fissures and overhaul an 'out-of-balance' justice system." Pointing out the large percentage of the population currently in America's prison system, she referenced the large number of "low-level offenders" currently incarcerated. While many cheered Clinton's support for downsizing the large number of citizens currently behind bars, what has bothered some is the speech she gave when her husband was in office, which shows a contradictory view of this issue she held for several decades:

According to an Institute for Justice report from 2001, Clinton was a hard charger for her husband's push for harsher penalties and punishments for law breakers, "consistently support[ing] increased penalties and additional prison construction." During a primary debate from her first run for the Oval Office, Clinton was asked if she regretted the stance she held for most years, saying:

"I think that the results not only at the federal level but at the state level have been an unacceptable increase in incarceration across the board, and now we have to address that….There were reasons why the Congress wanted to push through a certain set of penalties and increase prison construction, and there was a lot of support for that across a lot of communities because…the crime rate in the early '90s was very high. And people were being victimized by crime in their homes, in their neighborhoods and their business. But we've got to take stock now of the consequences, so that's why…I want to have a thorough review of all of the penalties."

Civil Asset Forfeiture: Clinton has pointed out that during her time in the US Senate, she continually supported measures to promote community policing. In an era of policing for profit with civil asset forfeiture as a main issue in the country, she may soon take the opportunity to discuss this on the debate stage when the time comes.

Over-Criminalization: Clinton has not touched specifically on the issues of over-criminalization, yet has praised current congressional efforts to create bipartisan legislation to address the current dilemma:

"Today there seems to be a growing bipartisan movement for common sense reforms in our justice systems," Clinton said. "Senators as disparate on the political spectrum as Cory Booker and Rand Paul and Dick Durbin and Mike Lee are reaching across the aisle to find ways to work together."

Though Chafee is still in the race, he has essentially disappeared in terms of national media appearances, unlike his competitors for the nomination. During his time in office, he never veered into the direction of supporting or going against any efforts for justice reform, and since his campaign announcement, has made no solid statements regarding his stance on the issues. Chafee's campaign site doesn't even mention justice as an issue.

Over-Criminalization: Like Clinton, Sanders has yet to address specific justice topics head on, yet has supported in the community policing efforts in the past.

During his time as Governor of Maryland, the state received a grade of "C+" from the Institute for Justice. O'Malley is the only Democrat to solidify his stance on justice reform out of the other Democrats running.

Over-Criminalization: Former Baltimore police officer Neill Franklin has gone on the record saying that then-Mayor O'Malley's harsh stance on small offenses has snowballed into the current situation seen in Baltimore today. In his interview with Reason TV, Franklin stated that:

"I go back to the Martin O'Malley administration and every one of his goals has been short-term – nothing was ever long-term. And because he had these short-term goals for instant results... he left it wide open for long-term disaster," says Law Enforcement Against Prohibition executive director Neill Franklin. "And that's what we are experiencing now."

O'Malley's turn for sudden reform on these matters is a complete one-eighty turn from how he governed during his time as Mayor. A major critic of O'Malley was former Maryland Republican governor Robert Ehrlich, an issue of the Washington Examiner noted that:

"He was highly critical of then-Baltimore Mayor Martin O'Malley's zero-tolerance policing policy, which resulted in 108,000 people — one sixth of the city's population — being arrested in one year...

These [justice] reforms [pushed by Ehrlich] didn't yield overnight changes, but they represented an opportunity to turn the page. O'Malley would rail against most of them. As Ehrlich's successor, he put the brakes on the clemency initiative in particular, which in my view was one of Ehrlich's most important achievements in building hope and restoring faith in the criminal justice system."

Mandatory Minimum Sentencing: Webb had the reputation of being a leader of justice reform during his time in the US Senate. Webb proposed several bills during his term in office to end mandatory minimum sentences permanently, yet were shot down by not only Republicans at the time but also from those within his own party.

Over Criminalization: During his time as a senator, Webb attempted to fix the issue of America's growing prison population by attempting "to create a national commission to investigate justice and the reasons the federal prison population is so massive", yet his bill for the proposal was filibustered by Senate Republicans at the time.