Next Tuesday, Wisconsin will hold its recall election for Governor Scott Walker.  The impetus for this movement started early last year when the newly elected governor imposed bold changes in order to rescue Wisconsin’s deeply red budget.  As we have seen with other states in a fiscal mess, such as New Jersey, the only fix for the health of the state’s current and future economy is through a strong leader with a fearless drive to make the unpopular and difficult (but correct) decisions.  Enacting common sense economic principles should not make for a “pioneer”, yet decades of lavish spending in excess of state revenues has become the new norm, making actions based on common sense the new “radical”.

Although vilified by the Left as a heavy-fisted malefactor set on pillaging the "measly" assets of public employees, in truth all Governor Walker set forth was a moderate compromise that would salvage the economy of Wisconsin.  Far more moderate than Franklin D. Roosevelt’s staunch position that public unions should not and could not exist, Walker allowed the public employees to continue their collective bargaining of salaries, but let the State of Wisconsin determine their benefits, one of the largest drivers of cost.  This reasonable and balanced compromise between a state spiraling into deeper debt and an entire industry of public professionals paid significantly more than their colleagues in the private sector was called Act 10, the Budget Repair Act.  But, a very interesting thing has happened since the inception of this controversy.  Governor Walker’s moderate reforms have breathed new life into Wisconsin’s fiscal health.

Below is a graph from I Stand With Scott Walker's Facebook page - an impressive image of the fiscal effectiveness of Governor Walker's reforms compared to the three previous Wisconsin governors.  Governor Walker and the Republican-controlled legislature balanced the budget. 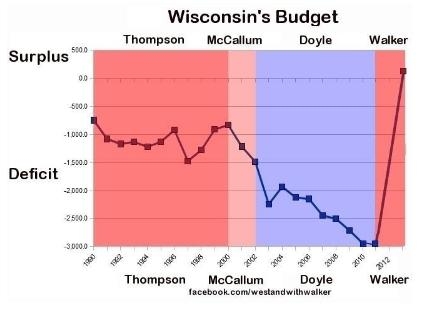 The data, in such a short time, already show an impact so transpicuously positive that in last Thursday's debate, Democratic candidate, Tom Barrett, whistled around the very issue that brought him before the voters.  Tuesday's recall efforts aren't based on the red herrings Barrett argued.  They're based on one very specific set of reforms that Barrett conspicuously avoided discussing.  Why?  Because Governor Walker's Act 10 is working.  Beautifully.

According to the Wall Street Journal,

Wisconsin Gov. Scott Walker and Milwaukee Mayor Tom Barrett held their second and final debate yesterday before voters head to the polls in Tuesday's recall election. It was the Republican governor's collective bargaining reforms that sparked the recall effort, but those reforms and their impact seemed to be the last thing that Mr. Barrett wanted to talk about.

Instead, the Democratic mayor wanted to focus on a side issue—an ongoing investigation involving several people who were aides to Mr. Walker when he was Milwaukee County executive. Mr. Walker said that his opponent's focus on the probe was sign of desperation. We take it as a sign that Mr. Barrett doesn't think the governor is vulnerable on his record.

Wisconsin's unemployment rate is 6.7%, which is well below the national average of 8.2%. According to the Bureau of Labor Statistics, the state added more than 23,000 jobs last year. And a recent survey found that Wisconsin employers were eager to hire—an indication that Mr. Walker's policies have made the state more business-friendly. Mr. Walker also managed to close a $3.6. billion budget deficit without raising taxes, which fulfilled a campaign promise.

How do you recall a governor who:

In the first year his policies are introduced?  You don't.  But, before this is qualified a complete success for the tax paying residents of Wisconsin, here's a look at the cost to the public sector employees crying foul.

...following Act 10, pension benefits for Wisconsin public employees are roughly 4.5 times more valuable than private sector levels while health benefits are about twice as generous as those paid by larger private sector Wisconsin employers. This difference results in a combined salary-benefits compensation premium of around 22 percent for state workers over private sector workers, with varying but often larger pay advantages for local government employees.

After Act 10, public employees still make significantly more in total compensation than those similarly employed in the private sector...a whopping 22% more.  And the benefits the unions are screaming were excoriated by the Republicans are still multiple times more valuable than those of the private sector tax payers footing the bill.  So, contrary to what the dishonest unions would have us believe, there are no losers.  Everyone in the state of Wisconsin wins, including those employed in the public sector.

But, in the midst of this success story is another story.  Jim Geraghty at National Review revealed what happens when government stops collecting union dues.  As part of the reforms, public employees had the opportunity to opt out of automatic paycheck deductions.  Once implemented, an astounding 2/3rds of them chose not to pay their union dues.  So, given the freedom to decide for themselves, union members do not support their own union.

So, considering the powerful impact made by just these moderate reforms, Steven Greenhut with the Franklin Center makes a very good point: why not strive for even more parity in compensation between the private and public sectors?  If Governor Walker showed Obama what real "fairness" to hard working tax payers looks like, imagine the boom Wisconsin could see with its economy.

While I am a Union member and a patriot the main problem with this entire scenario is not taking from the whole public sector. When you show favoritism to one part of the sector and not the other you set yourself up for criticism. He should have taken from those who also contributed to his campaign so he does not look like a typical RHINO.

As long as Walker and those of his cabinet took pay cuts and reduced benefits then those following him should follow his lead. Our leaders have to lead from the front and share in the sacrifice as well. He did not do enough, yes unions need to be willing to bend and share the sacrifice but those at the top need to lead by example.

Unions should all be right to work no questions asked,but collective bargaining should be allowed if the people want it. President Reagan was a backer of organized labor and understood the need for it. He gave some great speeches on the subject and we should look to his wisdom on the subject.