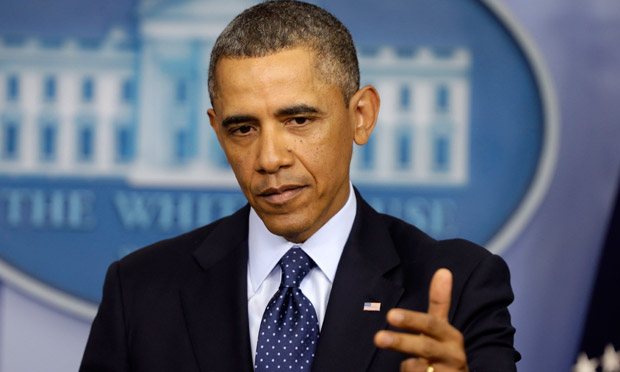 The White House is offering more details about President Barack Obama's FY 2016 budget proposal in advance of its formal release on Monday. Politico is reporting that the administration will call for an end to the sequester -- across-the-board cuts to the rate of spending increases enacted in 2011.

President Obama has already laid out some big spending and tax increases that will be included in his budget proposal, most, if not all of which are dead-on-arrival in a Republican-controlled Congress. But on Thursday, he'll tell House Democrats that he plans to go further by getting rid of the sequester, which, he says, "threaten our economy and our military."

"This time, Obama’s budget will call for an outright end to the next round of automatic spending cuts that are scheduled to take place in October. An earlier, bipartisan budget agreement between Democrat Patty Murray and Paul Ryan got rid of some of the spending cuts for fiscal years 2014 and 2015," Politico notes. "But that agreement runs out in October, and the Congressional Budget Office estimates that another $91 billion in discretionary spending cuts —$54 billion for defense, $37 billion for non-defense programs — will start then unless Obama and Congress reach a deal to prevent them."

The White House plans to use the 2013 Ryan-Murray budget deal, which rolled back $63 billion worth of planned sequester cuts, as a starting point to bring it to an end. Barring any budget agreement to undermine the sequester, the Congressional Budget Office estimates that $91 billion worth of automatic cuts will kick in at the beginning of FY 2016 in October.

Politico also says that President Obama calling for an end to the sequester is "not exactly a surprise," adding that "[h]e's been speaking out against them for years, calling them 'a really bad idea.'" In reality, the White House was for the sequester before it was against it. The Budget Control Act of 2011, which created the sequester, was a measure that had strong bipartisan support in both chambers of Congress and was signed into law by President Obama.

During a November 2011 press conference, President Obama pledged to veto any effort to undo the sequester. "[T]he question right now is whether we can reduce the deficit in a way that helps the economy grow, that operates with a scalpel, not with a hatchet, and if not, whether Congress is willing to stick to the painful deal that we made in August for the automatic cuts. Already, some in Congress are trying to undo these automatic spending cuts," he told reporters. "My message to them is simple: No. I will veto any effort to get rid of those automatic spending cuts to domestic and defense spending. There will be no easy off-ramps on this one."

But as the so-called "fiscal cliff" approached at the beginning of 2013, President Obama changed his tune. He ramped up the fearmongering rhetoric, prodding Congress to undo the sequester. Republican leaders and several influential members, for their part, also wanted to rollback defense-related sequester cuts, which, they claimed, would harm the military. Despite the claims about defense spending, this administration, according to the Cato Institute's Christopher Preble, has "approved more military spending than any presidential administration in the nuclear era." Moreover, these purported "cuts" aren't even really cuts over the long-term.

The deficit may be getting smaller, but the future is bleak, as entitlement programs and interest on the national debt begin to consume larger shares of the budget. Republicans shouldn't continue to surrender on the sequester, they should embrace it as one of the few noteworthy limited government accomplishments they've managed to win since they took control of the House in 2011.