Who Rules the Internet? FCC Bureaucrats 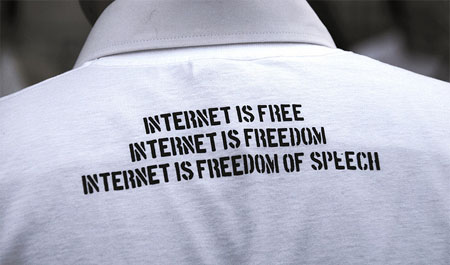 FCC Bureaucrats to Rule the Internet

Freedom of speech is absolutely indispensable for human freedom and progress. In the mid 15th Century, the invention of the printing press ushered in a period of mass communication, and the books of Martin Luther and others permanently changed the thought, culture, religion and governance of our world.

Today, the Internet has increased our levels of communication giving millions of Americans more knowledge on how government functions as well as its impact on citizens’ perception of government. There is no doubt, the Internet influences how Americans vote.

Obviously, government is threatened, and this Thursday three members of the Federal Communication Commission (all Democrats) intend to place the Internet under the control of the FCC. The FCC will have the power to choose what “charges” and practices” are “just and reasonable.”

As reported in the Wall Street Journal, L. Gordon Crovitz explains the power and reach of “just and reasonable.”

*Information Age** Bureaucrats can review the fairness of Google ’s search results, Facebook ’s news feeds and news sites’ links to one another and to advertisers.

BlackBerry is already lobbying the FCC to force Apple and Netflix to offer apps for BlackBerry’s unpopular phones.

Dangerously the bureaucrats have more power:

Bureaucrats will oversee peering, content-delivery networks and other parts of the interconnected network that enables everything from Netflix and YouTube to security drones and online surgery.

The power play to control the Internet started in late September when the Obama Administration concocted a media campaign to coerce the FCC. A White House meeting was called and, according to the Daily Caller, these political activists attended: Free Press, Fight for the Future, Demand Progress, Daily Kos, Public Knowledge and several others.

Individual meeting attendees also included PR, media and campaign strategists Michael Khoo, Karley Kranich and Cheryl Leanza from Spitfire Strategies and A Learned Hand as well as Martha Allen with The Women’s Institute for Freedom of the Press.

In November, President Obama released a video pressing the FCC to control the Internet. The Daily Caller reports that Fight for the Future immediately claimed credit for Obama’s video:

“Obama’s statement has this movement’s fingerprints all over it, and it wouldn’t have happened without our work together. We’re proud. You should be too. I can’t think of a better time to make your first donation to this movement.”

On December 2, Holmes Wilson of Fight for the Future sent an email to activists claiming that netroots activists facilitated the circumstances for the Obama announcement in November.

“We were in close contact with the White House, and it was pretty clear they were only going to move once they were sure it was something that would gain them broad public support and have minimal downside. Our coalition created the circumstances in which they could move.”

Dangerously, this Thursday three bureaucrats, surreptitiously taking orders from the President, intend to control the Internet. Wrongfully, President Obama and the netroots activists have intentionally by-passed our Constitutional order. Only Congress has the power to make laws. This is a terrible abuse of power of which James Madison and our Founders abhorred.

Even more dangerous, our freedom of speech is greatly endangered.