Why Addressing Over-Criminalization Is a Vital Part of Justice Reform 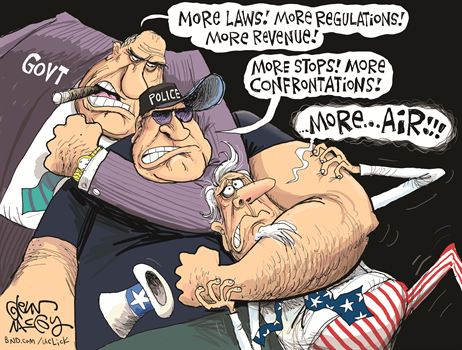 The House Judiciary Committee is poised to take up several bills dealing with justice reform. Among the bills scheduled for markup on Wednesday are the Sentencing Reform Act, sponsored by Chairman Bob Goodlatte (R-Va.), and the Criminal Code Improvement Act, introduced by Rep. Jim Sensenbrenner (R-Wis.). FreedomWorks has released letters of support for both bills.

In a video released by the House Judiciary Committee on Tuesday, Goodlatte explained the effort, which is part of his Criminal Justice Reform Initiative announced in June. "We want to make sure our federal laws and regulations effectively and appropriately punish wrongdoers, protect individual freedom, safeguard civil liberties, work as efficiently and fairly as possible, do not impede state efforts, and do not waste taxpayer dollars," he said. "Through the Committee’s initiative, we are addressing issues such as over-criminalization, sentencing reform, prison and reentry reform, improved criminal procedures and policing strategies, and civil asset forfeiture reform."

Each aspect of justice reform that Goodlatte mention is vitally important. The lengthy sentencing policies of the past have contributed significantly to the rise in the federal prison population and the lack of substantive rehabilitative programming in federal prisons have continued the endless cycle of crime and poverty that plagues many communities. The federal government's civil asset forfeiture laws are an affront to the due process rights guaranteed by the Fifth Amendment and Congress' proclivity for passing criminal laws and allowing unelected bureaucrats to promulgate regulations tied to these statutes has led to an over-criminalization epidemic.

Since the beginning of the year, FreedomWorks has spent a significant amount of time educating our grassroots activists on justice reform, with a heavy emphasis on sentencing reform and civil asset forfeiture reform. These two issues, in particular, have brought progressives, conservatives, and libertarians together to press for changes in federal laws. Whether driven by the racial disparities in sentencing, the fiscal impact of incarceration or the desire for a more effective approach to criminal justice, the momentum for reform is real.

The introduction of the Criminal Code Improvement Act is notable because it highlights an area of these issues that is often overlooked. FreedomWorks has occasionally touched on over-criminalization, but, until now, there had not been a piece of legislation that takes a direct approach to deal with it. Section 109 of the Sentencing Reform and Corrections Act does touch on over-criminalization, but this otherwise comprehensive bill does so by only directing the Department of Justice to provide a complete accounting of all federal criminal statutory offenses and the mens rea requirements for these offenses. It also requires the each of each federal agency to compile a list of regulations carrying criminal penalities.

In a June 2013 hearing, the House Over-Criminalization Task Force tried to look at the scope of the problem, which was described by Sensenbrenner in his opening remarks. "[O]ver the past three decades, Congress has created an average of 500 new crimes per decade, and the Administrative Office of the U.S. Courts estimate that over 80,000 defendants are sentenced in Federal courts annually. Many of the crimes on the books are antiquated or redundant, some are poorly drafted, and some have not been used in the last 30 years," said Sensenbrenner, who led the task force. "Moreover, many of the regulatory crimes in the code lack any mens rea, the attempt to commit a crime. That means that an American citizen may not only be unaware that he is committing a crime, but he may be held strictly liable for his conduct."

The House Over-Criminalization Task Force requested the Congressional Research Service to provide a complete accounting of all federal offenses. The agency, however, could not produce the report. "CRS’ initial response to our request was that they lack the manpower and resources to accomplish this task," noted Sensenbrenner. "And I think this confirms the point that all of us have been making on this issue and demonstrates the breadth of over-criminalization."

The lack of mens rea requirements in federal law has contributed to the over-criminalization epidemic. Mens rea, or the guilty mind requirement, is an area of the law that has its roots in Roman law and, later, in English common law, which served as the basis of the American legal system. Essentially, it defenses the mental state of a person during a criminal act. It was once said that "ignorance of the law is not a defense." Today, however, there are so many criminal statutes and regulations carrying criminal penalties that it is impossible to know every aspect of the law. Moreover, lawmakers have increasingly passed laws without mens rea requirements, making those who commit offenses, even unwittingly, strictly liable.

In a 2010 report, Without Intent: How Congress Is Eroding the Criminal Intent Requirement in Federal Law, the Heritage Foundation and the National Association of Criminal Defense Lawyers used the criminal laws passed in the 109th Congress to underscore the problem. The report noted that of the 64 percent of the criminal statutes passed by this Congress had inadequate mens rea requirements or had none at all.

The Criminal Code Improvement Act seeks to address the problem by providing a default mens rea requirement in laws where one is absent. Specifically, federal prosecutors would have to prove that the accused knowingly committed a criminal offense to convict them.

“Mens rea is a critical issue that must be addressed as Congress examines and puts forth serious criminal justice reform legislation,” said Sensenbrenner in a release introducing the bill. “Aggressive over-criminalization in this country over the past three decades has left us with a bloated criminal code that makes honest Americans and small businesses vulnerable to the legal repercussions of unintentional violations. Reform is necessary to improve our current standards, reduce our overbearing criminal code, and protect the freedoms of hardworking American citizens.”

Indeed, there are many examples of federal criminal statutes being used against people who either did not realize they had broken the law or did not intend to break the law. Yet, they were either prosecuted or threatened with prosecution. They include former race car driver Bobby Unser, who was successfully prosecuted for driving a snowmobile in a national wilderness area during a severe snowstorm; Lawrence Lewis, an engineer who now has a criminal record because he unwittingly diverted sewage into Rock Creek; and Alison Capo, who was threatened with prosecution for saving a baby woodpecker from the family cat.

The National Association of Criminal Defense Lawyers (NACDL) praised the Criminal Code Improvement Act. "[The bill] represents a very important step forward by leaders from both political parties to address a matter that has been the source of significant injustice and unfairness in the American criminal justice system," the organization said in a statement. "NACDL applauds the bold and significant, bipartisan leadership on this important issue."

There are many problems with the federal justice system that Congress has the unique opportunity to address. Obviously, sentencing reform, prison reform and reentry, and civil asset forfeiture are among them. But over-criminalization is a real problem, and lawmakers should consider adding a default mens rea to the list of necessary steps they can take to address it.