A common misconception exists in the alternative energy circle that says wind power does not cause environmental damage. This is simply not true. The wind industry has negative impact on the environment as acknowledged by the Global Wind Energy Council and other proponents of wind energy.

The EPA claims that “wind is a 100% pure, clean energy source.” Although this is technically true, it’s not entirely accurate. Because wind is inherently flux and unreliable, wind- powered energy grids require additional fossil fuel based energy to balance and stabilize them. Wind is obviously a pure, clean energy source, but to convert the energy it produces to electricity requires fossil fuel based energy.

Moreover, constructing wind farms throughout the United States has not only harmed the aesthetic beauty of our country, but has left a significant environmental footprint. A single wind turbine requires the removal of 3-5 acres of forest. Construction of wind farms also include 70ft wide access roads, the installation of new power transmission lines, the construction of substations, as well as the construction of excavations and concrete for turbine foundations.

Wind turbines additionally require the area around them to be clear of trees to maximize efficiency requiring an average of 50 acres per megawatt of capacity. The GE 1.5-MW turbine model needs at least 32 acres and the Vestas V90 model needs 78 acres for each tower on a mountain ridge. 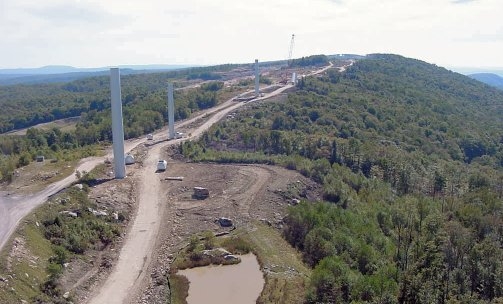 The coal, oil, and gas industries are not the only ones that disrupt local ecosystems. The wind industry does as well as evident from the data and picture above.

The actual construction of wind farms is not the only environmental hazard the wind industry imposes on its surrounding ecosystem. Most wind turbines are constructed at high altitudes to gather in more wind. Because of this, many wind turbines have experienced damage due to icing. To combat this problem, de-icing fluid is place on the wings of wind turbines. The de-icing fluid is typically made up of two toxic chemicals known as propylene-glycol and ethylene-glycol.

The de-icing fluid used on offshore wind farms as well as wind farms located on farm land is hazardous to the local fish and cattle population and contaminates the local food, soil, and groundwater near wind turbines.

The last and probably most harmful damage done to the environment from the wind industry is its destruction of migrating bird and bat populations. The United States Government Accountability Office highlighted this issue in its 2005 ‘Wind Power’ report: "Once thought to have practically no adverse environmental effects, it is now recognized that wind power facilities can have adverse impacts—particularly on wildlife, and most significantly on birds and bats."

An estimated 33,000 to 111,000 bats are predicted to be killed by wind turbines in the mid-Atlantic Highlands alone by 2020. Bats are particularly vital to an ecosystem because of the hundreds of billions of insects they consume every year.

Michael Fry of the American Bird Conservancy estimates that United States wind turbines kill between 75,000 and 275,000 birds per year! Mr. Fry told the Wall Street Journal that "Somebody has given the wind industry a get-out-of-jail-free card."

A study done in 2008 shows that a wind farm in at Altamont Pass, California kills an average of 80 golden eagles per year while killing 100 times the amount that Exxon Mobil kills with its industrial tanks. 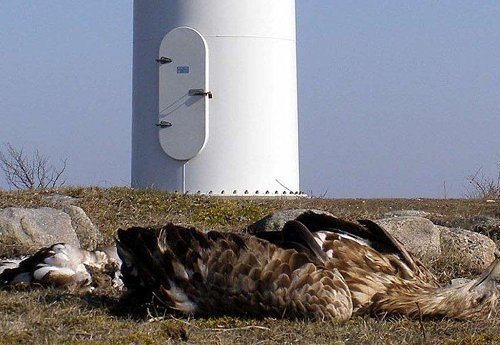 Mr. Bryce, managing editor of the Energy Tribune, stresses the absence of acknowledgment to the harms that green energy places on the environment.

This is a double standard that more people—and not just bird lovers—should be paying attention to. In protecting America's wildlife, federal law-enforcement officials are turning a blind eye to the harm done by "green" energy.

The purpose of this blog is not to say that wind energy is more environmentally hazardous than oil, gas, and coal companies. What should be acknowledged here is that wind energy is inefficient and unstable, has cost the American taxpayers billions of dollars throughout the past 20 years while accounting for a measly 2 percent to 3 percent of energy consumed, and is environmentally unfriendly, disrupting thousands of ecosystems and killing thousands of bats and birds. It’s time for Congress to let the Production Tax Credit (PTC) expire for the wind industry.

let's concentrate on the fallacy of government forcing actions that are not "sustainable" in the free market.
It makes me a little uncomfortable when we adopt Green language to go after something we don't like.