Winning WA-04 for Didier…One voter at a time 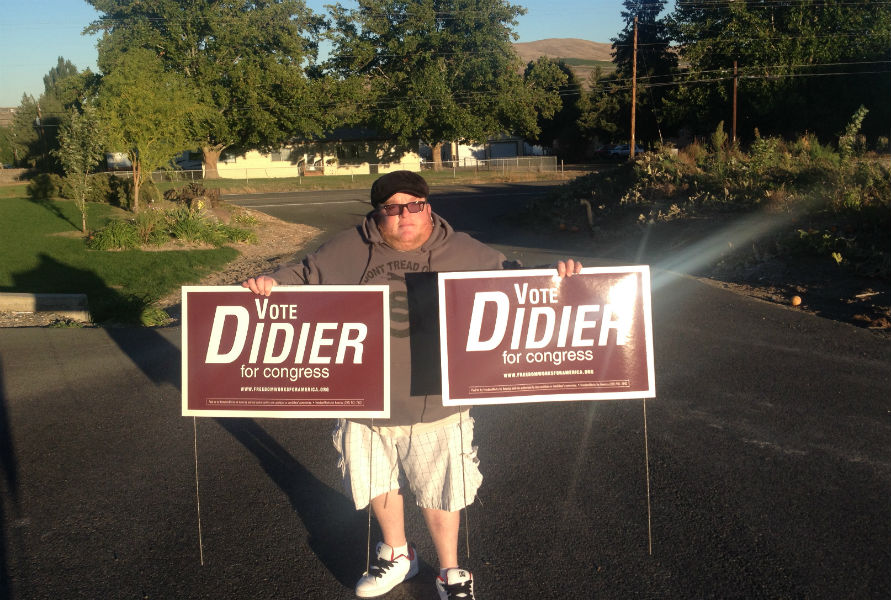 Last weekend, just as ballots were mailed out in Washington, FreedomWorks volunteers took to the streets and blanketed high traffic areas of Kennewick and Yakima with Clint Didier lawn signs. Mysteriously, these signs have disappeared, which you can read more about here.

FreedomWorks activists are also going door to door around the district, talking to their neighbors about why Clint Didier is such a great candidate.

For those of you unfamiliar with this race, Didier is running to replace longtime Rep. Doc Hastings, who is retiring. Doc Hastings is an establishment hack though and through – who has a 38% ranking on FreedomWorks’ 2014 scorecard. To give you an idea of how bad that is – there are at least a half dozen Democrats with better scores than him. This race is between two Republicans, Dan Newhouse and Clint Didier.

FreedomWorks has endorsed Clint Didier, the true conservative choice in the race.

Well – the last public poll was conducted in September, with Didier up slightly. Absent anything more scientific – let’s take a look at some anecdotal evidence.

Last night a few of our volunteers went sign waving at a major roadway in the middle of the district and recorded the responses they got as an experiment. The responses were:

Scientific? No. Accurate? Who knows.

Our volunteers on the phones and at the doors are getting similar response rates.

Heading into the last week of the race, overwhelming enthusiasm in favor of your candidate is exactly what you want to have.

Everything we’ve seen is that the grassroots momentum is favoring Didier. If you have time to help make sure Didier wins, please click here and let us know.

On to Election Day!

Democracy and Power 114: The Power Players Who actually controls the force of government? Politicians and interest groups control the American political process. Special-interest groups – i.e. big business, big unions, education, seniors, and a multitude of others - seek favors, such as tax breaks, subsidies, exclusive legislation, and the list goes on. Interest groups give enormous amounts of money to political campaigns and receive gigantic benefits in return.

0
12/04/2013
How Republicans Plan to Use the ObamaCare Exemption in 2014
"http:\/\/www.freedomworks.org\/content\/how-republicans-plan-use-obamacare-exemption-2014?social=facebook_share"
null
http://fw-d7-freedomworks-org.s3.amazonaws.com/styles/thumbnail/s3/te_social_media_share/fw_default_0.jpg?itok=35IWEBMb
Blog

In a ruling issued earlier this month, the Office of Personnel Management, at the behest of President Obama, issued a ruling that would allow Congress and their staff to escape parts of the Obamacare threat that would have left them facing a possible loss of benefits and sharply higher costs for premiums.These are the same threats the rest of America also worries about.

The FreedomCast - Episode 40 - Jim Geraghty and the Obama Administration Scandals

On today’s edition of the FreedomCast, Jim Geraghty of the National Review Online joins me to discuss the Obama Administration’s scandals, the coming reformation of the Republican party, and how Congress hides the really insidious violations of your liberty in gigantic pieces of legislation.