During the early 2000s, Democrats decried the budget deficits under President George W. Bush. Of course, they blamed those budget deficits of the 2001 and 2003 tax cuts and ignored the sizeable increases in domestic spending under the Bush administration. Still, budget deficits as a percentage of gross domestic product (GDP) didn’t exceed 3.4 percent between 2002 and 2008. (We don’t mention 2001 because Bush took office while FY 2001 was underway.) Unless Congress gets a handle on spending, we may look back on the days of 3.5 percent budget deficits as the good old days.

On Tuesday, the Congressional Budget Office (CBO) released its regular report, The Budget and Economic Outlook. The report shows the budget and economic projections for FY 2020, as well as the ten-year budget window, FY 2021 through FY 2030. The budget projections are a nightmare for fiscal conservatives. The CBO projects an average budget deficit of $1.309 trillion between FY 2021 through FY 2030, or just under 5 percent of gross domestic product (GDP). The return of a $1 trillion budget deficit is projected to happen in FY 2020. Budget deficits will continue to grow, reaching $1.7 trillion, or 5.4 percent of GDP in FY 2030. 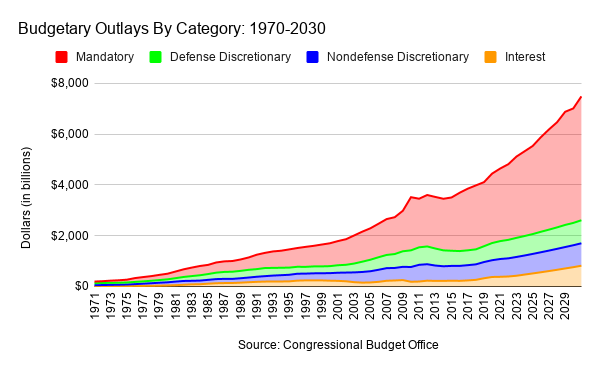 The reason for the increase is that the American population is growing older, and there aren’t enough people entering the workforce to replace those who are retiring and receiving Medicare and Social Security benefits. The three major entitlement programs — Medicare, Medicaid, and Social Security — will represent 47.2 percent of all federal spending this year and 54.1 percent in FY 2030.

Overall, federal spending in FY 2020 will be 21 percent of GDP, which is a little higher than the 20.4 percent average between FY 1970 and FY 2019. Federal spending as a percentage of GDP will, of course, grow to 23.4 percent of GDP because of the growth in mandatory spending. The CBO also provided an update to long-term budget projections, although these are not as detailed. By 2050, federal spending is projected to be, under current budgetary assumptions, 30.4 percent of GDP, which would put the United States close to the level of spending seen in Switzerland, which spends less as a percentage of GDP than other European countries. 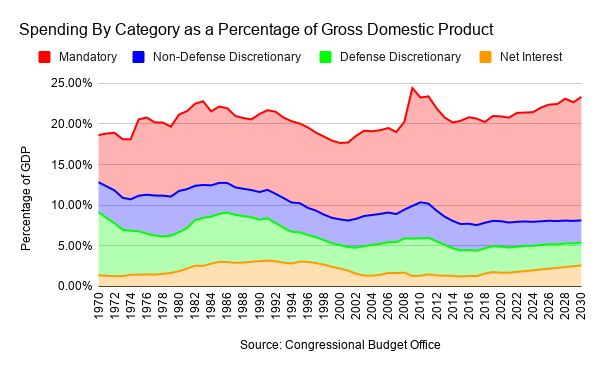 Individual tax receipts are the primary source of tax receipts for the federal government, representing 49.6 percent of revenue in FY 2019. These receipts will be the majority share of revenues by FY 2026, which reflects the expiration of the individual tax cuts and pass-through businesses changes under the Tax Cuts and Jobs Act.

Although the tax cuts did result in a small decrease in projected revenue from individual income taxes, these revenues still represent a higher share of GDP than any point in the 1950s, a period during which the United States had marginal tax rates between 91 percent and 92 percent. Individual tax receipts as a share of GDP didn’t eclipse 7.8 percent of GDP in the 1950s, according to the historical figures provided by the Office of Management and Budget (OMB). In FY 2020, that figure is projected to be 8.1 percent, and it will continue to rise. 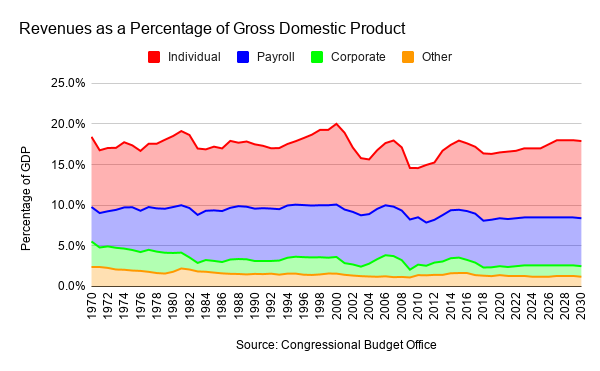 A cut in tax rates can’t be looked at in static terms. One has to look at the larger potential impact beyond federal revenues. After all, individuals and businesses respond to changes in the tax code. In this case, individuals have money in their bank accounts and businesses, small and large alike, have more money available to hire more workers or expand and invest. This has, in turn, increased economic growth.

In 1970, only 27 percent of the national debt was held by the public as a percentage of GDP. In 2020, that percentage has more than tripled to 81 percent and is projected to double again to 180 percent by 2050. This means that should current trends continue unabated, the share of the public debt held by the public would be nearly double the total value of all finished goods and services produced by the United States in an entire year. As difficult as it may seem to pay back our debt as it stands today, allowing the debt to exceed GDP would present a perilous tipping point. 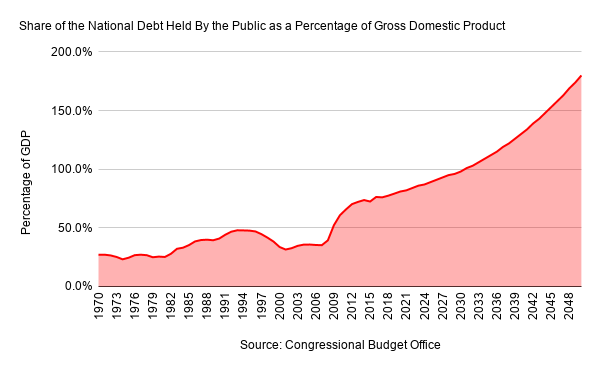 One need only look to the examples set by defaulted countries to witness the danger of debt held by the public exceeding GDP. Greece faced one of the worst economic collapses in European history after the debt-to-GDP ratio rose to as much as 179 percent, forcing the country to implement extreme austerity measures. Since January of 2012, Cyprus has been relying almost solely upon a $3.2 billion predatory loan from Russia since its debt-to-GDP ratio went positive, maxing out at 110 percent. Although America’s global economic strength means that such a stark future might still be a long way off, it is essential that we begin tackling our debt-to-GDP ratio before we reach a tipping point from which there is no return besides bailout.