As the chart above shows, individual income tax receipts are actually projected to be higher as a percentage of GDP than the previous five decades. Now, some may say the comparison isn’t accurate because the individual tax cuts in the Tax Cuts and Jobs Act will expire at the end of 2025 unless Congress extends them. That’s true. But if we cut the projected tax receipts off after 2025, individual tax receipts would be 8.4 percent of GDP, higher than any of the any of the previous five decades. (Click here to see a larger version of the chart below.) 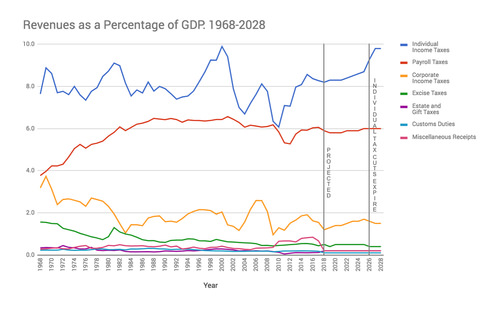 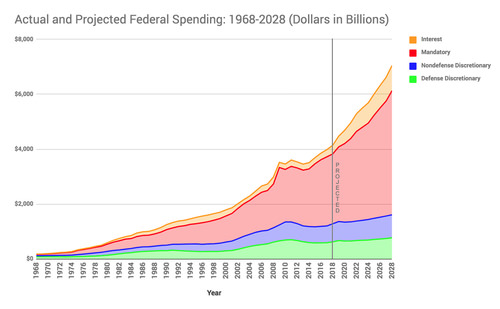 The growth of mandatory spending is not a surprise. Yet, members of Congress from both parties continue to ignore it, preferring to kick the can down the road to let a successor address.. But mandatory spending will eventually leave Congress with tough choices. They will either have to reduce spending on defense and/or nondefense discretionary programs to mitigate the growth of mandatory spending. The recent budget deal, however, essentially guarantees that this scenario won’t happen. A new baseline for spending has been created for FY 2018 and FY 2019, setting up spending increases in the out years that CBO doesn’t measure because it’s not current law.

Increasing taxes is another option, but it comes with a steep price: diminished economic growth. Some combination of spending reductions and tax increases is an option. Doing nothing is another option, but that presents another set of problems if borrows begin to worry about the United States’ ability to pay debt. Such a concern will lead to higher interest rates, leading to an increase in payments for debt service, which is another aspect of federal spending that is on the rise because of large deficits.

Democrats, as well as some Republicans, who are complaining about the Tax Cuts and Jobs Act are ignoring the growth of federal spending. It has been said before, but it needs to be said again — Congress doesn’t have a revenue problem; it has a spending problem. Revenue collections are projected to be near historical averages. Spending, however, will continue to rise until the political will exists in Congress to address this fiscal challenge.