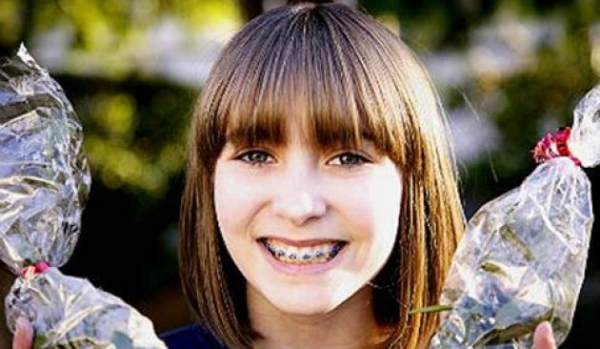 Like many 11-year-old girls, Madison Root has braces. Wanting to help her parents’ pay the orthodontist, Madison decided to sell little pieces of mistletoe she clipped off bushes at her uncle’s farm.

Last Saturday morning she stood at the well-trafficked Portland Saturday Market and sold the holiday favorite, each hand-wrapped and tied with a red bow. That’s when security personnel arrived.

A private security guard told Madison that her entrepreneurial initiative was a crime. The market is held in a public park and Portland city ordinance bans little girls from selling mistletoe without proper approval from city bureaucrats.

Little Madison committed the shocking crime of practicing capitalism without a license.

The guard kindly informed Madison that if she wasn’t willing to sell her products outside the park's boundaries, she could ask people for donations. Child entrepreneurs are illegal, child beggars are not.

To her credit, Madison was disgusted by the idea. "I don't want to beg!” she told local television reporters. “I would rather work for something than beg.” The news crew pointed out other people in the area: protestors asking for signatures, musicians asking for money, and lots and lots of panhandlers.

"It's crazy. People can get money for pot. But I can't get money for braces. I'm working for this! They're just sitting down on their butts all day asking for pot."

Mark Ross, a spokesman for the Portland Parks Bureau, says that begging is a form of free speech, protected under the First Amendment. Selling Christmas trinkets to help mom and dad with their bills is not.

Most parents dread the orthodontist’s invoice, especially now since Obamacare tacked on a Medical Device Tax to the bill. "I felt like I could help my dad with the money," Madison said, noting that the total cost will be $4,800.

Thankfully, the word is getting out about the Madison's plight. Since the first local news report aired, about $3,000 of mistletoe has been ordered and Portland’s mayor is allegedly “reviewing the city code.” The market has also invited Madison back, waiving the official permit fee.

Madison isn’t the first budding businesswoman shut down by red tape. Local bureaucrats are famous for shutting down kids’ lemonade stands, citing lack of business licenses, city permits and health inspections. Government’s bullying of kids is so common an entire movement has been started to protect kids like Madison.

Instead of telling kids to beg for a little extra money, perhaps government officials should beg citizens to let them keep their jobs. Because from Madison’s vantage point, it seems like these taxpayer-funded bureaucrats have too much power and too much free time.

The Serious Reality for Kids In Solitary Confinement

Locking a child up for extended periods of time ranging from several days, weeks, months, and even years without human contact for 23 hours a day causes permanent psychological damage. Children are in the crucial stages of development; it is important to consider that solitary confinement does particularly affect youth physically and emotionally, which can lead to irreversible trauma, psychosis, depression, and even self-harm. Half of all suicides in juvenile facilities occur when youth are in solitary confinement.

1
05/12/2014
"Oregon Set To Say Goodbye To Its Doomed Health Care Exchange"
"https:\/\/www.freedomworks.org\/content\/oregon-set-say-goodbye-its-doomed-health-care-exchange?social=facebook_share"
"Oregon is saying goodbye to the terminally ill Cover Oregon, after millions in wasted taxpayer money, FBI investigations, lawsuits and political fallout that will be felt for years to come."
https://fw-d7-freedomworks-org.s3.amazonaws.com/styles/thumbnail/s3/field/image/CoverOregonPic.jpg?itok=Vfjq3DvT
Blog

In 2011, with bipartisan support from both Democrats and Republicans, Cover Oregon was ushered in as the vanguard of the state based healthcare exchanges encouraged by the Affordable Care Act. Instead of resisting the Obamacare mandate, the Oregon legislature doubled down on Obamacare, with the encouragement of our Democrat Governor, former ER doctor John Kitzhaber. Despite innumerable warnings from grassroots activists that the project was doomed to failure, most Republicans in the legislature were persuaded to go along. Now, Oregon is saying goodbye to the terminally ill Cover Oregon, after millions in wasted taxpayer money, FBI investigations, lawsuits and political fallout that will be felt for years to come.