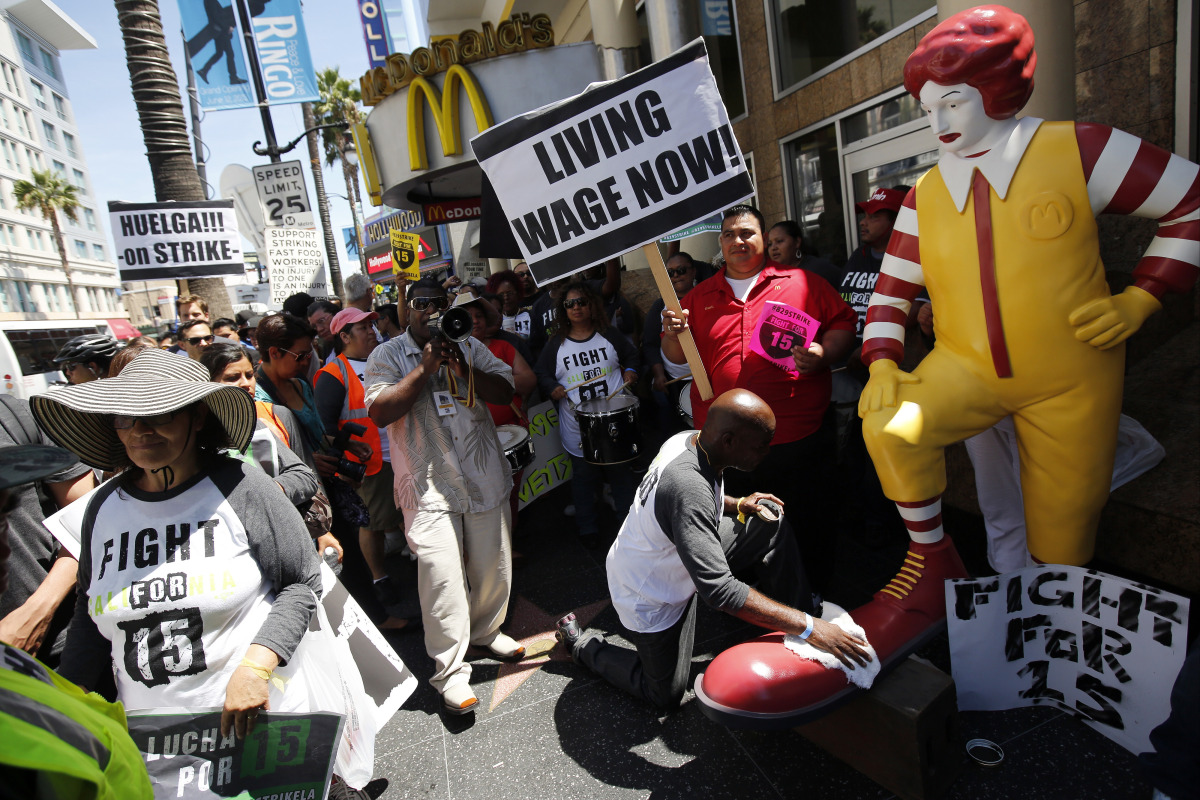 “A higher minimum would undoubtedly raise the living standard of the majority of low-wage workers who could keep their jobs. That gain, it is argued, would justify the sacrifice of the minority who became unemployable. The argument isn't convincing. Those at greatest risk from a higher minimum would be young, poor workers, who already face formidable barriers to getting and keeping jobs.”

“A humane society would learn from its mistakes and keep trying. The idea of using a minimum wage to overcome poverty is old, honorable - and fundamentally flawed. It's time to put this hoary debate behind us, and find a better way to improve the lives of people who work very hard for very little.”

Where do these words come from? No, not Milton Friedman, or National Review, or the Heritage Foundation. Those are the words from a New York Times editorial in 1987. Its headline? “The Right Minimum Wage: $0.00.”

A question for the NYT: how is it that some basic laws of economics have managed to render themselves moot in just a couple decades? “Virtual consensus” and “fundamentally flawed” are some pretty strong and authoritative words, aren’t they? (And let it not be forgotten that this was during the Reagan years, when economic conditions were much more favorable than today's Obama malaise.)

With 20 states plus the District of Columbia ringing in 2015 with rises in their minimum wage (some are just by a few cents), it's high time we revisit the inevitable unintended consequences of government-manipulated markets.

As with most every topic of debate, the left wins the PR war soundly (after all, who can possibly argue against a “living” wage?), but loses the war of facts and substance in shocking fashion. The picture painted by the left regarding minimum wage workers is always that of the noble single mother who has to work three jobs just to feed her three hungry children. Discounting all the economic fallacies of higher minimum wage supporters, even that picture couldn't be more false.

According to Mark Wilson of the Cato Institute, based on BLS statistics, of the roughly 1.8 million of minimum wage earners in 2010 (there are approximately 3.3 million today) almost half were teenagers or adults under 24, with a large majority of them living in families with incomes of more than double the poverty line, and only 20.8 percent of all minimum wage workers were family heads or spouses working full time. Only 11.3 percent of the workers who stood to gain from an increased minimum wage even lived in “poor” households.

Some basic facts of minimum wage are:

Combined with the Obamacare employer mandates kicking in this year, 2015 could be a painful one for countless businesses and those unemployed or underemployed. Just imagine how much worse it'd be nationwide if Obama and company got their way with a 28-plus percent bump in the national minimum wage, or if it weren't for these painfully pesky record-low oil prices.

I spent years working at some if those crappy jobs that pay minimum wages. I now make a decent income and will NEVER darken the door of any of those crappy companies who treat their employees like garbage. Calling a rise in minimum wage a negative thing is idiotic

Anyone not liking where they work must go find another job! This is The United States of America !! This is the way its done here. If you think we can dump on our employers you should go live in one of the countries where they can tear their employers apart. Where they have free health care. Where they dont have taxes...

On Friday, the Labor Department will release the last monthly jobs report before the midterm elections. Economists have already predicted that it won’t bring good news for the US economy. According to 62 economists surveyed by Bloomberg news, Unemployment climbed to 9.7 percent from 9.6 percent in August…The data may also show companies added 77,000 workers to payrolls, and total hiring stagnated.

Remember back in June when the Obama administration promised the American people a “Recovery Summer?” Vice President Joe Biden assured us that “some time in the next couple of months we’re going to be creating between 250,000 jobs a month and 500,000 jobs a month.” To the contrary, the economy has lost 283,000 net jobs this summer

On Monday, President Obama took yet another swipe at those who oppose his government expansion policies: When it comes to just about everything we’ve done to strengthen our middle class, to rebuild our economy, almost every Republican in Congress says no…If I said the sky was blue, they say no. If I said fish live in the sea, they’d say no… Their slogan is ‘No we can’t.'

Despite Obama’s Promise of “Recovery Summer”, 54,000 Jobs Lost in August

The American people were told by the Obama administration that this would be the “summer of recovery.” Joe Biden notoriously claimed that "you're going to see, come the spring, net increase in jobs every month." Thus far, the economy has lost a total of 283,000 jobs this summer alone.

Clearly, President Obama’s economic advisers’ policies have failed to produce any signs of economic recovery. A new report shows that 48 out of 50 states have lost jobs since the “stimulus” was enacted in February 2009. According to the report, government employment in Washington DC has increased while private sector jobs have stagnated across the country.

Today, the Labor Department’s monthly jobs report revealed that the unemployment rate remained unchanged at 9.5% for July. While the private sector added 71,000 jobs last month, not enough jobs were created to lower the unemployment rate. According to North Carolina State University economist Mike Walden,  We’re not there yet...

Today, the monthly ADP National Employment Report was released indicating that an estimated 42,000 private sector jobs were gained in July.

Ranking Member of the House Ways and Means Committee, Dave Camp (R-MI), released data which compares the White House’s projected job gains as a result of the stimulus and current change in employment.