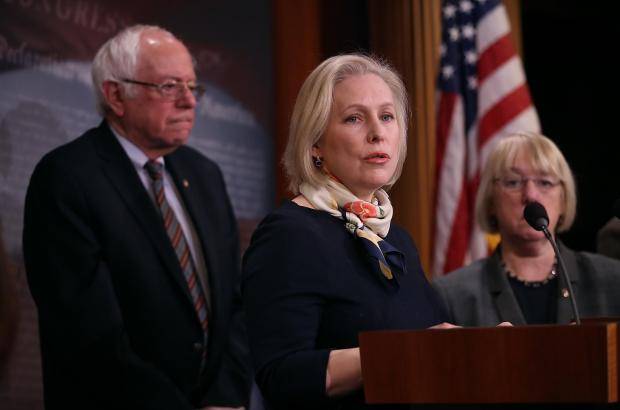 Sanders and Gillibrand launched proposals to combat the Make America Great Again agenda – with pure socialism. On Sanders’s side, we may as well call it communism. Sanders proposed a federal “jobs guarantee” while Gillibrand wants government banking and low-interest loans at every post office in America. Of course, economic reasoning reveals both to be horrendous ideas.

Let’s start with Sanders' job guarantee. It would provide a government job to any American who wants one, pay a “livable wage,” and include Medicare and childcare benefits. Sanders admits he doesn’t know how he’d fund the plan. As bad as that is, let’s put it aside and look at its effects on the economy.

First, let’s set the “livable wage” paid by Sanders’ guaranteed jobs to $15 per hour, as progressives often demand. The immediate impact would be termination of all jobs paying less than $15 per hour plus benefits. Since government jobs are guaranteed by decree, it would be nearly costless to apply, and roughly everyone able to work and currently making less would make the switch.

Government would now be responsible for managing this labor force, which could amount to as much as 49% of the population, by the US individual income distribution. This figure assumes that anybody working fewer than 37.5 hours per week at a wage less than $15 per hour would switch to Sanders’s guaranteed full time work. Why wouldn’t they?

Thousands of low-skill, entry level jobs would vanish from the market. So would the businesses that depend on them. Grocery stores, fast food, customer service, and seasonal employers would see all their workers leave. Instead, the goods and services provided by each institution would need to find alternative sources of production. They’d invest in costly machinery or reduce output to provide only the most profitable services. Any business that depends on low wages and survives a Sanders job guarantee would become more expensive. Enjoy the new $25 menu at McDonalds.

Or, even worse, Sanders’ jobs program would have government provide goods and services like it’s a company. That’s communism. Bernie Sanders wants a government labor force to provide the services lost by sucking away their labor. The means of production would be seized.

And, by the way, government would foot the payroll for all these employees. Who knows how many people would sign up and how much it would cost, but the results will definitely be bad. Rather than allowing innovators and customers to fill market demands according to their wants and needs, politicians in Washington will decide everyone’s wants and need by law. Instead of providing things that people value, they’ll provide things that Congress values. And we already know what Congress values – corporate welfare for its pet projects and donors. There’s a 0% chance that government provides services at an efficient result for this reason. It’s always better for you to choose what you want with your money.

More likely though, the program will be a money losing disaster, taxpayers will be on the hook, and the program will have no incentive to respond to market forces. Look at the Post Office, an existing state-run enterprise. It provides subsidized service and bloated benefits to its employees while losing money every year. It also isn’t that great of a service. Expand that to numerous fields and social justice projects led by Sanders, and you get the picture. When times get tough, laws will prevent the Sanders’s job monstrosity from making proper adjustments, like reducing benefits, firing unproductive workers, or investing in better ideas. There are few worse ideas.

That leads us to Senator Gillibrand’s public sector banking plan, which is also bad. Her pitch to 2020 liberal activists is providing both checking accounts and loan services to “unbanked” Americans at Post Offices. This sounds nice and compassionate, but it’s just another welfare program.

Some Americans can’t open bank accounts due to poor credit ratings and minimum deposits. People accrue bad credit when they make awful financial decisions. Minimum deposits cover cost a bank incurs to open customers accounts. Gillibrand wants government to pay for both poor decision-making and the costs of opening an account. That’s not the worst part, though. The US Postal Service offered checking and savings accounts for decades until President Lyndon Johnson repealed them, seeing they were completely unnecessary given the availability of banking branches.

Gillibrand’s worst idea is low-interest temporary loans to combat the “payday loan” industry. Payday loans are short term loans with enormous interest rates. The typical payday loan is about $375 with more than double its size in fees. These loans are often used by people for services deemed too risky by normal bank lenders, thus the high interest rates.

Gillibrand proposed giving struggling Americans loans up to $500 with interest rates matching the yield for month Treasury bills, a mere 1.65%. The result would be massive losses for the government. Interest rates are high on payday loans because people who use them are highly likely to default. Only those who truly believe they can pay back the money will use the loan. Loans with a 1.65% interest rate will provide low-cost risky decision-making to the riskiest people.

Government will foot the bill when a large portion of these loans default. The Postal Service would also need methods for tracking down defaulters.

Both Sanders’ plan for guaranteed jobs and Gillibrand’s plan for subsidized banking will make our economy worse and government bigger. Don’t buy into socialist sales pitches in 2020.

Do we expect this whole story on any app ?. Am a big follower of SilentGhost HD App and we are expecting this whole story of 2020 democrats roll out on silent ghost hd app(https://silentghosthd.com/). Fingers crossed <3 :)

What was it the late Margaret Thatcher said? "Socialism works till you run out of other people's money."