Following Nancy Pelosi’s logic, she should be thrilled to hear that the number of first-time filers for unemployment insurance rose to 500,000 last week—the highest in nine months. However, paying more people not to work will not stimulate the economy or create any jobs. As Arthur Laffer explains in his Wall Street Journal column,

Unlike the private sector, government is unable to foster economic growth since it does not have any wealth of its own. Nancy Pelosi who claimed that “we could slip back and have another recession” if Congress didn’t pass an unpaid $34 billion unemployment insurance bill, fails to acknowledge the danger of excessive unemployment benefits.

Naturally, humans respond to incentives. As a result of excessive unemployment benefits, people may not be as proactive about searching for jobs or may become pickier on which they jobs they accept.  Even White House economic adviser Larry Summers acknowledges that excessive unemployment insurances will increase the long-term jobless: 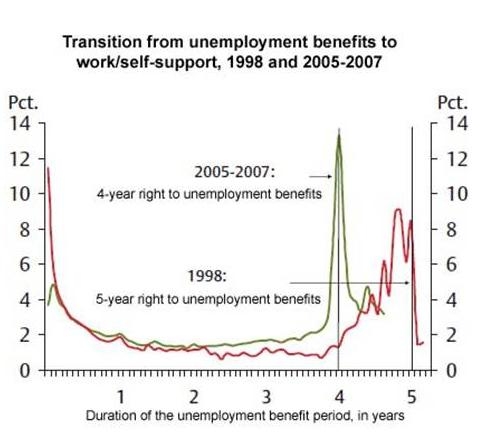 According to the New York Times,

It shows that between 2005-7, the number of people who got jobs during their four years of benefits — the green line – rose at the beginning before dropping sharply, then spiked as benefits were about to run out, only to plummet after. The red line shows similar behavior in 1998, when Denmark’s benefit period was five years.

Steen Bocian, a chief economist at Danske Bank, asserts that:

As expected, Speaker of the House Nancy Pelosi irrationally believes that paying people not to work somehow creates jobs. As shown in Denmark, excessive unemployment benefits give people less incentives to actively search for a job. Be on the lookout for Nancy Pelosi to pass yet another deficit increasing unemployment insurance extension during a Lame Duck Session that will add to billions to the national debt while not creating net new jobs.