Another Victory for Political Speech 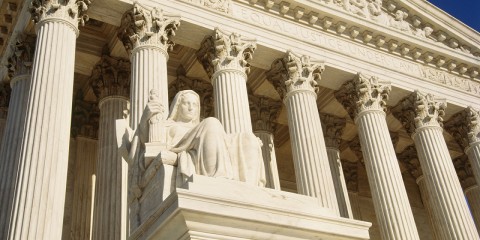 Political speech has been winning a number of incremental victories in recent years, from the 2010 Citizens United decision that allowed SuperPACs to spend money on elections, to the ruling earlier this year that struck down the overall cap on political donations.

But of course, with every victory comes a fresh assault from those who want government to control the discourse and prevent individual citizens from having their say. Since Citizens United, constitutional amendments have been drafted giving government control of money in politics and so called “dark money” has been vocally lambasted as un-American by just about everyone on the left. The IRS has tried on multiple occasions to shut down non-profit groups that participate in politics—both openly and in illegal, under the table ways.

But despite all attempts to the contrary, the winds seem to be blowing in the direction of freedom, at least in the area of political speech. The Supreme Court, continuing its good record on speech lately, is permitting a challenge to an Ohio law that bans campaign speech containing “falsehoods.”

At first it may seem sensible to prevent politicians from lying (as if such a thing were possible. You might as well try to prevent them from breathing.) However, a little thought reveals just how dangerous such regulations can be. Facts are slippery things and as much as we would like to be able to represent the objective truth in all cases, in the real world this is rarely possible. Most declarative statements are subject to some kind of interpretation. Even laws, which are purposefully written to be as objective and free of ambiguity as possible, require courts to periodically interpret their original intent.

In a political campaign, where heated accusations are wont to fly freely, separating fact from fiction becomes a hopeless exercise in futility. When one candidate says something like “My opponent supports X undesirable policy” and the other denies it, how can we really know who is right? To some degree, it’s a matter of opinion, or an inference drawn from public statements and votes taken in the past. Not being mind-readers, we cannot know the truth for sure, which means that the designated interpreter, or “fact checker,” has all the power to enforce the law on one party or the other.

This is exactly what we have seen happen with the rise of public fact-check organizations. When it comes to unilateral interpretations of facts, it is impossible to keep bias from seeping through. The Pulitzer Prize-winning Politifact frequently falls into this trap, and the infamous instance of Candy Crowley correcting Mitt Romney mid-debate over what was a legitimate difference of opinion may well have hurt Romney at the polls.

It’s not the kind of power to be taken lightly, and it is especially unwise to vest the fact checking authority in an organization with an interest in the outcome of elections. Government fact checkers are a terrible, terrible idea, because it effectively gives the political establishment the power to handicap candidates from the opposition party using the threat of legal action. If we have learned anything from the recent abuses of the IRS and the NSA, it’s that this kind of discretionary power is dangerous in government hands.

The Court wisely issued a unanimous decision in favor of the challenge, showing a rare degree of common sense in a time of political division. Hopefully they will display the same sense of justice and commitment to the First Amendment and actually strike down the Ohio law as unconstitutional.

It is noble to believe that most Americans vote their conscience, and I do believe they try to. But that's not the problem here. I am a conservative to the nth degree and believe in freedom of speech with all my heart. But I think your thoughts are gravely misguided on this and cause me concern. It is dangerous and extremely naive to think that media doesn't play a huge part in the decision making process. Should we vote our conscience? Yes... but we can only do that if we have the facts. You and I both know that what is spewed from the mouth of most politicians, and then regurgitated to the public by the media is far from being the actual facts. It is common place for facts to be skewed by a commentators point of few... such as this blog. I think everyone would agree that it would be, at best, difficult to vote our conscience without access to the truth, and this is a fundamental problem with America today. Truth is, when the facts are brought to light most Americans will, and do vote correctly, this has been proven time and time again. But we are in trouble as a country today because the public at large does not get the true facts, instead only political points of view. The issue here is giving organizations, entities, or persons the right to provide an unlimited supply of money to spread their point of view, which is usually more political opinion and minutia than fact. This gives the advantage to those who have the resources. Most Americans don't have the time to really dig into the details to determine what is truth and what is not. We rely a great deal on the media for this information. You speak of freedom of speech, I believe in that... but I also believe in being responsible for what we say. What we need are laws that hold politicians and their campaigns responsible for what they say, not the right to spend unlimited amounts of money to spread opinion. This idea has precedence... as an Investment Advisor what I say publicly is highly regulated because I am viewed as a professional and could easily abuse the relationship. By law I cannot say anything that may tend to skew the facts. However, based on your view-point my situation would be construed as an infringement on my right of free speech... to be able to say what I want. But this is not how freedom works (no pun intended). Freedom comes from being responsible for our actions and what we say. It is my belief that funding the support of the minutia machine is already a huge factor in what's wrong with America today, on both sides of the aisle... why would we want to make it worse. Instead we should be going the other direction, stop the funding from every source. In it's place a politician should be required to provide specific facts about their political stand, and be held to a very strict structure or format for decimating those facts to the public, or suffer legal consequences. Technically we have that ability today. This is not to restrict freedom of speech but to protect the public from the lies and half-truths. After, these are the guys writing the laws, as such, it makes perfect sense to me that these people should be held LEGALLY responsible for what they say to the general public. This is not to say we would restrict one from voicing their opinion, but do it on your own time, using your own means, as an individual, and not part of a funded organization, a money machine if you will, whose full intent and purpose is to sway others to your opinion. It would drastically reduce the cost of a political campaign. And in turn, would allow more good people the opportunity to run for office that now cannot do so because of the costs involved. Can't you see that there is something fundamentally wrong with a political process that takes billions to fund? You say you want right to spend more money to fund voicing your opinion. I say, require the politician to just tell the truth or be held responsible, thus allowing the people to vote their conscience based on facts, not opinions. Just my opinion.