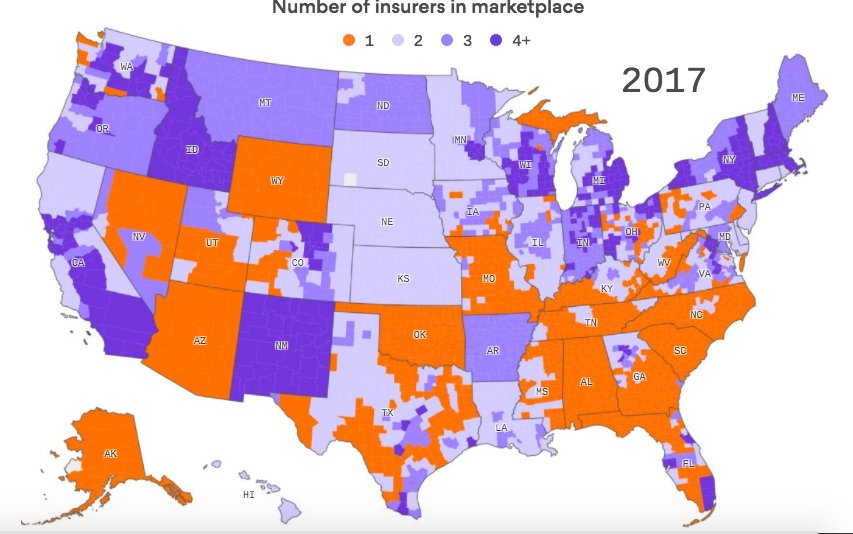 Counties With Only One Insurer

Even modern democrats pay lip service to taking on monopolies and big business. The 2016 Democratic National platform was arguably the most anti-monopolistic platform of a major political party in recent American history.

There were planks promising to promote competition and give “the little guy” a chance against big business monopolies by cutting red tape and regulations (yes it's really in there). Promising to open up markets and make it easier for people to buy and sell “across their city, across their state, or around the world” (curiously not across state lines).

The anti-monopolistic rhetoric isn’t just something that the Democrats were trying to hide in the fine print of their platform either. All the big names of the national party were speaking out against alleged monopolies. Elizabeth Warren, Bernie Sanders, and even Hillary Clinton spoke up on the dangers of allowing monopolies to form in American markets.

Any rational voter would expect these Democrats to strongly oppose policies that force monopolies on American consumers. So why aren’t they?

Democrats are fighting tooth and nail to defend one of the biggest pieces of pro-monopoly legislation passed in modern American history. In more than 1,000 counties across the country, only one company offers health insurance on ObamaCare’s exchanges. Residents of five entire states have only one insurer. By definition these regions are having a monopoly imposed on them passed by Democrats without any Republican support.

Residents are forced to buy from these insurers and are unable to seek out alternatives that might better suit their needs. And those with only one choice could be counting themselves lucky as some areas are looking at having no choices after all insurance providers leave. The most troubling aspect is more states are headed in the direction of being under the reign of a single health insurance provider.

With the monopolies created by Democrat policies have come all the problems you would expect with a closed market. Prices have skyrocketed across the country, plans have decreased in utility, and consumer choices have gone down all due to the monopolies created by Obamacare. Even where there is more than one company operating, the infrastructure of the government exchanges allows for collusion where companies offer nearly identical packages at differing rates.

When Obamacare was introduced to Congress, then-Speaker Nancy Pelosi promised America that “the bill will expand coverage, including a public option to boost choice and competition” something that most could get behind. Then-President Barack Obama promised that premiums would go down $2,500. Now Americans are faced with the harsh consequences of the the Democrats deceitful rhetoric.

The only way to save the healthcare system and get rid of the monopolies, which Democrats created and are fighting to protect, is by breaking down all the artificial barriers created by Obamacare and like minded regulations. Competition-based policies can make the lives of millions of Americans infinitely better than what they are facing right now. Americans need a full repeal of Obamacare and market-minded reforms, not more dishonest rhetoric.

Join The Thousands Demanding a FULL Repeal of Obamacare