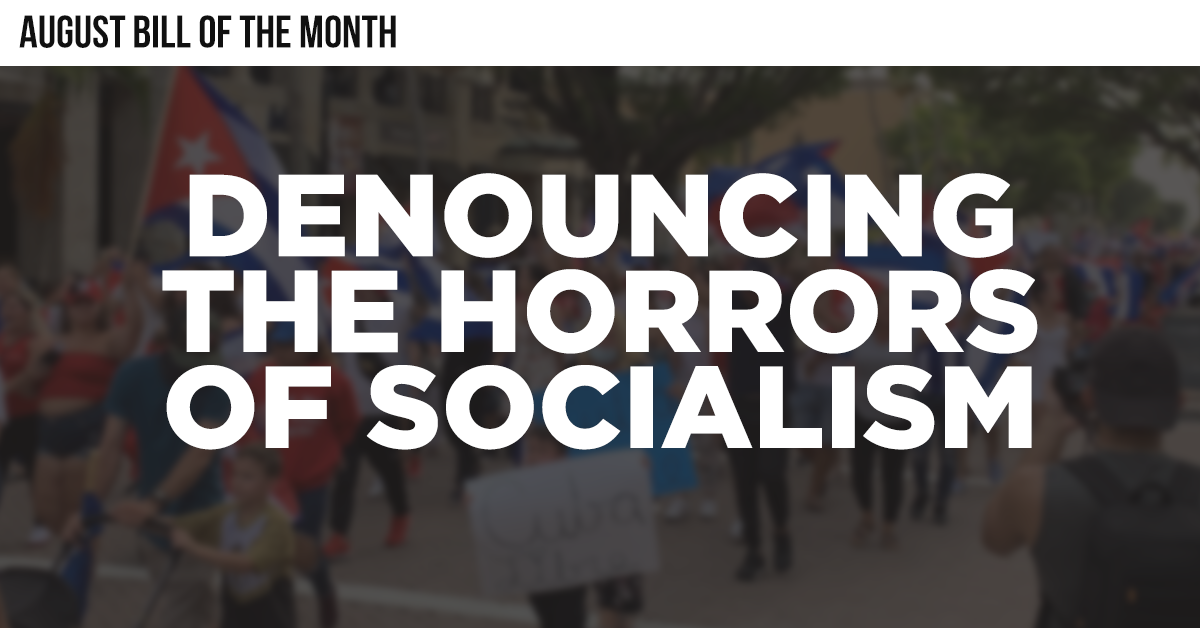 For over a century, socialism has spread devastation by destroying economies, emboldening dictators, and slaughtering millions via mass murder and starvation. Unfortunately, far too many still look at failed socialist experiments through an idyllic lens.

Left-wing commentators, politicians, and celebrities are quick to praise the socialist dictatorships of Venezuela or Cuba but are far too slow in recognizing the ruin socialism spreads. Rep. Salazar’s resolution reminds those who remain blind to the horrors of socialism's dark history.

The history of socialism is ripe with atrocity, and our elected officials must recognize the numerous failures of this debunked ideology. This resolution affirms Congress’ commitment to ensuring that America never becomes a socialist nation.

The Dark History of Socialism

The Founding Fathers on Socialism

The principles of the American tradition, personal freedom, and individual liberty are antithetical to the insidious ideas of socialism.

Our republic is a symbol of freedom for many in the world subject to the horrors of socialism. After decades of oppression and economic despair, the Cuban people are rising against the Castro regime, taking to the streets in the name of liberty waving the American flag.

During this summer of protest in Cuba, the song “Patria Y Vida,” which translates to “Homeland and Life,” is the anthem of those demanding liberation from socialist tyranny. The title is a play on the slogan “Patria o Muerte" (Homeland or Death), popularized by Castro during the Cuban revolution. The lyrics “No more lies, My people call for freedom. No more doctrines, we no longer shout homeland or death, homeland and life instead,” encapsulates how deeply the socialist regime has oppressed and abused its people.

We cannot allow the values of individual liberty that underlie our republic to fall by the wayside. The gruesome history of socialism and the current unrest in Cuba must serve as a reminder that the fight for liberty is constant.

Our elected representatives must not forget the consequences of socialism and the terror that it has inflicted on millions. Rep. Salazar’s resolution is something that all lawmakers who support freedom, prosperity, and the American tradition should embrace.

Currently, Rep. Salazar’s Resolution Denouncing the Horrors of Socialism has 201 cosponsors. Hopefully, more lawmakers will recognize the importance of denouncing the ideology that has led to the deaths of millions.