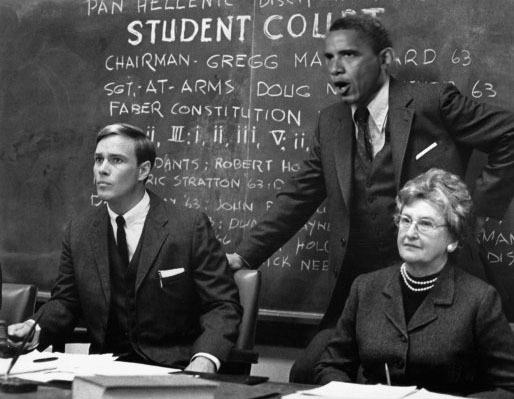 Whenever a high school grad is foolish enough to ask me for college advice, I share one simple tip: Watch Animal House.

Sure, it’s important to study and read and learn and intern and blah, blah, blah. But don’t get so pre-occupied with academic achievement that you miss out on the unique opportunity for fun, mayhem and terrible decision-making that college provides. Work hard during the week, but have a blast on the weekend.

Unfortunately, the White House doesn’t share my views about Animal House. In fact, according to the Obama Administration’s new campus rules, showing the John Belushi classic could be considered a crime.

On May 9, the Department of Education and the Department of Justice sent a joint letter to the University of Montana. While announcing a resolution with the school over past misdeeds, the feds rewrote the rules about harassment and free speech on campus.

From now on, the federal government defines sexual harassment as "unwelcome conduct of a sexual nature" including "verbal conduct," i.e., speech.  The Obama administration also declares this rule a "blueprint for colleges and universities throughout the country."

So, a creepy prof can’t perv on a coed anymore; what’s the problem? Since 2003, verbal sexual harassment had to be "objectively offensive" to a "reasonable person." This standard protected people from bogus allegations meant to chill speech.

By throwing out this precedent, the Obama Administration decided unilaterally that everyone on a college campus has the right not to be offended. The toga party has been cancelled.

The letter also states that schools have "an obligation to respond to student-on-student harassment" — even off-campus. And universities can take disciplinary action before any investigation is conducted. In other words, a college bureaucrat can simply assume a student is guilty and punish him accordingly.

Greg Lukianoff, president of the Foundation for Individual Rights in Education, is sounding the alarm:

The implications for professors and students are enormous. An unsuccessful request for a date, or even assigning a potentially offensive book like "Lolita," could now be construed as harassment. As attorney and civil libertarian Wendy Kaminer commented on The Atlantic's website this week: "The stated goal of this policy is stemming discrimination, but the inevitable result will be advancing it, in the form of content-based prohibitions on speech."

Not only does this bizarre definition of harassment ignore the First Amendment, it makes virtually every student a harasser. If one listener is offended by sexually related speech for any reason — no matter how irrationally — the speaker may be punished without so much as an investigation. And if schools don’t comply with the Obama Administration’s unconstitutional views on speech, the feds can cut off funding, including Pell grants and Stafford loans. That’s worse that double-secret probation.

A long-time fan of campus speech codes, Obama promised young voters change. If students would rather not spend their Saturday nights alone in their dorm room, terrified of accidentally uttering an offensive word, they should consider standing up for their rights.

President Wormer says this is over, but Bluto disagrees