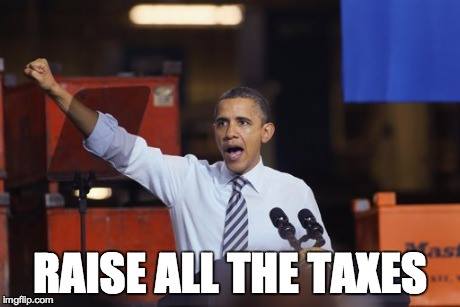 President Barack Obama has tipped his hand on how he plans to pay for his budget-busting spending increases. Media reports indicate that he plans to roll out several tax hikes totalling $320 billion in his State of the Union address on Tuesday, including raising the capital gains rate and imposing a tax on big banks' liabilities.

The proposal will include a series of tax credits for the middle-class. Tax credits, of course, are spending in the tax code, meaning that the $60 billion (7 percent) spending increase reported last week is actually much higher. The price tag for the tax credits alone comes in at $175 billion.

Looking at the proposed tax hikes, the largest one is the increase in capital gains tax rate, which President Obama wants raised from 23.8 percent to 28 percent. According to the White House, this increase would raise $210 billion over the next ten years. Targeting Wall Street investors with higher taxes may be popular, but it's a terrible idea. If there's anything the tax hikes signed into law by President Bill Clinton in 1993 taught us is that raising taxes prevents the economy from living up to its potential.

Writing on Clinton-era tax hikes in 2012, Curtis Dubay of the Heritage Foundation notes that economic atmosphere of the time should have led to rapid growth, but the policies advanced by the Clinton administration curb expansion. "From 1993 until 1997, the economy grew at 3.3 percent per year. While solid, this growth was certainly not exceptional," Dubay explained. "During that same time, real wages declined, despite the perception that the 1990s were an era of unmitigated abundance."

The rapid economic growth Americans saw under the Clinton administration didn't being until 1997, when the then-president signed a capital gain tax cut supported by Republicans into law. "While small in static revenue impact, the 1997 cuts included a reduction of the capital gains rate from 28 percent to 20 percent. This opened the capital floodgates necessary for entrepreneurs to develop, harness, and bring to market the wonders of the new information technologies," Dubay wrote. "Business investment skyrocketed after the tax cut,[6] and the economy grew at an annualized rate of 4.4 percent—33 percent faster than after the Clinton tax hike—from 1997 through the end of the Clinton presidency. Real wages reversed their downward trend and grew 1.7 percent per year during the same time."

Keeping the capital gains rate down isn't a panacea for boosting the economy, but it certainly encourages investment and benefits workers. President Obama may have an obsession with targeting investors, but raising this tax rate would have a negative economic impact.

The proposed bank tax, which would reportedly raise $110 billion over ten years, would impose a 0.07 percent "fee" on financial institutions with more than $50 billion in assets. This tax, which has long been pursued by President Obama, would impact approximately 100 banks and would likely be passed onto customers through higher banking fees. The tax reform plan rolled out last year by then-House Ways and Means Committee Chairman Dave Camp (R-MI) included a toned down version of a bank tax, and it drew opposition from several House Republicans.

There are other tax hikes President Obama plans to propose on Tuesday, including an expansion of the death tax and taxes on college savings. Ryan Ellis of Americans for Tax Reform has an excellent rundown of those and the consequences Americans will face from them.

The good news is, these tax hikes are almost certainly dead-on-arrival in Republican-controlled Congress. The proposal, however, is a sign that President Obama, who has proposed more than 440 tax hikes since he took office, plans to continue being combative with Republicans, throwing a wrench in hopes to pursue a tax reform deal, as well as a budget agreement, with the White House.