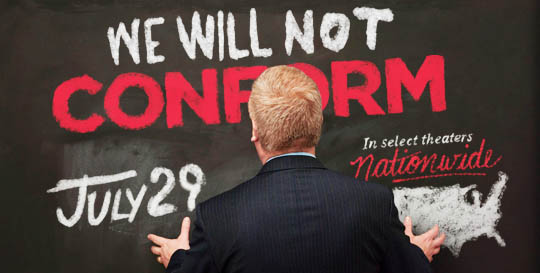 Last week, Glenn Beck assembled a group of education experts and grassroots activists in Dallas for a two hour show designed to highlight the flaws of Common Core--and suggest ways activists can fight its implementation. The live show was simulcasted in over seven hundred movie theaters nationwide. A replay of the event is scheduled for Tuesday, July 29th. I had the opportunity to interview four people connected with We Will Not Conform. We discussed the show, Common Core and the fight to stop it. I sat down with:

KERRY: You have heard of the phrase soccer mom? When it comes to Common Core there is the equivalent of a warrior mom. And what we found is when Glenn would talk about Common Core, we would get emails, calls, people coming by the studio to talk about it, and these people, predominantly women, are passionate about the education their kids are not getting in public schools.

So there wasn’t an auditorium or stadium big enough to house all these warrior moms. So we put this event together so no matter where you are, you can learn which strategies are working and which ones aren’t. You can compare notes and say “how we can take education back from government and put it back into the home?”

**MALLOY: Why should parents be concerned about Common Core? **

LOESCH: Do they like having control of their kids and what goes into their minds? Because that’s what’s at stake here. I’ve heard so often “why should parents be so concerned about common core?”

MALKIN: Common Core and Fed Ed drive wedges between students and those who know them best: their parents, their teachers & local school districts.

Everything about Common Core's development stinks: The secretive process behind it, the violation of constitutional principles, the shoddy quality, and the exorbitant bribes and costs to taxpayers. Big Business and Big Government profit most from Common Core, not children.

KIBBE: Parents should also worry about the day after their state legislature actually repeals it, because the other side is already in a rebranding phase. We have made the phrase Common Core politically poison. But they are going to come back and rebrand. So the lesson here is you can’t just fight a one-time fight. I know it’s extraordinary for parents to make these kind of commitments. But, protecting our education system, protecting our freedom to raise our kids the way we see fit is part of our responsibility as parents.

LOESCH: And it’s not just democrats that are for it. We can find common ground here because republicans are just as dirty on this as democrats are. For example, in Indiana, Mike Pence, who acted like he had this tremendous victory defeating Common Core, then he turns around and rebrands it. Of course he was booed after it. That made the news, that he was booed, not his rebranding of Common Core in a new package. A lot of activists engaged in the show tonight did not know that Mike Pence is bad on Common Core.

It’s not just democrats, it’s the republicans too and we will lose if we don’t realize that.

MALLOY: What has been the most troubling aspect of the implementation of Common Core?

KIBBE: I think it’s the way that the feds use doling out money to buy the compliance of state legislatures. It’s always sort of a bait and switch kind of a situation because they use temporary stimulus funds to build it into state budgets and now they're all locked into this. But it’s the way that state legislators are afraid to push back against something that they now know is bad politics, they probably know that it is bad policy and they are afraid to do anything about it.

MALLOY: Is it fair to compare the tactics the feds are using in the implementation of Common Core with those of Medicaid expansion?

KIBBE: Yeah, it’s the short term satisfaction of getting the money to plug your state deficit--because all of the states have to balance their budgets -- and not really caring about the details of what they are signing on for. They all know that there is a train wreck around the corner but they aren’t willing to confront it.

MALLOY: Common Core is complicated and not a sexy topic, do you see it as something that will become a campaign issue in both the 2014 and 2016 elections?

LOESCH: It could be. It depends on messaging and it depends on the ability of grassroots activists, which are mainly parents, if they are going to be able to build these coalitions and inform other parents.

Let me give you an example. I didn’t think Common Core applied to me because I am a homeschooler. I have home-schooled both my kids from the get-go. And I thought I was safe because I wasn’t in a public school. I thought I didn’t have to deal with Common Core. I have friends who send their children to private school. They thought they were safe because they are in a private school.

But it does affect us all because of standardized testing -- and college, the ACTs, all of that is going to be built around Common Core. You can’t hide from it.

Just because you take yourself out of the arena doesn’t mean the arena isn’t going to come to you. Even if you don’t have children this affects you. I personally, don’t want to think of myself as an old person with a person educated by Common Core wiping my butt and being responsible for my medicine. Have you seen the math that they’ve taught? It’s terrifying and it affects everybody.

MALKIN: Parents need to be armed with information. First: Read the standards, then follow the money. Join Twitter. Search out local #stopcommoncore leaders. Hold your public officials at every level accountable.

MALLOY: Can this We Will Not Conform simulcast be used as a blueprint for other issues based shows to get grassroots activists motivated?

KERRY: We have simulcasted a lot of entertainment events before, Glenn is all about the fusion of entertainment and enlightenment. There have been shows that he has taken on the road before that we have simulcast -- but this is the first one that is policy driven. And I think just that judging by the passion and the the attendance, this is something we will absolutely consider doing in the future.

KIBBE: It’s really the convergence of media technology and grassroots boots on the ground. We were talking to potentially tens-of-thousands of people tonight. And I always thought that the most important aspect of a tea-party rally was nothing that was said on stage, it was all about connecting people and having them discover that they aren’t alone -- getting them connected on Facebook and starting to do things together. That just happened in over 700 cities across America, and I think the proponents of Common Core have no idea what is coming next.

For more information on the encore presentation scheduled for July 29th, go to WeWillNot Conform.com.

Thank the Congressmen that stood on principle against Boehner
0
01/06/2015
""
"https:\/\/www.freedomworks.org\/content\/freedomworks-obama-keep-your-hands-internet?social=facebook_share"
""
https://fw-d7-freedomworks-org.s3.amazonaws.com/styles/thumbnail/s3/te_social_media_share/fw_default_0.jpg?itok=35IWEBMb
Press Release

While Congress debates on the McKeon Amendment to authorize the arming of Syrian rebels, FreedomWorks President Matt Kibbe released the following statement in opposition:

Washington, DC- FreedomWorks announced its endorsement today of Scott Turner for Speaker of the Texas House of Representatives. Turner is taking on Democrat-elected Speaker Joe Straus.

WHAT: School board members, legislators, and community members will meet to discuss West Virginia’s Common Core state standards, which have been re-branded as “WV Next Generation Standards.”