Chairman Ben Bernanke made two announcements Thursday about monetary policy: (1) the Federal Reserve will begin its third round of quantitative easing, and (2) it will maintain extremely low interest rates of 0 to 1/4 percent until at least mid-2015. These banking actions may sound like gobbledygook, but their effects on our country’s currency are drastically serious. Let’s translate a few things into layman’s terms.

The acronym refers to an unconventional monetary policy called “quantitative easing,” and the subsequent number refers to the specific round of easing. Yes, this means the Fed has already completed two rounds without success.

The stated goal is to stimulate economic growth. At this point the Fed has forced interest rates as low as humanly possible — any lower and lenders would be paying debtors — so the only option left is to create money out of thin air and inject it into the nation’s money supply by purchasing various banks’ financial assets.

What will QE3 entail?

The Fed will buy $85 billion in assets every month until the end of the year. Its purchases will consist of $40 billion in mortgage-backed securities (essentially mortgage debt) belonging to one of our economy’s most depressed industries.

Unlike QE1 and QE2, QE3 is “open-ended.” This gives the Fed unlimited power to extend the year-end deadline. Not only can it continue buying potentially worthless assets “if the outlook for the labor market does not improve substantially,” it admits the practice will probably be used even “after the economic recovery strengthens.”

Ultimately the choice to dilute the USD’s purchasing power is left up to Bernanke’s discretion.

Can we trust Bernanke’s discretion?

Even if QE were a sensible plan, you may ask, how accurate is the Chairman in analyzing economic trends? History’s answer: he’s terribly inaccurate. Let’s hope he doesn’t get into archery. For example, in January 2008, Bernanke explained to reporters, “The Federal Reserve is not currently forecasting a recession.” You’ll see in the graph below — obtained from the Bureau of Labor Statistics — that his embarrassing forecast was followed immediately by skyrocketing unemployment.

On the other hand, Congressman Ron Paul and investor Peter Schiff were predicting the housing crisis-fueled recession all the way back in the early 2000s. So I’m a little wary of Bernanke’s ability to properly understand the business cycle, let alone of giving him the tools that cause the cycles.

What effects will we see?

The balance sheet below — obtained from the Federal Reserve Bank of Cleveland — is a summary view of the central bank’s holdings. You can click the image to view the full-sized chart, or you can check out the Wall Street Journal’s interactive graphic featuring the same numbers. 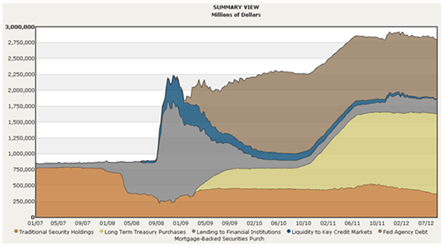 The amount of mortgage-backed securities is so worrisome because these assets are unstable and don’t disappear after the Fed’s purchase. The securities still exist and have to be released back into the economy at some point in the future. By temporarily flushing them out of the public’s view, the Fed is misleading certain investors and leaving other ones bearish. The release of these securities will be met with the realization that important resources are severely misallocated.

The immediate effects are more straight-forward.

Expect a strong boost to the stock market. The Fed begins purchasing assets today, and that means Wall Street investors who own mortgage-backed securities will have liquid portfolios to spend on other stocks. Typically zero percent interest rates signal you’ll want to invest in industries like banking and housing for a short time while the bubble grows, but, since interest rates are already zero bound, the situation is stickier.

Currency dilution also signals that gold and silver prices will increase. They’ll be used as a hedge against the impending price inflation. Any metal with intrinsic value — the currency advocated by Austrian School founder Carl Menger — will likely follow this pattern.

The details about how QE affects the rich and poor will have to wait for a future blog post. I’ll also explain the relationship between currency strength and the central bank, as well as what that relationship means for our country’s economy. In the end, policymakers will have to choose between two options: (1) monetize the debt through inflation as it’s doing now, or (2) get America back on the path to fiscal conservatism and sound, constitutional money.

What do we do now?

The "Audit the Fed" bill easily passed the House with a 327-98 vote in July. Only one Republican — Bob Turner of New York — voted "nay."

Senate Majority Leader Harry Reid is currently blocking the bill from a vote in the upper chamber. Matt Kibbe, President and CEO of FreedomWorks, has written a letter to the Senate urging "yea" votes on Senator Rand Paul's supplement, S. 202.

Join us in our fight for monetary accountability by contacting your senators and telling them to support an audit of the central bank. You can also share Congressman Ron Paul’s FAQ sheet with your friends and family for more information on why this action is important.

We need more people getting active! Thank you FreedomWorks!!!

Unfortunately, the QE is entrenching us into a long recession. The FED is blowing bubbles. The markets will now have to clear over-priced stock, assets and unsustainable debt before we can reach a truly sustainable recovery. QE is only destroying savings which is what is really needed for a lasting recovery. Low interest encourages more debt and discourages savings. We need more savings to correct the imbalances that caused the debt crisis to begin with. Thankfully, household savings in spite of the FED is increasing somewhat. That is our only encouraging development. But the sorry FED bastards are making it all the harder. Its all about taking care of bank balance sheets, not economic recovery. QE gives a temporary juice-up to the economy, but there is no escaping a recessionary period where savings have to be built up at the expense of spending. That's what neither the FED nor politicians will face up to. All they do is prolong the misery.

The Ballad of Ben Bernanke: Tragic Economic Error is Holding Him Back

Ben Bernanke is arguable the most well equipped Fed chairman America has ever seen, and I mean that sincerely!  His academic accomplishments are top notch; and his career as a public official is equally impressive. He has been a ranking member of some of the most influential and prestigious economics advisory councils and research groups in the nation. By all accounts, Ben is the best conceivable man for the job of Chief Central Banker!

1
06/17/2013
The Fed Cannot Employ, It Can Only Inflate
"https:\/\/www.freedomworks.org\/content\/fed-cannot-employ-it-can-only-inflate?social=facebook_share"
null
https://fw-d7-freedomworks-org.s3.amazonaws.com/styles/thumbnail/s3/te_social_media_share/fw_default_0.jpg?itok=35IWEBMb
Blog

The Fed Cannot Employ, It Can Only Inflate

Paul Krugman is at it again. The Nobel Prize-winning, devoutly Keynesian economist argued in a recent column that the thing needed to cure the sluggish American economy is, wait for it, more inflation. This is the classic Keynesian view that the Federal Reserve can stimulate the economy by inflating the currency.

0
05/13/2013
Republican Senators that Have NOT Cosponsored Audit the Fed
"https:\/\/www.freedomworks.org\/content\/republican-senators-have-not-cosponsored-audit-fed?social=facebook_share"
null
https://fw-d7-freedomworks-org.s3.amazonaws.com/styles/thumbnail/s3/te_social_media_share/fw_default_0.jpg?itok=35IWEBMb
Blog

Republican Senators that Have NOT Cosponsored Audit the Fed

Senator Rand Paul has reintroduced legislation to audit the Federal Reserve in the Senate. The bill, S. 209, currently has 24 cosponsors. This legislation is important because the people deserve to know who the Federal Reserve is bailing out behind closed doors. Here are the Republicans that have not cosponsored the audit the Fed bill yet. Please call them or tweet at them and politely ask them to cosponsor S. 209!

1
03/28/2013
In the War on Cars, the Left is Winning
"https:\/\/www.freedomworks.org\/content\/war-cars-left-winning?social=facebook_share"
null
https://fw-d7-freedomworks-org.s3.amazonaws.com/styles/thumbnail/s3/te_social_media_share/fw_default_0.jpg?itok=35IWEBMb
Blog

In the War on Cars, the Left is Winning

Detroit serves as a cautionary tale warning of long-term liberal leadership. As Michigan’s governor prepares a state takeover of the terminally troubled city, many blame the short-sighted policies of the local Democratic machine. To be sure, runaway pensions, red ink and union obstinance have helped hollow out the once-mighty Motor City.

1
03/04/2013
The World Has Not Solved The Problem of Inflation
"https:\/\/www.freedomworks.org\/content\/world-has-not-solved-problem-inflation?social=facebook_share"
null
https://fw-d7-freedomworks-org.s3.amazonaws.com/styles/thumbnail/s3/te_social_media_share/fw_default_0.jpg?itok=35IWEBMb
Blog

The World Has Not Solved The Problem of Inflation

Throughout the various rounds of quantitative easing enacted by the Federal Reserve in response to a persistently sluggish economy, advocates of loose monetary policy have kept a gleeful eye on the Consumer Price Index, pointing to the lack of measured inflation as evidence for the soundness of their ideas and the groundless paranoia of their detractors.

This past Saturday, September 22, marked the fourth annual End the Fed day. At Federal Reserve branches across the country, liberty activists showed up to call attention to the corruption and immorality of the Federal Reserve System.

UPDATE: Audit the Fed Up to 34 Cosponsors

Senator Rand Paul (R-KY) has introduced the Federal Reserve Transparency Act (S.202)—commonly called the Audit the Fed bill—in the Senate. As of today (9/20), the bill has 34 cosponsors.UPDATE: 37 COSPONSORS AS OF 11/14.Find out if your senators are cosponsors here.

If at first you don't succeed...Federal Reserve Chairman Ben Bernanke offered a robust defense of the effectiveness of the central bank's easy-money policies in his speech Friday at the Fed conference here, and left little doubt that he is looking toward doing more to give the economy a lift at the Fed's next policy meeting in September.