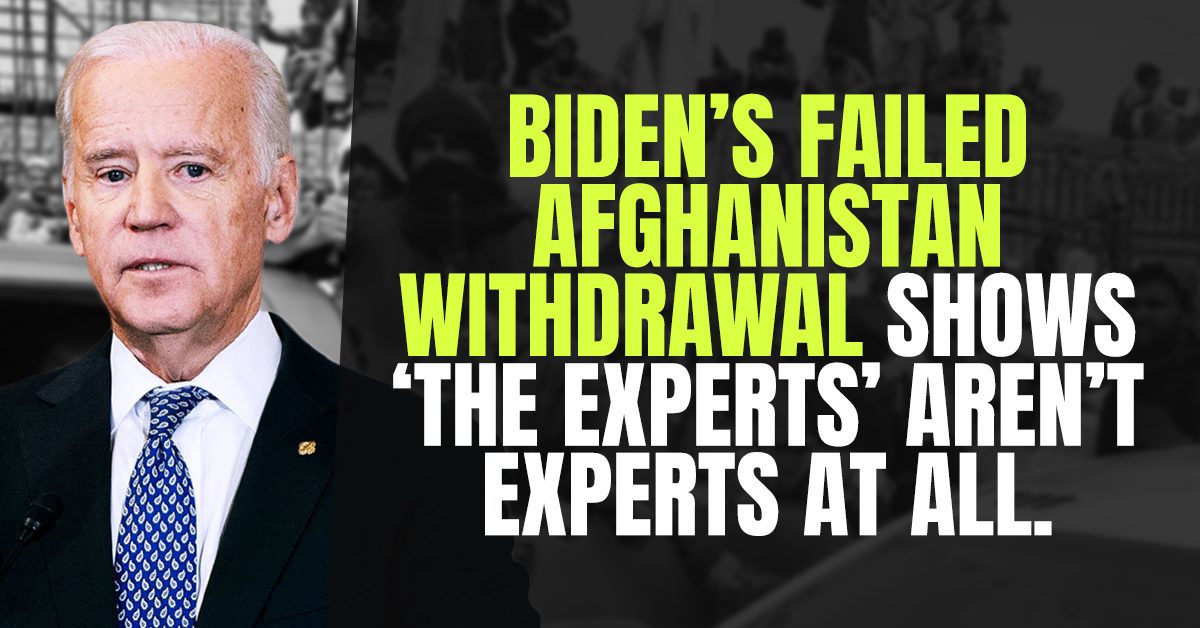 In recent weeks, the Biden administration began withdrawing American forces from Afghanistan. After trillions of dollars spent and thousands of American lives lost over the past two decades, it’s clear that the time for the United States to leave Afghanistan has come. But the lack of a plan from the White House’s supposed “experts” has resulted in a crisis that could have easily been avoided.

The Taliban is already executing Afghan troops who have surrendered and are actively hunting down American allies. While President Biden has deployed thousands of troops in an effort to protect the Kabul airport, it remains overrun with civilians attempting to flee. And, shamefully, many American military installations have been taken over by the Taliban. Military weapons paid for with our tax dollars are now in the hands of our enemies.

Americans are rightfully sick and tired of endless wars. Indefinite American military presence in foreign nations is antithetical to the notion of limited government. But as these wars come to an end, our so-called “experts” are supposed to form a coherent exit strategy. This includes making sure that those who fought with us are not abandoned, that our fellow citizens are able to return home safely, and that our own weapons won’t be used against us.

None of that is happening here. President Biden, who claims to be guided by “experts,” has ignored the facts on the ground in favor of playing politics. Sadly, because of some glaringly obvious errors made by the president during this withdrawal, Americans and Afghans will likely needlessly die. You don’t need to be an expert to come to this conclusion.

Biden’s first major mistake was demanding the withdrawal occur during the summer months rather than winter. Since August is considered part of “fighting season” for the Taliban, the group was able to advance across Afghanistan with ease once America pulled support. If the withdrawal happened as colder and more dangerous weather began to set in, the Taliban wouldn’t have been able to take so much territory so rapidly.

This was just the beginning of President Biden’s blunders. Reports have shown that members of Congress from both parties were trying to accelerate the issuance of visas to Afghan citizens who helped the United States during the war. This was largely ignored by the White House, which made no real effort to assist our allies before pulling back our troops and suspending air support.

If that isn’t bad enough, the Taliban has been actively emboldened by the Biden administration at the expense of American taxpayers. By allowing military equipment like guns and helicopters to be left behind at our military installations, President Biden has handed over even more control to the Taliban and threatened countless lives in the process.

The failure of our national security “experts” to plan for the Taliban’s rapid advance also has horrific consequences for the people of Afghanistan, particularly women and children. The Taliban has now taken control over all of Afghanistan’s provincial capitals, so the group has more power than ever before. By allowing the Taliban to quickly take over the entirety of Afghanistan, President Biden’s “experts” have ensured that millions of Afghan women and their daughters will be deprived of an education and basic human liberties.

Once again, it doesn’t take an expert to figure out that what we’re witnessing has grave implications for Americans’ already flagging trust in our government institutions. And given what’s happened over the last week, we need to be asking questions about what the White House and intelligence agencies knew about the potential consequences of such a hasty, poorly planned withdrawal. Biden and his “experts” were either woefully uninformed about the realities on the ground, or lied to the American people by dismissing fears of a Taliban takeover.

Unfortunately, this failure isn’t surprising to those of us who have witnessed Biden’s presidency descend into a downward spiral. Between inflation at its highest point in decades and rising gas prices, the wallets of Americans are hurting more than ever. And the mask and vaccine mandates promoted by the Biden administration are becoming increasingly unpopular with voters.

There’s no doubt that it was time for the United States to leave Afghanistan. But while it’s important that we leave, it’s equally important how we leave. It’s clear that Biden’s withdrawal from Afghanistan was poorly planned and even more poorly executed.

President Biden and his allies are fond of saying that they’re guided by “the experts.” But Biden’s “experts” aren’t really experts at all. And because the White House trusted “expertise” more than common sense, people are losing their lives.