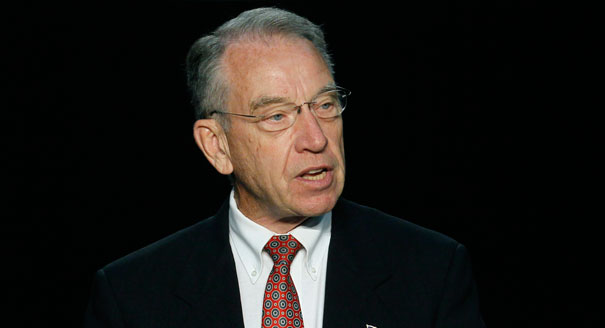 "During my leadership as governor, Texas shut down three prisons, and we saved taxpayers $2 billion," Perry said, according to the Free Beacon, referring to the 9.4 percent drop in the state's incarceration rate. "When I left office, Texas had the lowest crime rate in our state since 1968." These reforms also led to a reduction in the rate of repeat offenders.

"My administration started treatment programs and drug courts for people who wouldn’t be served well by sitting behind bars. We made sure our parole and probation programs were strong," Perry explained. "Most of all, we evaluated prisons based on whether they got results. Did an ex-offender get locked up again? Did he get a job? Is he paying restitution to his victims? In Texas, we believe in results."

Though the momentum is growing, some members of Congress are pushing back against justice reform. To his credit, Senate Judiciary Committee Chairman Chuck Grassley (R-IA) has expressed interest in moving civil asset forfeiture reform and prison reform, but he has been cool to the Smarter Sentencing Act, which would expand the "safety valve" for certain low-level nonviolent offenders and reduce mandatory minimum sentences for nonviolent offenses.

In a recent letter to The New York Times, Grassley criticized the Smarter Sentencing Act based on faulty information.

What's more, as well intentioned as they may be, federal mandatory minimum sentences for nonviolent offenses are themselves misguided because they are a top-down, big government policy that doesn't allow any flexibility for an offender's personal circumstances to be taken into account. This approach is ineffective and, given the heavy costs of incarceration, uses up valuable resources that could be more effectively spent keeping violent offenders off the street.

In 2014, the Congressional Budget Office determined that the Smarter Sentencing Act would save $3 billion in the 10-year budget window. The Justice Department estimates savings of $24 billion over 20 years.

Grassley also targets the proposed expansion of the safety valve, which would prevent mandatory minimum sentences from being applied for certain low-level nonviolent offenders. "According to the United States Sentencing Commission, unlike in the states, virtually no citizen is in federal prison for drug possession," he wrote. "Because a 'safety valve' eliminates mandatory minimums and lowers sentences for first-time offenders, most federal drug inmates are repeat offenders who did not respond to shorter sentences, and many have extensive criminal histories, including violence."

The Smarter Sentencing Act, as noted above, applies only to certain nonviolent offenders. Violent offenders would still face harsh sentences for crimes they commit. He also fudges the facts about federal inmates. In 2012, the U.S. Sentencing Commission, which has urged Congress to expand the safety valve and reform mandatory minimums, found that 53 percent of federal offenders are classified under Category I, which means they have little or no criminal history. The figure for 2013 is similar, at 49.6 percent.

Again, Grassley has been open-minded about some aspects of justice reform, but somewhere along the way, he has gotten some really bad information about the Smarter Sentencing Act. Here's hoping that Grassley will be amenable to analyzing and debating these issues in his committee, where his colleagues can present the overwhelmingly positive benefits of this fiscally conservative bill and change his mind.