This past weekend I had the privilege of attending a discussion with authors and radio hosts Dennis Prager and Hugh Hewitt. While the Sunday talk highlighted faith and culture over politics, Prager did share his oft-quoted maxim, "the bigger the government, the smaller the citizen."

According to a new Gallup poll, Americans are starting to agree. In an all-time high, 60% of Americans believe the federal government has too much power. 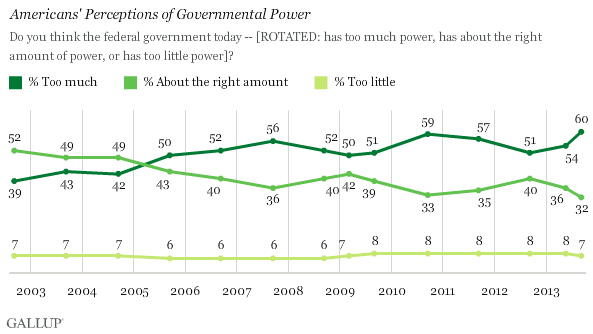 Since 2005 at least half of Americans have agreed that the Washington has too much influence over their lives. The discontent started to rise soon after Obama’s re-election. Just 7% believe the government has too little power.

Republicans, Democrats and Independents had pretty similar response rates during the Bush administration. By the end of his second term, the parties only diverged by seven points. The partisan split exploded as soon as Obama entered the White House.

The parties have different views on the optimal size of government, but it seems that many in the GOP were willing to give their guy the benefit of the doubt. And while the memories of 9/11 were still fresh in voters’ minds, many Republicans weren’t as worried about Washington’s growth.

If that seems hypocritical, consider the left. Perhaps for the first time in their lives, Democrats were uncharacteristically concerned about the size of a GOP-run government. The instant their party ran the show, liberals celebrated the leviathan state with unrestrained glee.

But today, six out of 10 Americans think government wields too much power. And who’s behind this all-time high? Democrats and independents.

Since the last presidential election, independents’ distrust of government jumped 10 points while Democrats’ jumped 13. While Gallup didn’t detail the reasons for the change, it stands to reason that the scandals of the past several months — especially concerning the NSA — have eroded everyone’s confidence in Washington.

It’s good to see Americans of all stripes question the massive size of the federal government. Yet, the argument for a less-powerful Beltway isn’t merely a matter of saving money, increasing efficiency or promoting an ideology; limited government is a moral issue.

As Prager notes, when people rely more and more on the state, their personal and work ethics atrophy. They develop a sense of entitlement and focus more on vacation days than work hours. They stop helping their communities and instead demand that government fix the problems. They aren’t as interested in professional advancement since politicians will simply take their extra earnings.

It is past time that we shrink our government, so that each citizen has the opportunity to be great again.

Ironic how the GOP and their shills seem to think they have the right to tout the flag of smaller government when they have been every bit, and in most cases-more responsible for the growth of government. So when I see comments like these made by a corporate-sponsored astroturf site I can't feel but think that I must be smelling irony.

Democracy and Power 102: Voters are Rationally Ignorant Democracy is a pathetic belief in the collective wisdom of individual ignorance. —H.L. Mencken

President Barack Obama believes that if he repeats the lie often enough, people will start to believe it. He's made endless overtures in which he repeats the refrain that ObamaCare is "working pretty well in the real world."