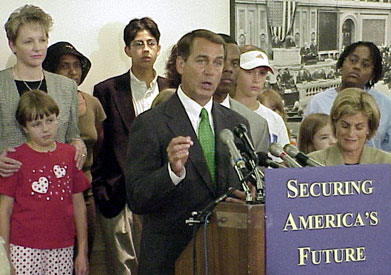 Once a leader on school choice, will Boehner be again?

When Barack Obama assumed office in 2009, one of his first actions was to put an end to the popular and successful D.C. Opportunity Scholarship program that provided disadvantaged students with greater choice in education.

Despite multiple studies indicating that the program increased graduation rates, reading scores, and parental satisfaction, the president has consistently been critical of D.C. vouchers. Enter Speaker John Boehner who attended Obama’s 2011 State of the Union speech in the company of parents, children and teachers who had benefited from the program. The following day, the Speaker introduced a bill to restore the program, a bill which ultimately passed.

Dissatisfied with this, Obama proceeded to cut the program’s funding in 2012, but scholarships are still being issued today, albeit in limited numbers. In the 2014-2015 school year, only about 10 percent of new applicants received vouchers to attend schools of their choice.

With the new Republican majority in Congress, Speaker Boehner has an opportunity to once again emerge as a champion of school choice, and a reformer of the country’s education system. With the Obama administration continually extending its reach to meddle in the field of education, it’s more important than ever that we have principled and bold reformers in the House and Senate who are willing to stand up to an out of control Department of Education.

This year, education is once again going to be a major theme in the president’s State of the Union address. It would be great if the Speaker would continue his tradition of fighting for school choice in an era marked by calls for greater centralization and conformity.