Boehner is No Conservative, No Matter Which Party is in Power 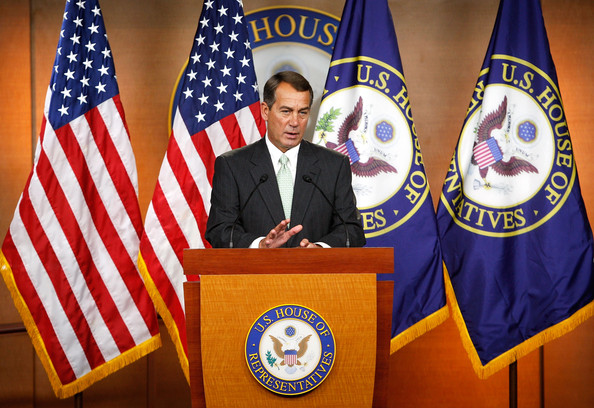 Boehner attempts to explain himself, fools no one.

In a press conference today, Speaker John Boehner tried to sell himself as a true conservative, touting his supposed reforms and lamenting that there was only so much he could do with a Democratic president in the White House. Oh, cool. So if we get a Republican in, Boehner will suddenly turn around and be super-conservative, right? Too bad history tells a different story.

From 2001 to 2009, it will be remembered that George W. Bush - a Republican! - was president. If we take Boehner at his word, we should expect to see a principled stand on matters of spending. Let's go to the tape.

In 2002, Boehner voted to increase the debt by $450 billion. Ouch, that isn't good. But everyone has a bad day now and then. Maybe it was just a fluke.

In 2005, he was complicit in a scheme to raise the debt limit by $781 billion by voice vote, to allow Republicans to avoid going on record on the matter. Oh dear...

So, in total, John Boehner voted to increase America's debt by 3.631 trillion-with-a-t dollars under a Republican president. So, don't believe him when he blames Barack Obama for his inability to lead a conservative agenda. The truth is, he has never been a conservative. It's time we had a Speaker who actually believes in fiscal responsibility instead of just saying it.

If you are serious about removing Boehner then support his only conservative opponent. jdwinteregg.com or @JDWinteregg on twitter.

The real political spectrum ranges from libertarianism to authoritarianism. Thomas Jefferson in his day was considered a liberal, as the words liberal and libertarian come from the same root word, the Latin word līber meaning free. These words liberal and conservative have been corrupted in politics. This has been done to divide the American people.

What we want is more freedom, and that's not being conservative. We don't want to conserve all the authoritarian nonsense we have. We want to get rid of it. We want more freedom, which is the libertarian viewpoint.

I disagree. A conservative is not the status quo. Those who claim they are like Boehner are counting on a low information voter. Check out jdwinteregg.com read the issues and where he stands. I know him and he is an honest man who is listening to the people in Ohio's 8th district. Please support him.

The Tea Party is where the true Constitutional Conservatives have gone and the numbers are growing every hour of every day. We still have to operate under the banner of the GOP because we are not an official party but it will happen if it has to albeit not in time for the General Election of 2016. We have to have Conservative leadership to take this country back and if the GOP doesn't come to it's senses very quickly the Conservative that leads the charge for Americans to take back our country starting in November 2016 is going to come from a third party or write-ins. The GOP has the lobbyists and the C of C support and some of big business but there are even some of the big corporations that have had to leave this country to remain solvent who are moving back to where the GOP has always been and the reason I was a Republican for almost 50 years. What the GOP is becoming today is not consistent with my values and I am just one of many millions who agree with me. We are fighters, we are patriots and we will do whatever it takes to stop the bleeding of this country and get us turned around and headed in the right direction. The GOP can get on our band wagon and see what victory feels like again or they can continue down the road they are on now and I can assure them it is nothing but a DEAD END!!! If we have to fight them and the Liberals too (many of them have already moved way too far to the left), so be it. We can draw our line in the sand too and we've already done it.

I love it. You guys are so busy trying to accuse one another of not being "conservative" enough that you're not even paying attention to the democrats anymore. Let me give you a small hint: if you keep losing elections the answer isn't to redouble efforts on becoming even more conservative. Clearly the general public has moved on.

The core question is not purity of belief, but who our leaders identify with. Do they identify with the Providence to which our Founders gave firm reliance for "protection" and credited with "many signal interpositions...in favour of the American cause? Do they identify with the thread of the American covenant running from the Mayflower Compact through the Fundamental Orders of Connecticut and Declaration of Independence through the Articles of Confederation and the Constitution of the United States? Do they look through that old Declaration of Independence and find that those old men say that "We hold these truths to be self-evident, that all men are created equal," and feel that that moral sentiment taught in that day evidences their relation to those men, that it is the father of all moral principle in them, and that they have a right to claim it as though they were blood of the blood, and flesh of the flesh of the men who wrote that Declaration, and they link to Lincoln's "electric cord in that Declaration that links the hearts of patriotic and liberty-loving men together, that will link those patriotic hearts as long as the love of freedom exists in the minds of men throughout the world"? Do they identify with the people of the United States, or with the sacrifices of generations of the Americans who left home and family for the unknown, and died by more than a million starting with the Revolutionary War?

Or do they identify with their own elite class, fellow alumni of what a reviewer of Rick Boyer's 2011 "Take Back the Land" called "a 2 class educational system:,, If `public education' is suppose to be the great equalizer and field leveler- then why are our leaders not coming out of it? Why do they come from a completely different educational track? And a small one at that." Do they in reality identify with their fellow elites across the globe, including those from peoples hostile to all American values? Do they join in the ostracizing of Donald Trump, because he is pointing out the yearnings and sufferings of Americans in flyover country of which they are totally indifferent to, so long as the negative consequences of the policies backed by their elite class don't impact themselves? Do they really identify with Darwin and Hegel and the whole spectrum of anti-Western Civ Germanic philosophic thought as their real spiritual and ideological forefathers? Since -President Coolidge, the GOP has never won a single election unless its candidate struck a chord with the voters by showing he was on their side and not with the elitists (even if it always proved pretense except in the case of Ronald Reagan).